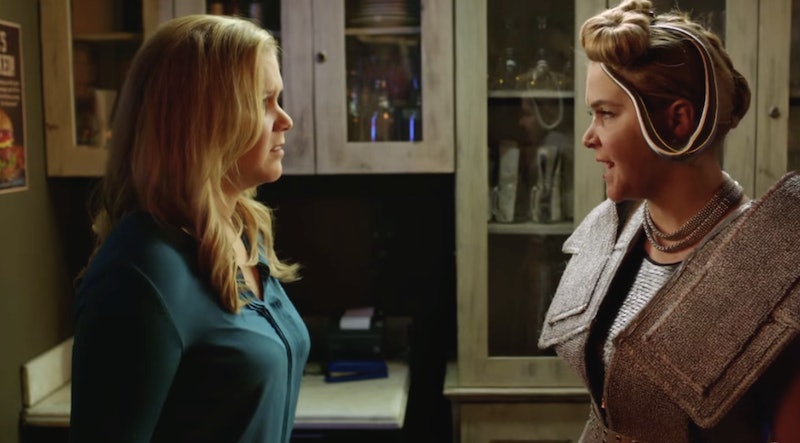 There is a popular Tumblr text posts that asks the very important question, "If a Future Me doesn't come back to tell me not to do it, how bad of a decision can this be?" Leave it to Amy Schumer to parody The Butterfly Effect in an attempt to teach us all exactly how bad a decision that can be — and exactly how bad having your Future Self come to warn you about something is. On Tuesday, the "Future Amy" sketch on Inside Amy Schumer introduced us to Schumer and her boyfriend of two weeks, Travis, who was asking her to move in with him. Although she was initially excited about it, Travis heads to the bathroom, and Future Amy appears in his seat to warn her about some very important events. Like that Travis will cheat on her, give her gonorrhea and bed bugs, but that she has to move in with him anyway because, if she doesn't, California will be submerged in water. Somehow.

Just when you think that Schumer is resigned to a very dark fate (bed bugs!!), she discovers that that Future Amy isn't the only Future Amy who is coming back to warn her about... her future. In fact, all the Future Amys have completely conflicting advice for what Schumer should do at this crossroads in her life. Should she move in with Travis? Break up with Travis? Kill Travis? Does he, or does he not, need to be given a "beej" for the safety of the world? What does any of this have to do with anything at all? That is an excellent question, but not one you should be asking when you dive into this hilarious sketch.

I mean, we all think that getting advice from our Future Selves would make living so much easier. If only someone had come back from the future to warn you that eating that container of leftovers from the fridge would give you food poisoning, or that that guy you hooked up with at the bar last night was actually married. I mean, really. If the future ever really does invent time travel, I will, quite frankly, be offended that my Future Self never decided to use that technology to come and help me avoid some pretty choice mistakes in my life. But, then again, if too many of your Future Selves start coming back to prevent or ensure that you do things to their liking so that their future will go a lot better, that would dissolve into madness pretty quickly.

Of course, Schumer takes the concept and elevates it to something even more hilarious, but it also teaches us a very important lesson as well. After all is said and done, the one thing to take away from the "Future Amy" sketch is this: Schumer looks amazing with bangs. Check out the full clip below.