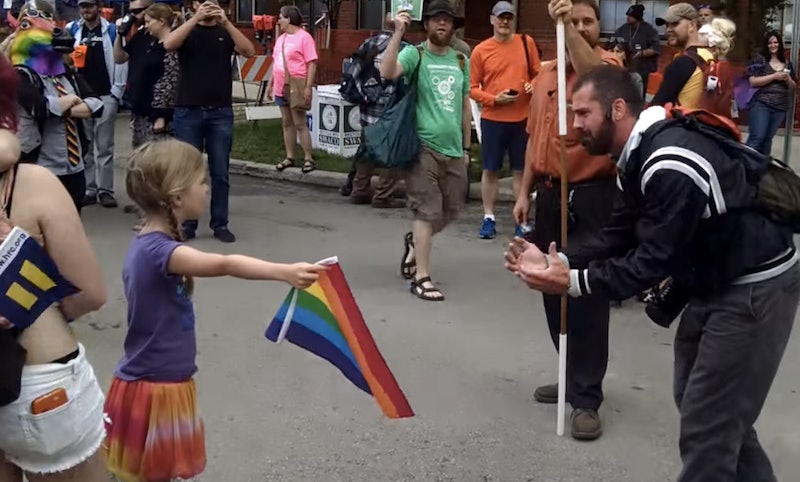 The day after the SCOTUS ruling that legalized same-sex marriage, people in Columbus, Ohio were raging at the ComFest music festival, where a lot of them were getting their pride on. A few naysayers themselves to the party in an attempt to kill the vibe, and although they served as a reminder that we still have a long way to go in terms of tolerance and equality across the nation, festival goers were heartened to see this little girl hold up a rainbow flag to stop a preacher who was ranting against same-sex rights. Basically first grader Zea Bowling is a tiny badass, and I want to be her when I grow up.

"Zea didn’t just flash the flag at that hatemonger, and bail," wrote her father, Ryan Bowling, when he shared images of the showdown on Facebook. "They went toe to toe, for several minutes, while he bellowed all of his fire and brimstone right in her face. Grown man vs first grader. She told me afterward that she did feel scared. The one thing the people of ‪#‎comfest2015‬ never let her feel though? Alone."

Someone caught some of the encounter on camera, where you can watch Zea's determination, and see the awesome people who came by to high-five and fist bump her:

Here's the inspiring video in full:

Already the encounter has gotten so much attention that a shirt has been launched depicting the scene:

Now you can own the most badass threads on the block, available for $18-$28 starting on July 13. In the meantime, I'm going to be making my own shirt: ZEA FOR PRESIDENT, 2042.