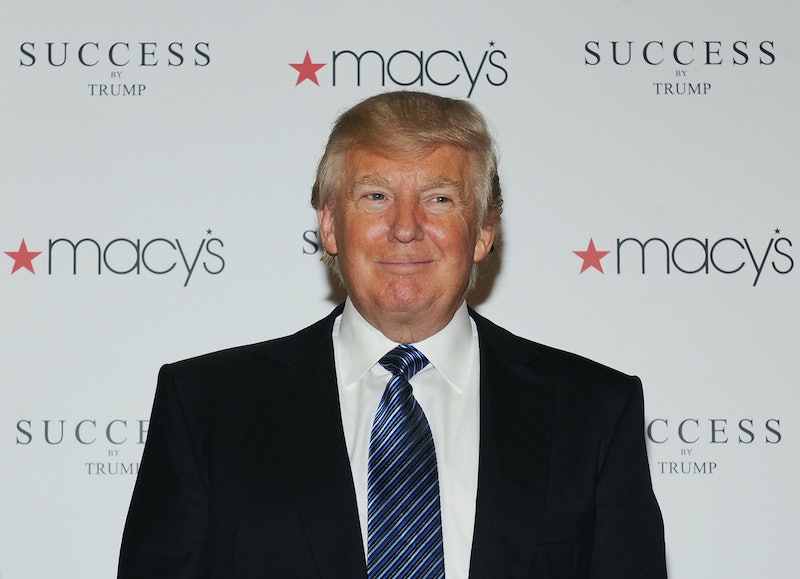 Looks like announcing for president might have been the worst business move Donald Trump ever made. Having declared in his campaign announcement that Mexican immigrants were "bringing drugs [into the United States], they're bringing crime, they're rapists," NBC and Univision killed their contracts with Trump, and now Macy's has cut ties with The Donald. Oh, and Mexico has also refused to send a contestant to the partially Trump-owned Miss Universe. Trump has responded to the failed business (and diplomatic!) relationships by blasting (and suing) everyone in sight, including calling NBC "weak" and "foolish." Trump maintains that it was he who cut off Macy's, not vice versa.

700,000 people had signed a petition calling for Macy's to cut off Trump. In a full statement released Wednesday morning, Macy's said:

We are disappointed and distressed by recent remarks about immigrants from Mexico. We do not believe the disparaging characterizations portray an accurate picture of the many Mexicans, Mexican Americans and Latinos who have made so many valuable contributions to the success of our nation. In light of statements made by Donald Trump, which are inconsistent with Macy's values, we have decided to discontinue our business relationship with Mr. Trump and will phase-out the Trump menswear collection, which has been sold at Macy's since 2004.

Ironically, although pretty much everybody thought Trump running for president was a bad idea (I'm not including Trump in this), his campaign showed no sign of negatively impacting his business relationships — until his ill-thought-out, somewhat rambling campaign introduction speech, in which he made disparaging comments about Mexicans, along with a whole lot of other things that made very little sense. Who knows — maybe it'll be his ill-fated bid to lead the free world that will finally reduce Trump's power.

Trump responded to Macy's announcement by insisting that it was he, in fact, was behind the severed relationship, thanks to Macy's lack of faith in Trump and his shirts being made in China. In a statement, his campaign said:

I have decided to terminate my relationship with Macy’s because of the pressure being put on them by outside source. While selling Trump ties and shirts at Macy's is a small business in terms of dollar volume, my principles are far more important and therefore much more valuable.