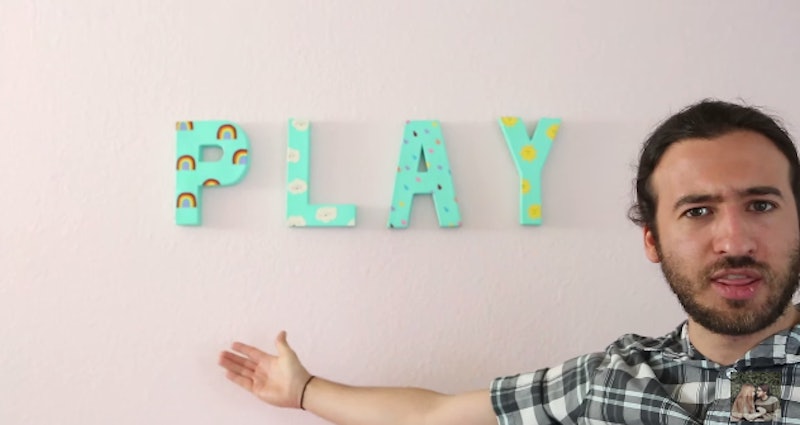 Ahh, throwback MTV. What a comforting slice of pixelated nostalgia. Almost makes you wanna paint your pinkie nail black as a quiet ode to days gone by. Ready for a quick brain explosion? There were 17 freaking seasons of MTV Cribs . 17! Sadly, the official series came to a dismal halt in 2013—however, one amazing dude resurrected it. Yep, a dad gave an MTV Cribs tour of his baby daughter's room, and it's nearly perfect.

I not-so-secretly constantly wish MTV Cribs still aired and I could somehow appear on an episode. I mean, it's not like my pad is Pinterest perfect or anything, but when I pull of a really killer gallery wall or assemble a bouquet of yellow daisies in emptied Topo Chico bottles on the windowsill, I want some gushing congratulations. It's not too much to ask for a little glory, some acknowledgement of your badass decorating skills. Plus the really jagged camera cuts and angles and club-tastic soundtrack were enough to make even the most mundane dwelling look so dope. (Anyone else remember Seann William Scott's couch bed? I can't find the clip online, but there is the rather illuminating video diary that gives you an idea.)

Dad Bryan Canatella gives his young daughter's room the bangin' Cribs treatment in a way convincing way. Would you get a load of this camera work?

There are wings to this set-up, y'all. Seriously. See the whole impressive affair below:

Cici is basically already made, as far as I'm concerned. The only thing that could further contribute to the awesomeness of this video is a little panning over ~the posse~ casually chilling on the pastel rug or something. You know, as the posse does. Let's review some of the best segments of MTV Cribs still alive and well on YouTube. After all, it's almost a holiday weekend, and you could use some decor inspo, right? Right!

Not my favorite commentary on the naked, armless lady statue, but I do like the fridge tour in particular. "We drinkin' in here." Word.

Who could forget Mariah Carey has an actual Forever 21 location within her Tribeca home?

Can I move into this bathtub, please?

Just um, pretend you didn't hear it all from Holly Madison when watching this?

More like this
Rihanna & A$AP Rocky’s Astrological Compatibility Proves They'll Be Amazing Parents
By Nina Kahn
TikTok’s “Miley Stewart Summer” Trend Will Make You So Nostalgic
By Courtney Young
Kris Jenner’s Advice For Kim Kardashian Is Going Viral On TikTok
By Courtney Young
The Viral TikTok “30,000” Sound Fits Nearly Every Scenario
By Courtney Young
Get Even More From Bustle — Sign Up For The Newsletter