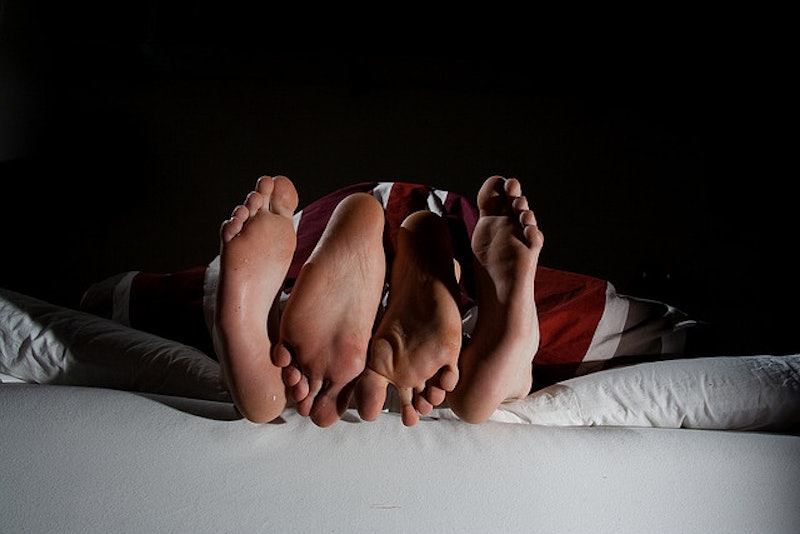 We may no think about it, but how we talk about sex has changed through history. While today it’s often used during brunch time conversation in regards to the who and what of a Friday night, that was not always the case. According to Stef Woods, who teaches history at American University, if we go back in our history, the word “sex” used to be used to describe the difference between men and women, whereas today it’s not just about brunch time convo, but gender and the gender that has been assigned at birth.

How do they know this is the case?

Well, historical evidence aside, researchers at FRac.tl, in collaboration with a UK-based company called Dr. Ed, ran 15 commonly used sex-related terms through out history and calculated them up through the Corpus of Historical American English, a database by Brigham Young University that contains, and I quote, “115,000 textual sources and roughly 400 million words written and spoken between 1810 and 2009.” Why such a database exists is beyond me, but it does.

From the database, researchers were able to figure out the context for each time “sex” was used within 10 words before or after. What it found was that the use of the word “sex” jumped in the late 1820s through the 1840s. Not that this means that men and women were finally talking about sex in the way that we do today, but the thinking is the beginning of the women’s right movement opened up the conversation about sex, at least in regards to gender.

By the time the 1840s came to an end and the 1900s kicked into gear, the use of the word “sex” was far less because, as Woods notes, The Victorian era sort of put the whole sex discussion, even when it comes to gender, on hold.

When the 1900s rolled around and women were allowed to vote, again there was an increase in the word “sex.” Shortly there afterward, it dropped, but by 1925, the era of the flapper thanks to F. Scott Fitzgerald’s The Great Gatsby, the word became more popular again. Then there was a drop in the use of the word during the Reagan era, as there may have been shame involved with sex because of the HIV/AIDS crisis that pushed for an abstinence-only lifestyle.

The most interesting part of the research is under what context the word sex was being used. In the 1820s through the 1840s, it was in the context of age, foremost, then women secondly. The 1920s also saw a shift upward in the context of women, and in the 1970s the word “sex” was most closely related to education.

Nudity, although a relation to the word sex in the 1990s through 2009, was only an associated with sex a sliver of the time while all the other decades before apparently refused to connect the two.

The word sex and what it means is forever changing, as is the society in which it exists. What it means today is probably a shadow of what it might mean a decade from now, which is good thing. Sex, and its meaning, should have room for interpretation and growth.

More like this
What Mercury Retrograde Spring 2022 Means For Your Sign's Sex Life
By Nina Kahn
Help! My Partner Only Wants Sex Late At Night & Won’t Compromise
By Sophia Benoit
Ask A Sex Therapist: Is My Sex Fantasy Normal?
By Madison Malone Kircher
23 Abortion Funds In States With Trigger Bans To Donate To
By Emma Carey
Get Even More From Bustle — Sign Up For The Newsletter