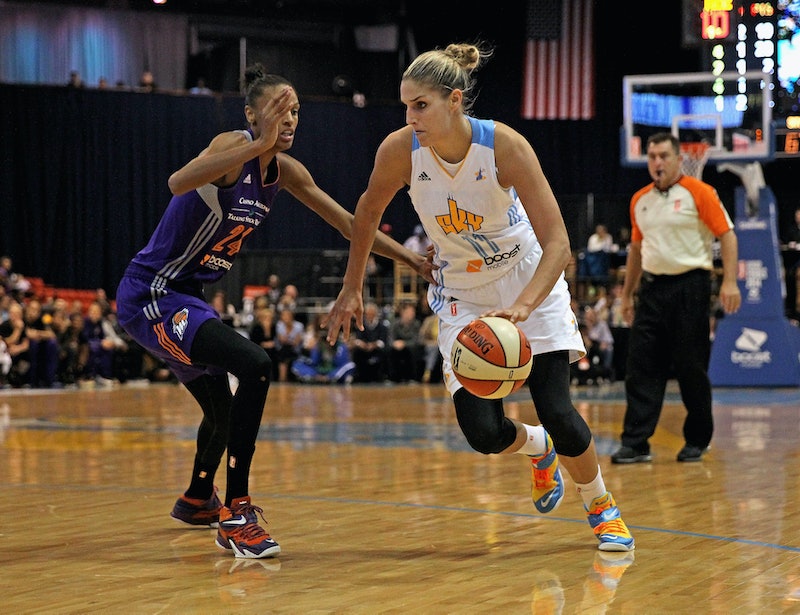 There's so much sexism and so many gender double standards in sports that it's hard to know where to begin. But for today, let's start with this video of WNBA star Elena Delle Donne reading mean tweets. Because not only do people apparently have sexist views towards women's sports, but they also don't feel any hesitation sharing these opinions in a public forum. But isn't it great we live in such an enlightened time?

Delle Donne, who plays for the Chicago Sky, scored an amazing 45 points in a recent game against the Atlanta Dreams — including 19 out of 19 free throws, a WNBA record. The Sky won the game in overtime 100-96. And yet, in spite of this being an obviously exciting game and Delle Donne's clear skill on the court, people on Twitter just don't seem to think that women playing sports is worthwhile — and after Sports Center tweeted about the game, the sexists came out of the woodwork. Because clearly, athletic prowess is only cool if men do it.

On the Sky's YouTube channel, Delle Donne gets to read responses to the Sport Center tweet in the style of Jimmy Kimmel's "Celebrities Read Mean Tweets" segment. The whole thing pretty much exemplifies the outdated, sexist perceptions that hold women's sports back from having more popular appeal.

Here are a few examples of things people actually think about women's sports in the year 2015 — and proof that we still have a long way to go when it comes to creating a world that's welcoming to all people, not just some of them.

Hahahaha, kitchen joke! It's funny because the punchline rests on the assumption that times were better back when women weren't allowed to pursue their dreams like fully realized humans because that would have interfered with us being full-time, unpaid domestic help for the men who supposedly loved us. Isn't that great?

You know what? I'd like to see you try. Or I would, but since that would involve women playing sports, it obviously would be more fun for me to watch paint dry.

And infuriatingly enough, these are only the tip of the iceberg when it comes to offensive tweets. But Delle Donne's responses are pretty great. You keep being awesome!

More like this
Rihanna & A$AP Rocky’s Astrological Compatibility Proves They'll Be Amazing Parents
By Nina Kahn
What Is Jeanie Buss' Net Worth? The Lakers President Is Uber Rich
By Hugh McIntyre
Jake Daniels Just Became The UK’s First Active Football Player To Come Out As Gay Since 1990
By Sam Ramsden
The Sun Tarot Card Meaning, Explained
By Brittany Beringer
Get Even More From Bustle — Sign Up For The Newsletter