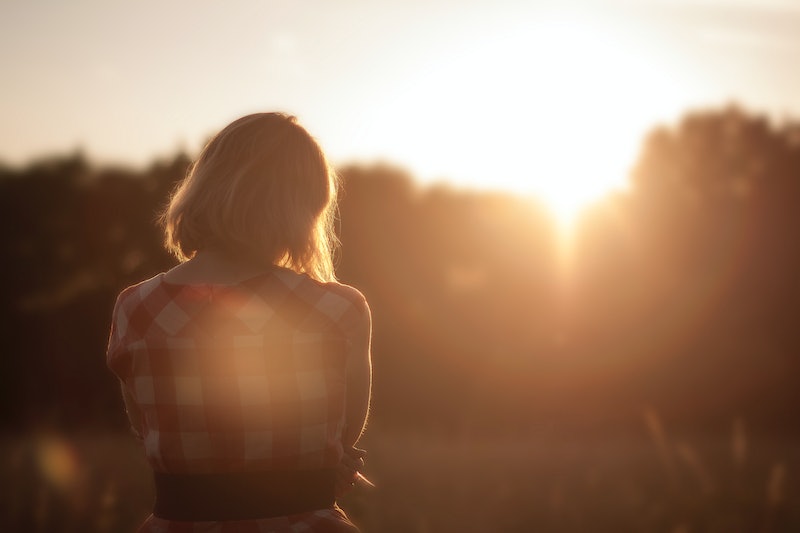 Breakups are one of those universal shitty things everyone experiences at least once. Then there are some of us who endure one breakup...then another. And another, and another, and another—listen, I've done this a lot and survived. I'm a person who doesn't like to endure hardships in vain, I try to learn something lasting from them. As such, I developed a pretty solid protocol of ways to take care of yourself after a breakup.

When a relationship ends, it's normal—expected—to feel badly. If you pack up and haul ass from Relationship Island without an ounce of dread or sadness, congrats, you're a sociopath. And you likely wasted someone's time and energy and yeah, please feel free to quit reading now. Assuming you're a human with a pulse and a heart, any romantic split will sting some. Even though you intellectually know that pain is finite and fleeting, it does little to temper the throbbing. There are ways, however, to push forward in a healthy way. You can use this experience as a directive push to grow. And why wouldn't you? You have to deal either way, might as well get more badass because of it.

Self-preservation, yo. Here's some tips on how to take care of yourself during a breakup:

Get your shit back immediately

And get them theirs back, too. ESPECIALLY APARTMENT KEYS. Not because you fear for your safety, necessarily, but because you don't want to wake up two months from now and think, "Oh, whoops. That person might still carry direct access to my home." It's an unsettling feeling, regardless of the terms y'all parted on. Do this as quickly as you can, preferably through a mutual friend or in any way that doesn't force you two to be physically in the same room. Things are raw so this is gonna suck, but it'll suck less if you hurry up and get it over with. If y'all don't have anything of particular value of each other's then skip this tip.

This seems harsh, but hear me out: You don't need to check in on them and they don't need to check in on you. Keeping up with them from afar and with the deceptive filter most social media embraces will not make you feel better. If they're doing well, you'll feel like trash. If they're doing poorly, you'll feel like trash. There's no good possible outcome in this scenario so halt it from ever beginning. Should the temptation grow too wild and you feel the need to block them, give them a polite heads-up for your own sanity and then do that.

Once you made the split official, got all your stuff, said all that needed to be said, it's smart to take a break from communicating with your ex. It can seem tempting to turn to them when you're hurting since you likely got used to that in the past. Now, though, it's no longer appropriate. It'd be cool to be friends one day, but time must pass and boundaries must be laid. There's no way it can happen immediately without getting toxic fast. You can't worry too much about offending them or how they'll react to this. You gotta worry about you, bb.

I know gardening isn't everyone's bag, but tending to something that isn't your rapidly diminishing personal hummus supply (breakfast hummus is a legit option when wallowing through a breakup, trust) gives you perspective and a necessary break from focusing on you. Plus, if you start something from a seed, the plant's growth is a really positive, visual representation of time passing. Think of how much has changed since it was only a small seed in a coffee canister of dirt. Think of how much you've grown, too.

Do a giant load of laundry

Wash everything. The clothes you've been avoiding, towels, bedsheets (especially). You know what? If the relationship was a long one and you can afford it, buy new sheets. High thread-count ones. But seriously, getting the smell and ~presence~ of your ex off all your fiber belongings is a good start.

Clean the hell out of your apartment

Borrow a vacuum or mop if you don't have 'em. Throw on some of your favorite records from high school, pour a tall glass of something, and get to business. Not only does this make your place more livable and easy to exist in, it's truly a therapeutic experience. Let it be a metaphor for purging your brain and heart. Also, if you have roommates, this should win you points there. Burn and wave around some white sage, too, if you're into that witchy shit. (I am.)

Add an herbal sleep aid or other relaxing practice to your bedtime routine. One of the toughest adjustments to a serious relationship ending is relearning how to sleep alone. You've grown accustomed to this other possibly enormous and loudly snoring body as a bedmate so going without it could cause sleeping problems. Nip that in the bud with a new addition to successful catch ZZZZs solo, and enjoy starfishing it up across the bed alllllllll to yourself.

Get into serious baths

This helps heaps in addition to the above blurb. You don't have to drop crazy dollars on fancy bath stuff (save those for bourbon, which goes really well with baths). Try your hand at DIY-ing a bath bomb, or just squirt in some shampoo while the water runs to make some decent bubble action. If you really wanna go next level, safely position your laptop on the closed toilet lid as you enjoy Netflix from the perspective of a human bouillon. A former boss taught me that one. Some of the best advice I've ever received.

Perhaps a touch superficial, but paramount, IMO. There's a sick sense of satisfaction to rocking a fresh, adorable pair of undies this human has never and will never see. Try it and tell me I'm wrong and I'll tell you you're a liar.

Accompany a pal to a yoga class or join a gym and make a promise to yourself to hit it for X amount of time X times per week. And hold yourself accountable, too. Like Elle and I have said before, endorphins make you happy. Exercise can help stave off any depressive or anxious tendencies, not to mention the obvious: You're single now. Work it.

Folks spend years with partners who aren't "sushi people." Can you imagine?? Now's the time to get back in touch with all the activities, food, music, etc. you adore your ex never tolerated. Maybe your ex never much liked you rocking bold nail polish. Go ham and do each nail a different, violently bright color. Just because you can! Conversely, acquaint yourself with stuff your ex actively hated if you're feeling extra bitter. For example, an ex of mine loathed HIMYM. So guess what I ended up marathoning despite lukewarm feelings for a whole summer. At least now I get references on the Internet more.

It's tempting to sprint right into another set of arms but that's like putting a Band-Aid on a bullet wound. Really, though, it's more like putting public restroom germs on a bullet wound. It's a momentary distraction destined to just make everything more complicated and difficult to deal with later, whenever you decide to start. If you have to do something, join Tinder, but don't actually engage at much length or meet up with matches IRL. Do it for a 12-hour stretch, delete it, then go outside or something.

The post-breakup haircut is a trope for a reason (*casually flips freshly-lops locks around*). It's smart to pamper yourself to some degree and feel as posh as you really are.

Focus on platonic relationships and intimacy

Now's a good time to direct energy to fostering healthy friendships. Find comfort in those bonds that don't necessitate you shaving certain areas. These are the lasting relationships worth spending time on, guys.

It's important to feel sad sometimes. It's a sign that you're human. Sometimes it can be difficult to create a ceiling for yourself, but it still needs to happen. Don't fall victim to really indulging that sadness by certain activities. Say you and your ex used to regularly spin a certain record. Put that shit in temporary retirement. Say you unearthed a renegade flannel from your ex and feel tempted to bury your face in it and sob. Literally throw it into the trashcan. Say you used to book mad hours as a kid watching Wonder Years and think about your future in a wistful, optimistic way then you found a marathon of it on TV. Unplug your device and leave your apartment. Again, feel things, but don't let the sadness swallow you whole.

Set a deadline for yourself

In support of staying alive and somewhat sensible, you have to make a hard, defined decision on when this period needs to end for you. You can't avoid the grieving process—trust me, I've tried, and it only causes the pain to wash up at an unexpected time and crash over you much harder than if you just dealt with it earlier. You can, however, avoid losing yourself in the fight back to being OK. Sit down (possibly with a trusted friend, if you want) and select a reasonable time to stop allowing yourself to actively hurt. "Come August, I'm moving on wholly." "When baseball season ends, so does this." As the day arrives, mentally prepare yourself to really push forward and stop marinating in pain from the past. Keep telling yourself you're OK and eventually it'll be true. Focus on your future. Focus on right now.

Obvs. You're pretty dope, bb. And you can get through this.

More like this
Got Brain Fog? Here Are The Best Supplements For Memory & Cognition
By Carolyn Steber
10 Ways To Be More Empathetic To Your Partner
By Raven Ishak and Lexi Inks
The 19 Best Tweets & Memes About Bisexual Awareness Week
By Lexi Inks
This Psychological Effect Might Be Keeping You From Hitting Your Goals
By Lexi Inks
Get Even More From Bustle — Sign Up For The Newsletter