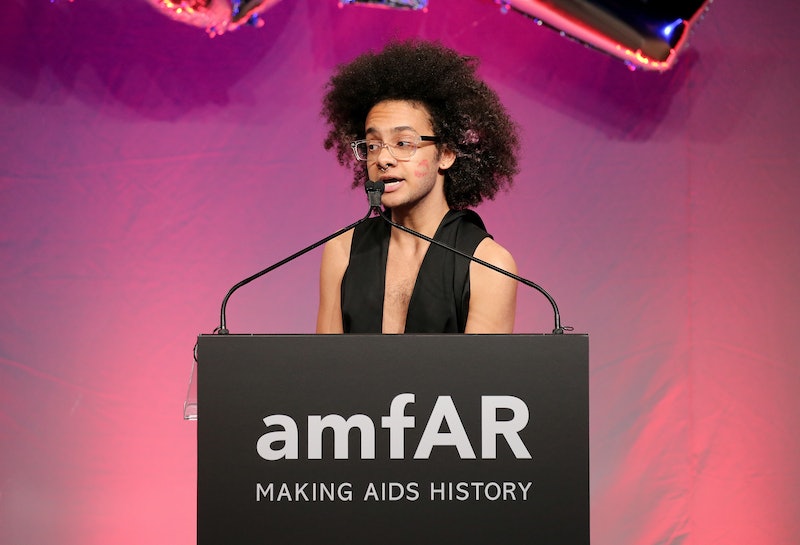 The landscape of gender normativity has been challenged on many counts this year, from Caitlyn Jenner coming out as a transgender woman to model Geena Rocero's Ted Talk revealing the doctor-prescribed sexual assignment she received as a baby and has since overturned. Now, poet and journalist Tyler Ford is encouraging the public to contemplate a facet of the topic that has been neglected thus far but deserves equal attention: what fashion means to someone who identifies as agender.

In a powerful essay for Racked, Ford affords readers a glimpse into the life of someone who chooses to live outside the bounds of society's limited views of what makes someone male vs. female, rejecting conventional categorization in favor of the designation "agender." Ford's thoughtful and thought-provoking essay is a wealth of insight into the life of an agender individual, but also touches on the rapidly shifting map of the Millennial world and the uncertain process of coming-of-age in a world intent on branding, labeling, and often stereotyping, frequently to damaging effect.

Read on for the most poignant lessons to take away from Ford's essay about shopping and embracing fashion as an agender individual.

1. Benevolent Inquiry Is Welcome, But Unwanted Labels Are Not

Ford explains in their essay that well-intentioned questions from those curious about gender norms are simply an integral facet of the learning process, but uninvited denominations are not. "My Instagram account is littered with comments that read, 'Is that a boy or a girl?'", Ford reveals. "I enjoy when other people are made to question their assumptions about gender through looking at me, though I hate when they do so by trying to stick me into a box."

2. Clothing Can And Should Be Experimented With, No Matter What Your Sartorial Inclinations Or Gender

Throughout their essay, Ford discusses the process of discovering their agender identity through various forms of sartorial experimentation. The conclusion they arrive at is that clothing, like gender, should not be limited based upon societal expectations.

3. Embrace What You Enjoy Wearing, Even If Your Style Differs From Your Dormmates, Co-Workers, Or Friends

While studying at Vanderbilt, Ford matriculated with female students who conformed to a very precise definition of femininity, an aesthetic with which Ford didn't feel a connection. When the piece of clothing doesn't fit literally or figuratively, choose something that does. "In a sea of white girls in sundresses and cowboy boots... I wonder if I will ever belong anywhere. I buy a pair of cowboy boots and never wear them. I try on the sundress I wore to my high school graduation and feel like a liar," Ford recalls.

4. One's Sexuality, Gender, And Sex Are Often Conflated — But Each Is A Distinct Facet Of Personal Identity

Throughout their essay, Ford muses on the roles one's biology, sexual preferences, and chosen gender play in the creation of a personal identity. One's biological sex is often assumed to dictate one's gender, and sexuality is often conflated with one's biological sex, when in reality the three components interact or diverge in a manner unique to each individual person. Ford recollects Vanderbilt coeds utilizing the facetious greeting "Sir" when Ford sported oversized jeans and tank tops through the halls, predicating their judgement of Ford's sex and gender based on what are considered stereotypically male clothing items.

5. Self-Defining As Agender Is A Means Of Embracing One's Own Fluid Identity Without Feeling Forced Into Gender Conformity

Ford concludes their essay by describing an agender identity as one that doesn't kowtow to social expectations, from sporting stereotypically masculine or feminine garb to adopting the mannerisms often associated with each gender. "I am no longer trying to be anything — I just am. I don't care what women or men are "supposed" to do, be, or look like according to any societal standards or roles. I do, say, and wear what resonates with me. I am no longer limited in terms of gender, fashion, or other people's perceptions of me. Clothing has no gender, and neither do I," Ford states.