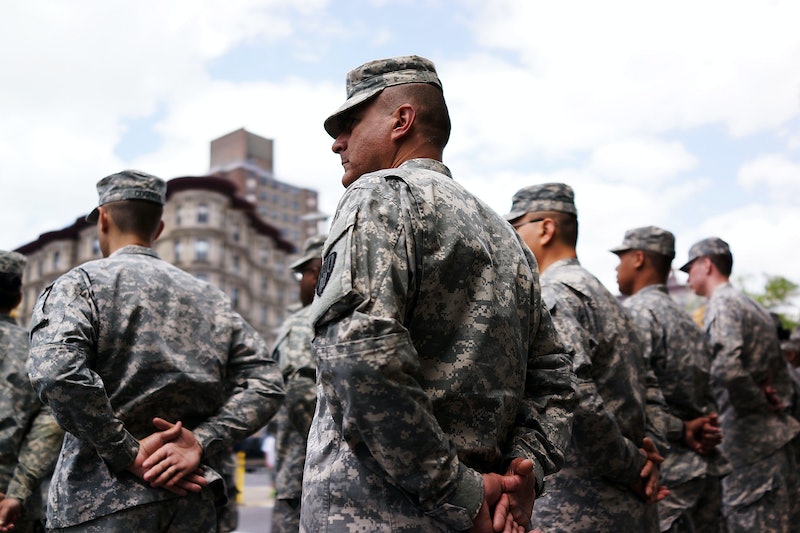 Remember when Olivier Rousteing's Balmain Army was the chicest army? Kimye better watch out, because on Wednesday, the new U.S. Military uniform got an upgrade. The update means some small tweaks, like redesigned shoulder sleeve pockets and two pen pockets on the sleeve instead of three — a sign of the tech-centric times, perhaps?

The biggest change, however, is a completely reworked camo print, Scorpion W2, which is also known as Operational Camouflage Pattern. It will be the safest, most effective one yet and is the result of what the Army calls "the most comprehensive uniform camouflage testing effort ever undertaken." The pattern previously used, called "Universal Camouflage Pattern", has been described "ineffective," which when it comes to the Military, is obviously a very serious issue.

The uniforms won't be mandatory until fall 2019, which makes the fashion industry's standard one-season-ahead MO look feel like cramming for finals.

Fashion has always been a pretty solid cultural and political signifier (one word: normcore) and it's no different in the US Army. The newly released uniforms, which, like all military uniforms must be Made in USA, are a noticeably lighter shade of browns and tans, much different than earlier versions in which rich green tones were prominent. U.S. Military presence is strong in desert regions like Afghanistan, Iraq, and other parts of the Middle East, where arid conditions are the norm.

The new U.S. pattern and reworked uniform, revealed on Wednesday, seems to perfectly match the dry, desert landscapes where the U.S. Military has an active presence. The T-shirt color is even appropriately named "Sand." Side note: Isn't it a bit odd that in the Army-issued photos of the new uniform, female soldiers are noticeably absent, even though women make up nearly 15 percent and counting of the military?

In a recent article about the new uniforms, The New York Times does a great job breaking down some of the various camos from the past few decades and aligning them with significant cultural and political events (like wars):

The Woodland camo (dark browns and forest greens), officially introduced in 1981 as part of the Battle Dress Uniform; the Tiger Stripe (interlocking strokes of green and black layered over olive and khaki), which was worn in Vietnam; the “Blueberry” (navy camo in various shades of blue); and the Chocolate Chip (light tan, with brown splotches and black and white “chips” dotted on top), as worn in the Persian Gulf war.

NYT also points out that the update will effect not just the country and national security, but the fashion community, as well. Laugh if you will, but fashion is a multi-billion dollar industry that people the world over interact with countless times a day, whether they want to or not. Fashion Director Vanessa Friedman, who wrote the piece, also cheekily points out that fashion itself is "uniforms abstracted and diversified for a multitude of armies, both corporate and communal."

It's not hard to see the parallels Friedman is talking about. I can personally remember my first camo "fashion" experiment — a see through, long-sleeved mesh top from Express that I wore, rather daringly if I may say so, with camo cargo pants from a flea market. (I repeated this outfit to dress as Scary Spice for Halloween.)

Indeed, camo has long been a favorite for fashion designers, who have sent models marching down the runway in head-to-toe looks or with small accent pieces, and the print factored into Valentino's Mens Spring 2016 runway, pictured below, in a big way at his Paris show in June.

While the change may have little to do with fashion and more to do with, I don't know, survival, Sgt. Maj. of the Army Daniel A. Dailey let a glint of humor show through while discussing the transition period between the old uniform and the new.

"Presenting a professional appearance is very important to Soldiers. But, we will not inconvenience or burden our troops. We will still be the most lethal fighting force the world has even known even if our belts don't match for the next few years."