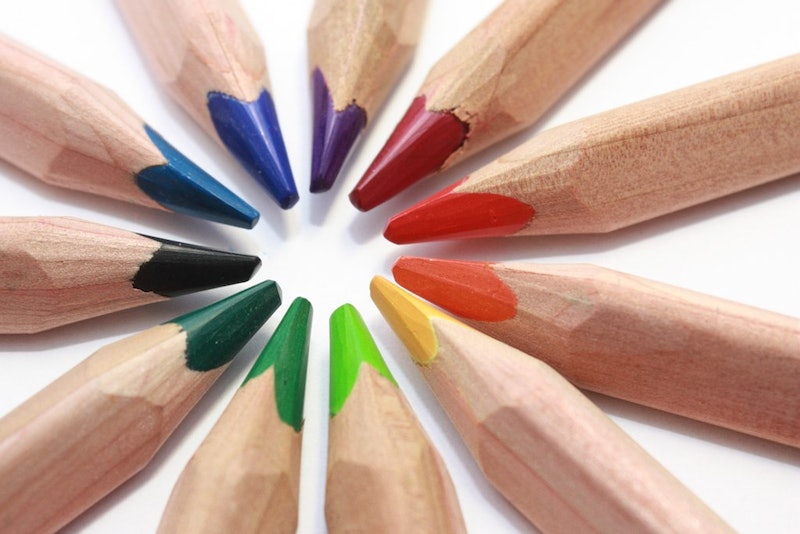 You know those people who love to go around talking about their quirks, whether they're real or imagined? Like, the kind of person who loves talking about her gluten intolerance or how she's synesthetic? I'm that kind of person: I maintain that I'm allergic to whole apples (not cut apples, mind you — I only get a bump on my lip when I eat whole apples), sneeze in direct sunlight, and have poor circulation. None of those has been diagnosed by doctors, but who knows me better than me? Anyway, when I found out there was a test that tells you how color sensitive you are, I understandably got excited. More quirks for me to waffle on about? Sign me up!

First things first: What exactly is color sensitivity, anyway? "Color sensitive" folk are more perceptive than their color insensitive corollaries in terms of color tint and shade. They're the kind of people who freak out over which shade of cerulean will look better on the walls. If you're the kind of person who's like, "Those are the same shades of blue, have you lost your damn mind?" then you might be sensible, but you're certainly not color sensitive.

According to Live Science, we can see colors because we have cells in our retinas called "cone cells" that react to incoming light. There are three kinds of cone cells: Ones that perceive red, ones that perceive green, and ones that perceive blue. All the other colors you see are a result of your brain improvising and combining the lights detected by the three main cone cells. Actually, two to three percent of women have a fourth kind of cone cell (this condition is called "tetrachromacy"), which is probably where the rumor that women are more color sensitive than men comes from. Well, that and the fact that eight percent of men, while only .4 percent of women are afflicted with color blindness. Color blindness is the result of a cone cell deficiency in either number or function.

Now, this test, which comes to us from the site iGame, doesn't tell you anything about color blindness. Rather, it tests your ability to differentiate between colors. Here's how it went for me (spoiler alert: I'm a special snowflake and highly color sensitive):

1. These Are The Instructions:

Seems simple enough. It's like one long game of "one of these things is not like the other."

2. And Here's the Grading Scale:

When I started the test I had no idea what this was going to mean, but I was excited and terrified. What if I scored in the zero to four range? What if I'm as color sensitive as a bat??

And so it began.

4. The Tests Got Harder:

I ended up getting a high score of 20. The reason the doctor is saying "your best score is 20!" in the mouth bubble of the above picture is because I had to go back and take the test again so I could grab a picture of a later level. I got too caught up in it the first time to screenshot once it got hard, because you only have 15 seconds per round and you lose three seconds every time you answer incorrectly.

Basically I got way too emotionally invested in this test.

My color vision is superb. Never felt more validated in my life. Head over to iGame to take it — but if you think you're having some vision problems, you should probably see an actual optometrist. The Internet, after all, can only tell you so much.