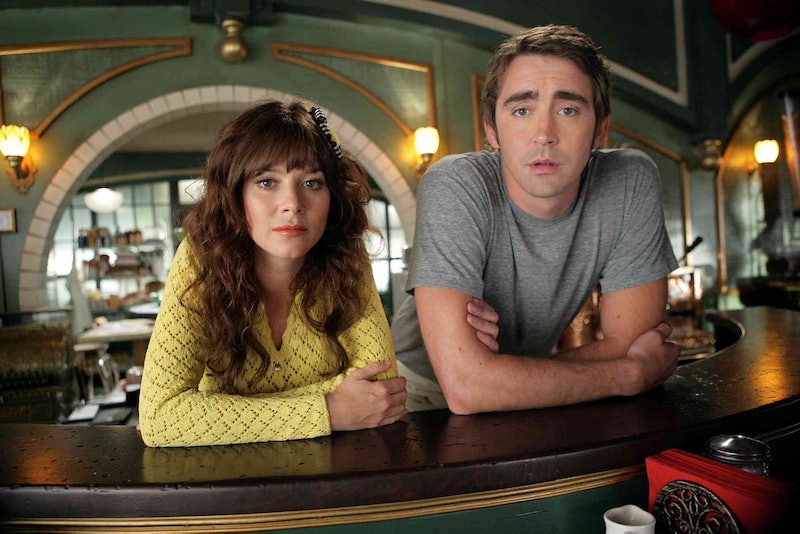 Although Pushing Daisies was unceremoniously canceled over six years ago, I have to admit: I still mourn its wonderful presence. The series, which was created by Hannibal creator Bryan Fuller, delivered a colorful world revolving around unique characters, unrequited love, the balance between life and death, and, best of all, pie. It had everything! Even more importantly, the show presented well-written relationships between characters — even now, I can't get over the storyline between principal characters Ned and Chuck. As the main OTP of the Pushing Daisies universe, the two were the heart of the show — and thanks to the circumstances of their relationship, were undoubtedly one of the ultimate #relationshipgoal couples that television has ever seen.

The duo had one of the most unique relationships of the entire series (which is actually saying a lot). Though they were so in love with one another, the two couldn't actually touch each other at all — since they only got together after Ned brought Chuck back from the dead with his ability to revive the deceased, another touch would render Chuck very, very dead again. While this obstacle would likely topple weaker couples, it ended up only making Ned and Chuck's bond stronger — in the place of much physical affection, the duo built their emotional connection to rock-solid levels and successfully redefined "happily ever after" on their own terms. This is always something worth aspiring to.

1. Ned Had A Crush On Chuck All The Way Back When They Were Kids

Love stories that start out like this always warm my heart, what can I say?

2. Ned Brought Chuck Back From The Dead

Though Ned routinely revives recently deceased people for minutes at a time in an effort to assist Emerson with detective work, he always touches them again so they'll return to their deceased state — if he doesn't, another will die in their place, and Ned isn't about dat murderer lifestyle. However, when it came to Chuck, Ned broke this rule. I know it sounds slightly messed up when I put it like that — I mean, yes, Ned basically let someone else die to ensure Chuck had a second chance at life — but I think, above everything, it just signifies how much Ned really loved Chuck. He was willing to kill for her without even thinking twice.

3. They Always Supported One Another

When Chuck returned from the dead, she began to help Ned out in many facets of his life: At the pie shop, and as he dabbled in detective work with Emerson. Similarly, Ned helped Chuck out whenever she needed him (and especially when she found out that everything she thought she knew about her family was a lie). Another mark of a good couple: They're always there for each other, for better or worse.

4. They Overcame Their Struggles In A Mature Fashion

Ned and Chuck's situation was a particularly unique one in terms of forbidden romances on television. See, Ned did possess the ability to bring formerly living things back from the dead, but it came with unfortunate side effects. When Ned revived Chuck after she was murdered on a cruise ship, the two couldn't touch at all — but they still managed to work past the obstacle by talking and supporting one another. Now that's maturity.

Listen. It's an important part of any relationship to share mutual interests, and a love of pie is a great one to share. It's indicative of good character, actually!

Honestly, if I were in either Ned or Chuck's shoes, I would have never thought to rip off a piece of saran wrap so I could kiss my significant other. Goals!

7. They Couldn't Touch, But They Made The Best Of Their Situation

Of course, a significant obstacle in Ned and Chuck's relationship was the fact that they couldn't actually touch skin-to-skin — which, when you're in love, is obviously a downer because it rules out any and all physical affection, even hand-holding. However, Chuck and Ned didn't feel sorry for themselves, mope, or even break up like couples on other, more dramatic shows might: Instead, they made the best of their situation, and came up with pretty nifty methods to show each other at least some physical affection. From wearing beekeeping suits so they could dance with each other on Ned's rooftop to kissing with a saran wrap acting as a barrier between them, Ned and Chuck redefined romance their way — and they were happy just to be in each other's presence.

TOO MUCH CUTE. SOMEONE HOLD ME. WHY DID THIS SHOW EVER END?!