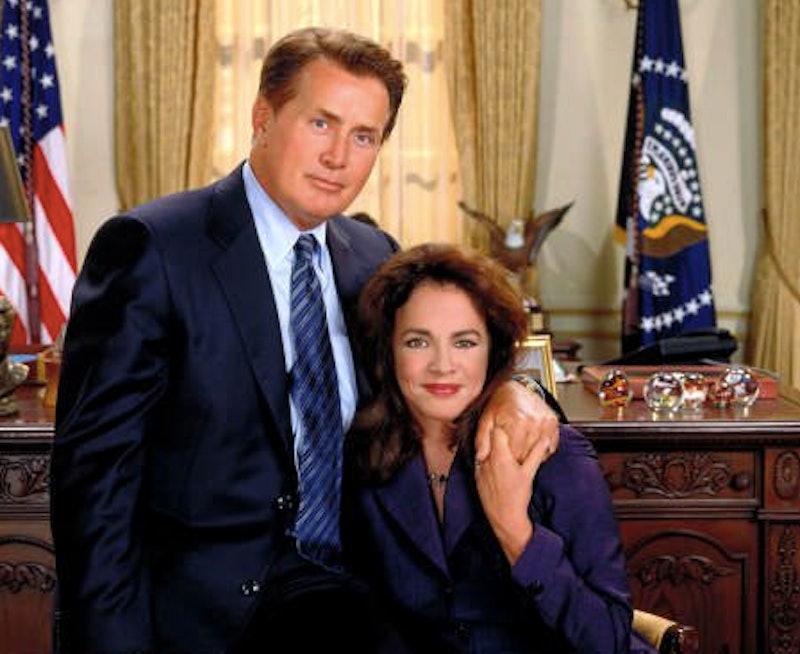 Do you happen to have four hours free to talk with me about how amazingly mind-blowing The West Wing is? Oh you do? Well, how about four weeks, then, because that's probably closer to the amount of time I'd need to get out all my feelings about this show. I love pretty much every part of it — minus the thing that happened in Season 2, Episode 21, for which I will never forgive anyone involved — but one of my favorite aspects is the relationship between President Josiah "Jed" Bartlet and his wife, Dr. Abigail "Abbey" Bartlet. Not only is it one of the most respectful, supportive unions that I've ever seen on (or off!) television, it's also one of the most realistic, with the character of the First Lady fully fleshed-out and formed.

Even though Stockard Channing, who played Abbey, wasn't in every episode, creator Aaron Sorkin never let that be a reason for her not to be a character with depth. She has likes, dislikes, thoughts, feelings, hopes, dreams, frustrations, all of it! The series is about the President of the United States and his staff, but, in the process of writing that world, Sorkin and his team created one of the most honest, believable wives on television, who's just as compelling as anyone else on the show.

Here are nine reasons why.

Yo, Abbey Bartlet is a full-on medical doctor with a practice and everything, not just a politician's wife who stands in the background and smiles.

And did I mention she both attended and taught at Harvard, and is a world-class physician, specializing in internal medicine and thoracic surgery? Girl is no joke.

3. She Challenges Her Husband

Even though Jed is the President, that doesn't mean he doesn't say things that rankle Abbey, and she's never shy about letting him know. I love that about her, because it shows that she's a true partner, not just a prop.

Remember when Jed announced he was running for another term, when he and Abbey had explicitly agreed that he would step down after just one? She was so pissed (and rightfully so) that all we saw of her for a few months on the show was an icy presence moving through the residence, packing for whatever her next trip was. She saw enough of the big picture to know that the country was more important than her marriage, so she didn't make it into a larger issue, but that didn't mean she was okay with her husband breaking a promise to her. She was in a complicated, impossible position, and she handled it like the pro / ice queen she is. Respect.

5. She Cares About Things That Are Important

A lot of wives on TV shows just nag at their husbands from the kitchen while they get a laugh just by rolling their eyes, but the things Abbey chooses to get angry about matter, and she won't shut up about them until they get the attention they deserve. It's the kind of behavior we typically value in men on TV, but rarely in women, so golf claps to The West Wing for daring to be different and pulling it off.

Hey, is it the best idea ever to hide your husband's debilitating disease from an entire nation while surreptitiously giving him shots to conceal his condition? No, absolutely not. But she thought it through, made a calculated decision, and did what she did for love. Nobody's perfect all the time, or simple, or predictable, especially when they're a well-written character.

7. She Knows What To Do With Her Down Time

As much as I love the relationship between the Bartlets, I also love watching Abbey when she isn't around Jed, specifically the friendship that blooms between Abbey and Claudia Jean "C.J" Cregg, played by Allison Janney. Instead of sitting around waiting for him to have a free second, one or the other of them grabs a bottle of something and they head off together to dish some serious (intelligent, worldly, informed, empathetic) dirt. Friendship goals!

8. She Values Sex With Her Husband

BECAUSE SHE IS A HUMAN PERSON WITH DESIRES. I know there's some unwritten law that only twenty-somethings get to want to have sex with each other on TV, but Abbey Bartlet doesn't subscribe to your rules or care if you think she's sexy in middle age. She has a husband, and she wants to bone him from time to time.

9. The Two Of Them Still Love Each Other

You know that thing on shows where the husband and wife snipe at each other so much that you're like, "OK so why are you together??" You never feel that watching The West Wing. These are partners who compromise and support each other, and you can't imagine one without the other, no matter how rocky things get. I always appreciated that divorce or infidelity was never a storyline that they even got close to touching, because it would've felt so false and unearned given the characters they'd created.

Bottom line, this woman is amazing and complicated and should be the standard we aim for when writing new characters for television or movies, or just being people in the world. She's a wife, a doctor, a mother, an ambassador, a philanthropist, and a friend, among many other things, and it seems never to have even occurred to her that it could have gone any other way.