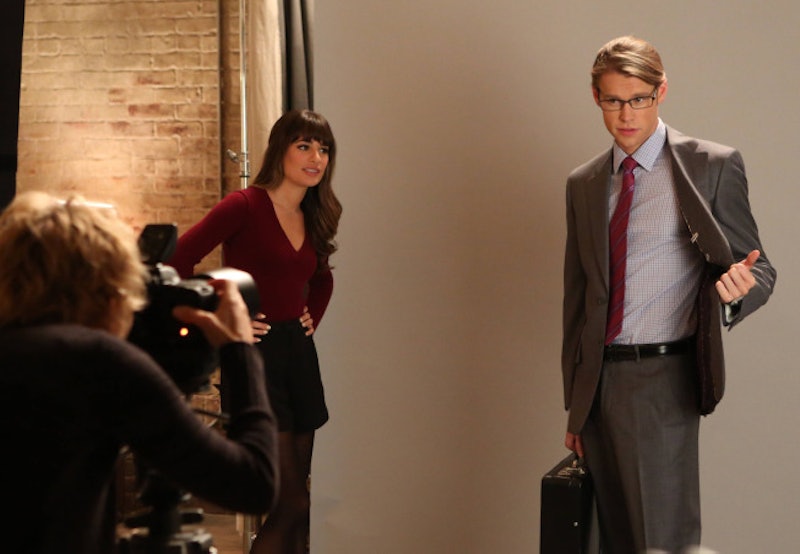 We knew this day would come, but we didn't think it'd arrive so soon — Ryan Murphy is playing with a new love interest for Rachel and we're not happy about it. Tonight's Billy Joel-themed episode of Glee, titled "Movin' Out," sent Blaine and Sam out to New York on college visits/soul-searching expeditions. It was fun before it got weird. It's only been two episodes since "The Quarterback" and one week since Rachel got her memorial "Finn" tattoo, so it's safe to say that neither we nor Rachel are ready to entertain any kind of new romance. You should know better, Ryan Murphy, honestly.

Also, I'd never put Rachel together with Sam. Rachel's so neurotic and hellbent on world domination that she'd just trample right over Sam and leave him to die on her way to the top. That's not saying anything bad about her, though. She's just ambitious, and there's no room in her world for eternal optimists with pipe dreams. Sam's a great guy, but if Rachel has to move on, I don't think it should or could be with him.

That being said, I know we have to let Rachel move on someday, but I don't think that day is today. Or, frankly, even this season. On Thursday's episode, Sam and Blaine come to New York, basically seeking advice from the "older and wiser" ex-glee clubbers. Blaine is a little scared of his greatness and his NYADA audition and needs a pep-talk from perfect fiancé Kurt to assure him that he doesn't need a back-up plan. Sam, on the other hand, completely bombs his interview at Hunter College (with a few seriously misinformed comments on feminism and women's issues) and decides that his official course of action will be to become a professional male model. Mostly because he wants to see his "junk as big as a car" on the side of a bus. Okay, maybe he has a little ambition.

Naturally, Rachel, who's still looking for some semblance of meaning outside of her professional life, agrees to set him up with a photographer acquaintance from Funny Girl. Sam poses for some photos. But then, in the middle of the shoot, we witness the first moment of completely awkward sexual tension: Rachel and Sam lock eyes while she smears baby oil on his chest. Are you uncomfortable yet? I was and still am. After that brief moment, Sam gets set up with a meeting at "Bitchette" (no, I'm not kidding) with Tyra Banks (still not kidding), who tells him to lose 10 pounds or else he'll fail. Because he's Sam, he considers actually doing this.

Back at the Berry-Hummel-Lopez apartment, Sam's refusing carbs/all food in general for a diet of "Mentos and flavored air" when a sing-a-long to "Just The Way You Are" on the new piano Blaine bought starts. Thankfully, the wise words of Billy Joel convince Sam that he doesn't have to lose 10 pounds and in a very Rachel-esque move (remember how she felt about her nose?), he decides that he's either going to be successful as is or find something else to do. Cue awkward sexual moment No. 2: Mid-song, Sam and Rachel team up and start dancing and staring into each other's eyes. This time around, everyone notices. (If you missed Rachel, Kurt, and Blaine's eyebrow raises, you might actually be blind.) My brain was literally punching the inside of my skull and screaming, "Why, why, why?"

After all, Rachel's not fully recovered from losing Finn. How could she be? We're still not over it and he was her first love. I'm disappointed in Ryan Murphy — who claimed that Rachel and Finn were pivotal to the entire concept of Glee — for haphazardly throwing this plot twist in our faces. It's not fair, and, to be quite honest, it hurts. Rachel moving on shouldn't feel forced. She needs to move on with someone new, not someone from McKinley that we never pictured her with in the first place. Though we won't be able to resist comparing any and every guy she dates to Finn Hudson, Murphy should have at least avoided choosing one of Finn's friends for Rachel's next suitor. It just feels heartless.

More like this
Scott Disick’s First Time Around Kravis Was “Awkward,” To Say The Least
By Jake Viswanath
The 'This Is Us' Finale Featured An Adorable Season 1 Jack & Rebecca Easter Egg
By Grace Wehniainen
'Obi-Wan Kenobi' Takes Place After This Key Star Wars Movie
By Arya Roshanian
Jack's Facial Hair Moments On 'This Is Us,' Ranked
By Grace Wehniainen
Get Even More From Bustle — Sign Up For The Newsletter