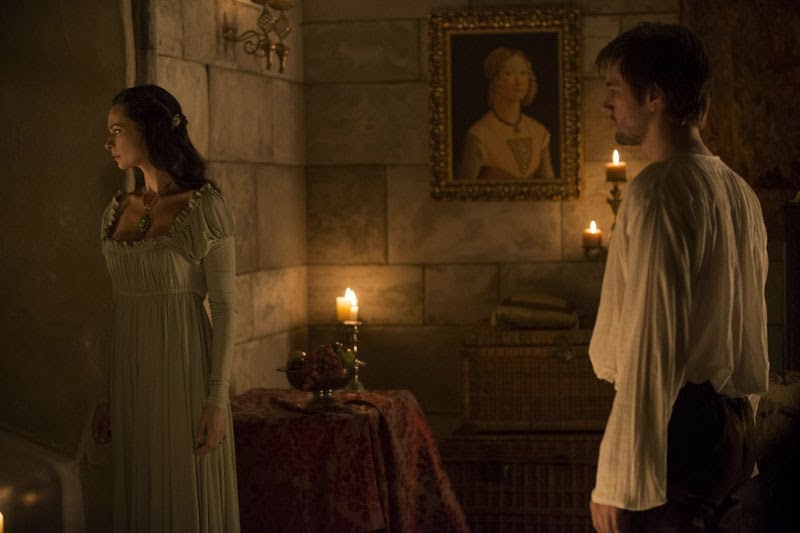 Okay, Reign: I really need you to calm down. You are my guiltiest of pleasure (just kidding, I don't feel bad about loving you at all), but you're getting a little too heavy lately. Take this week's episode, "Chosen," for example. My favorite 16th century hotties had to deal with pagan rituals and human sacrifices. There was almost no time to think about pretty dresses and pop music and dances at balls. Last week, everyone was hooking up with everyone, and it was just like watching The Other Boleyn Gossip Girl. It was amazing. Let's get more scandalous hookups, less human sacrifice, please. More elaborate headbands, less bloodletting.

The real point of this week's episode was less about gruesome things like Mary waking up to a stag's head above her bed and more about establishing the problematic love triangle that will likely sustain throughout the series. The problem with something like Reign is that we already know how this story ends, assuming they honor history (of course, if they honor history, Francis' days are numbered, since it's already 1557 in the series and, in real life, Mary and Francis were married in 1558 and he was dead by 1560. Sorry, Team Francis). Luckily for anyone addicted to Reign's drama, historical accuracy is not proving to be a top priority for its creative team. But back to the point: This week is about establishing the strength of Bash and Mary's bond and just how much Francis hates that bond.

When the pagans decide that Bash has interrupted their rituals and owes them a new sacrifice, he's not keen on picking someone to kill. Since he refuses to pick a sacrifice of his own, they choose for him, picking someone they know will drive him to make the sacrifice himself. They mark Mary, giving her a necklace with their symbol and then later a Godfather-esque stag's head above her bed. It's totally gross, but it works and Bash resolves to become a killer to save Mary. He ends up performing a sacrifice of one of the pagans, but kills a thief he originally intended to kill anyway, after the mouthy man admits that he knows who Bash is. Back at the palace, Queen Catherine and Mary get to the bottom of which castle servants were involved in the plot to terrorize and possibly kill Mary with practically zero help from anyone involved in security at the palace. When these ladies team up, things get done.

Francis, who saw their kiss last week and is in full-on temper tantrum mode, spends most of the week vaguely alluding to their tryst without coming out and saying he knows. When he finally does, he admits that he fantasized about Bash dying during his attempt at a sacrifice (because that's fair punishment for a kiss that was only French because it happened in France). Then he announces that, while he'll marry Mary if it's right for his country, he thinks they should see other people in the meantime. What he means by this is he gets to bang Olivia and Mary gets to smile coyly at whomever she pleases – except Bash. Francis, as the future king, is definitely in a position to make threats and he doesn't hesitate to do just that.

So to recap, here's where we stand with the love triangle: Mary is in love with Francis. She wants to get married right away, but he's waiting for the right time, politically. Francis is in love with Mary, but he doesn't want to be because it clouds his judgement as a ruler. Also, he's a tempestuous man child and still has some wild oats left to sow. Bash is in love with Mary, but he's not allowed to be, since he's a bastard and she's a queen. Mary is attracted to Bash, but won't allow herself to love him (yet) because she's so hung up on Plan A, Francis, and what's best for her country. Now that Francis has announced that he and Mary should stop hanging out so much, however, Bash will have the opportunity to disregard his baby brother's wishes and woo Mary completely.

The only other plot worth mention this week involved Kenna and the king. Kenna is proving herself to be a demanding, insecure brat. She spends most of the episode insisting that the king do things like get rid of his previous mistress and then get rid of the tiles she picked out. She has every right to be insecure, of course, since he is still sleeping with his former mistress/love of his life/Bash's mom, even if he's officially traded her in for a newer model. He wants Kenna to be more like her, able to fix his problems without asking for help, and he sees Kenna as creating problems for him, rather than fixing them. I can't decide how I feel about Kenna. Her relationship with the king is bringing out the worst in her, but I still find myself kind of rooting for all of the girls in Mary's clique.

What did you think this week's episode?