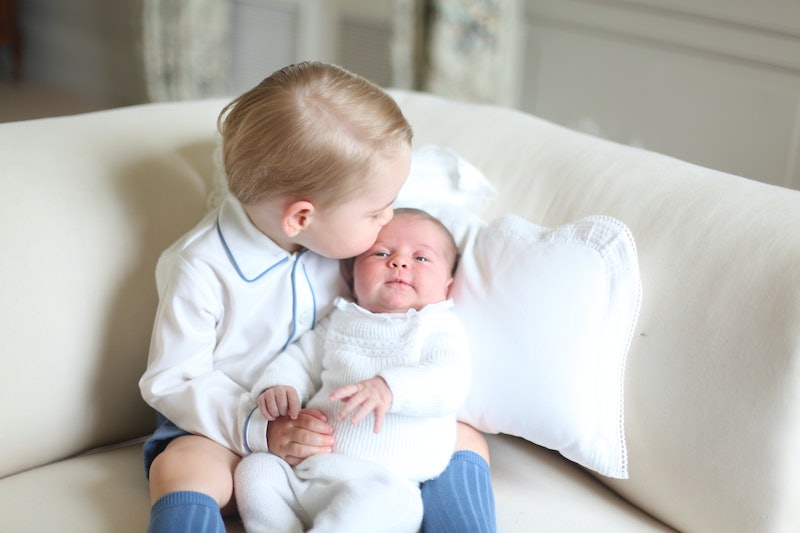 The time for another exciting royal family function is upon us: Princess Charlotte's christening. Like Prince George's baptism, the world is pretty much going crazy for Prince William and Kate Middleton's youngest child, this time, because she is officially being baptized at Sandringham, England’s Church of St. Mary Magdalene. You know what means? It's also time to reveal her godparents, all five of them.

As with Prince George, Prince William,and Princess Kate have selected several godparents for their youngest one, something which seems to be common in the royal family, but more on that in a bit. On Sunday, it was announced that Sophie Carter, James Meade, Adam Middleton, Laura Fellowes, and Thomas van Straubenzee will serve as Charlotte's godparents.

According to the Daily Mail, it was rumored that Middleton's sister Pippa Middleton, friend Rose van Cutsem, and William's cousin Peter Phillips, were the favorites to become Princess Charlotte's godparents. Princesses Beatrice and Eugenie were also said to be in the godparent mix — again. Yet as it turned out, none of the chosen godparents are royal, with William and Kate choosing instead to pick other members of their family and friends. Carter is a friend of Kate's, and Middleton is the Princess' cousin; Meade and van Straubenzee both know William from school; and Fellowes is William's cousin, the niece of the late Princess Diana. According to The Daily Mail, several of those picked, like William's schoolmates, were widely predicted to be on the list, while others, like Carter, should come as a surprise to even the most royal-obsessed.

Five may seem like a large number of godparents, but when it comes to William and Kate's children, guidance is key to ensuring they live the fullest and greatest life possible. The same was said for George, who has seven godparents. That's right, seven. For the Duke and Duchess of Cambridge, the godparents selected for their first-born son was important, especially since they "wanted to include family and friends and reflect their life on both sides," a royal source told People after Prince George's christening.

With that said, why so many? Why do George and Charlotte have so many godparents, 12 in total? Even though most of us are used to having one godfather and one godmother, apparently, when you're royalty, you need several more. As royal expert Victoria Aribter told HELLO! in April 2015, "It's an important role. A godparent is there to provide religious guidance. It's also somebody who is there other than a parent or family member that a child could turn to." Well, that seems pretty normal for every family who chooses godparents for their children, right? Again, why so many?

Well, there doesn't seem to be an exact reason, other than that it appears to be tradition for those considered royalty to have more than two godparents. For example, both Prince William and Prince Harry have six godparents. Also, according to Robert Jobson, royal editor of the U.K.'s The Evening Standard, who spoke with ABC News in April 2015, "There's a feeling that because of their role as members of the royal family that they need as many confidants as they can get apart from their parents."

Basically, William and Kate want as much love and guidance surrounding their children as possible. What lucky kids.