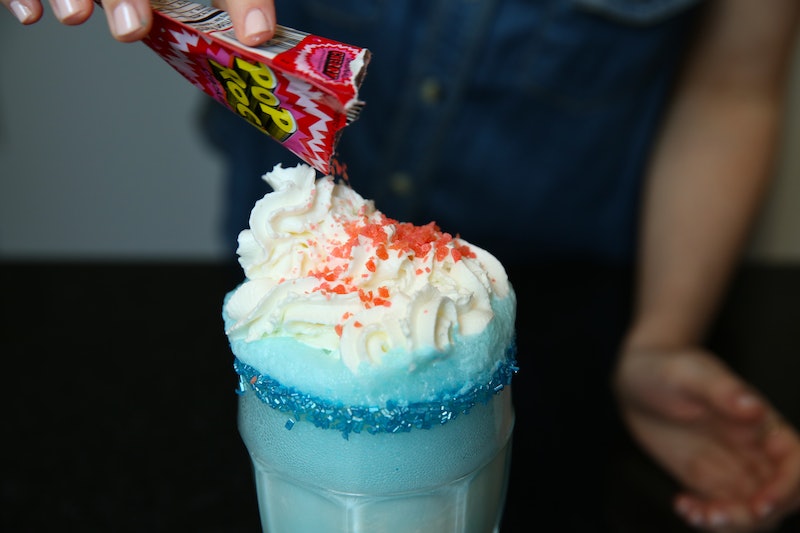 Apparently it's already July (um, what?), and that means that the biggest, most festive barbecue day of the year is upon us. The solstice has passed and it's officially summer. Yes, really, it's pretty much time to start making your Christmas list. But let's turn briefly from the fact that time is passing before us at an alarming rate and focus instead on the fact that summer is the best time of the year — and the Fourth of July is sunny fun at its best. While we might not all be into rocking red, white, and blue outfits, this is the prime time for our festive foods to show some patriotic spirit. Although you could go full classic with some berries and whipped cream (yawn), we're choosing instead to go all-out with some electric hues — with the most American, firework-y Pop Rock soda float of all time.

Nothing says old school Americana like some rich, creamy ice cream topped with soda and a straw. Nothing says current Americana like unnatural colors and questionable things that taste sweet but likely aren't made from actual sugar. Put those pillars of patriotism together and you've got yourself something truly July 4th-worthy. And it actually tastes great ... especially if you add a shot of vodka in your blue soda.

So put on your American flag bikini (what, you don't have one?) and build a few of these guys for the big day. In a few super simple steps, you'll be on your way to legendary Queen of the Fourth status.

Squeeze one to two tablespoons of syrup on a small plate. Place your glass face down and swirl gently to coat the rim.

Spread a layer of sprinkles on a small plate. Spin the rim of your glass to coat.

2. Scoop Ice Cream Into Your Glass

5. Add A Sprinkle Of Pop Rocks

Check out our video below!