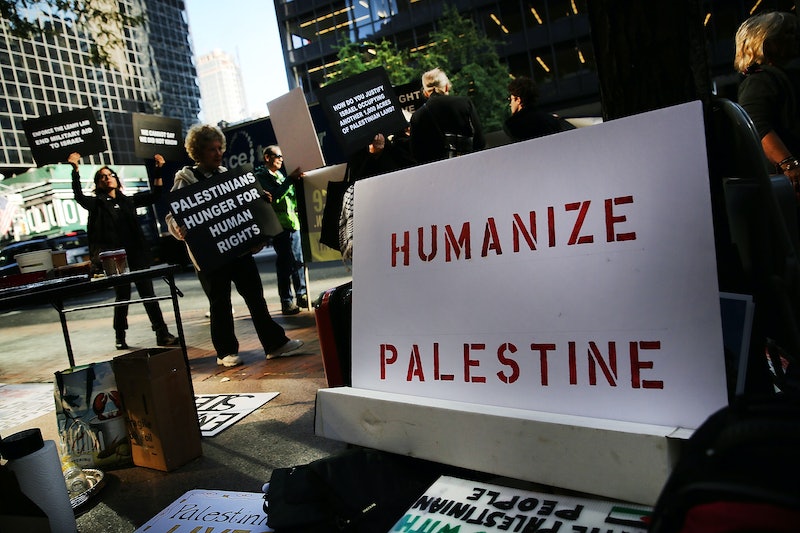 More than 130 countries officially recognize Palestine as a state, but the United States is not one of them. However, American ties with Israel have weakened during President Obama's administration, and with Palestinians calling for an end to Israeli occupation by next November, many are wondering where the 2016 presidential candidates stand on the Israel-Palestine conflict since it could become a key issue in the upcoming elections. Simultaneously, the Boycott, Divestment and Sanctions movement, which aims to bring Israel to task for the occupation of Palestinian territories, has achieved a lot of prominence in the past year, with many colleges and universities launching their own divestment campaigns and artists from around the world refusing to perform in the region.

The Israel-Palestine conflict has always been a particular point of contention in American politics. Democratic candidate Bernie Sanders told unruly constituents to "shut up" while answering a question about Israel and Hamas at a Vermont town hall meeting last August. GOP candidate Carly Fiorina promised to make Israel her first phone call as president. This situation only declined when House Speaker John Boehner invited Israeli Prime Minister Benjamin Netanyahu to speak at a joint session of Congress without consulting the White House or the State Department. Because this is such a pertinent issue, here is a look at what some of the primary contenders for the 2016 presidency have to say about the conflict:

Back in March, Clinton reaffirmed her support for a two-state solution to the conflict, and in the aftermath of Netanyahu's February speech to Congress, she said she wanted the "special relationship" between the United States and Israel to return to a "constructive footing." Clinton also said at this time that she did not want Israel to be a partisan issue.

As recently as 2014, Clinton said that she believed Netanyahu wanted to eventually create a free Palestinian state alongside Israel — something that Obama has rejected on multiple occasions.

Sanders is Jewish, and he lived on a kibbutz in Israel after graduating from the University of Chicago. At the Vermont town hall meeting — a video of which went viral — Sanders told "hecklers" to "shut up" when they challenged him on Israel's Operation Protective Edge in Gaza, a military operation last summer that killed more than 2,000 people, the majority of whom were Palestinian non-combatants. At this time, Sanders said that he thought Israel had "overreacted" by bombing U.N. facilities, but he also commented on the Hamas-fired rockets that Israel had to deal with — a comment that did not go over lightly.

This might prove to be a particular challenge for Sanders. He is not uncritical of Israel, but the far-left circles to which he largely appeals are much more vocally in favor of the Palestinian people than he currently is.

Bush has been particularly vocal in his support of Israel and Netanyahu, writing an editorial for the National Review in March that heavily criticized the Obama administration's treatment of Israel. He accused the administration of insisting "that Israel make concessions just to get the Palestinian leaders to the negotiating table," describing these actions as "schoolyard antics." He believes that Obama is not treating Israel appropriately as an ally, and he distanced himself from his informal foreign policy adviser and former Secretary of State James Baker's comments expressing frustration with Netanyahu's unwillingness to move toward peace.

Following Netanyahu's pre-election declaration that there would be no Palestinian state as long as he was Israel's prime minister, Cruz said that "the United States should stand unshakably with the nation of Israel." Cruz went on to say that "Israel is a sovereign nation" whose foreign policy cannot be dictated by the United States. But Cruz ultimately made it clear that he would always defer to the Israeli government. In saying that he trusted the leaders of Israel to choose between a one-state or two-state solution, Cruz deviated from at least 15 years' worth of American foreign policy that explicitly called for the creation of an independent Palestinian state.

Back in March, when O'Malley said the United States should continue to push for a two-state solution to the Israel-Palestine conflict, he also urged American and Israeli officials to stay out of each others' political campaigns in order to avoid further tension between the two countries. Similar to Clinton, O'Malley called for a return to "constructive dialogue" between all parties. Despite criticizing recent rhetoric, however, O'Malley appears committed to the relationship between the U.S. and Israel as allies.

I think the relationship between the United States and Israel is strong, will remain strong, and must be strong for our own security. But also, we have to continue to wage peace, and in this context, waging peace means pushing for a two-state solution.

As always, Trump has no qualms about criticizing anyone and everyone, and this was apparent in his statements about Israel when he announced that he was running for president. Among other things, Trump criticized the Obama administration's nuclear talks with Iran, saying if Obama made deals with Iran, then "Israel maybe won't exist very long."

He also brought Secretary of State John Kerry into the mix, though it's unclear where that particular point was going.

We have to protect Israel. And we won't be using a man like Secretary Kerry that has absolutely no concept of negotiation, who's making a horrible and laughable deal, who's just being tapped along as they make weapons right now, and then goes into a bicycle race at 72 years old, and falls and breaks his leg. I won't be doing that. And I promise I will never be in a bicycle race.

We are unlikely to see a lot of criticism thrown Israel's way in 2016, but if Netanyahu continues to show up to Congress without telling the president, or continues to demonstrate opposition to the creation of an independent Palestinian state, it's possible that he could stir up more than a little trouble for the relationship between the United States and Israel.

More like this
Boris Johnson’s Leadership Is In Question – Again
By Bustle UK
5 Ways To Stand In Solidarity With Women In America From The UK
By Sophie McEvoy
How To Fight For Reproductive Rights, Based On How Much Time You Have
By Courtney Young
The Families Of Grenfell Tower Are Still Waiting For Justice, Five Years On
By Bustle UK
Get Even More From Bustle — Sign Up For The Newsletter