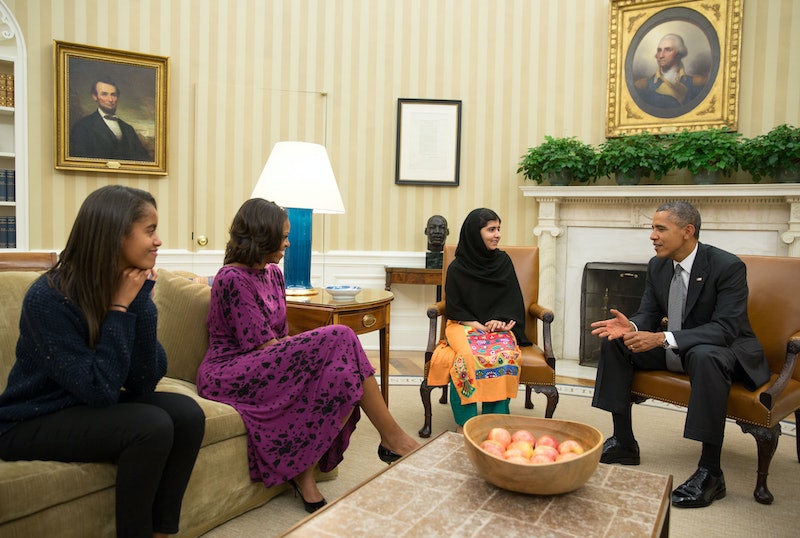 Once upon a time, photographers followed the president everywhere he went, snatching revealing and original photos. But Obama's White House administration has slowly been putting an end to that. Photojournalists have been barred from several high-profile events in the recent past: a reception for Malala Yousafzai, a meeting with Israeli-Palestinian negotiators, and a presidential lunch with Hillary Clinton. Instead, the administration provided official photos for press use. Because God forbid the horrible press get a funny photo of the president with Malala! Now, photojournalists are fighting back. Well, sort of. They submitted an official letter in protest to White House Press Secretary Jay Carney Thursday.

"You are, in effect, replacing independent photojournalism with visual press releases," the photographers' letter said. "The right of journalists to gather the news is most critical when covering government officials acting in their official capacities." To which the White House said, of course, that those incidents were exceptions, and that the White House is committed to independent journalism. It's hard to imagine a different administration getting away with this.

This isn't the first time journalists have taken issue with the Obama administration. Earlier, we covered a new report that looked at how the administration cracks down on journalists' ability to do their jobs:

Under the Obama administration, those who might leak to journalists are subjected to “lie-detector tests and scrutiny of their telephone and e-mail records.” Among the new disincentives for talking to journalists, Downie wrote, is a new “Insider Threat Program,” in which federal employees are expected to monitor their colleagues and report suspicious behavior, in a manner very reminiscent of McCarthy-era witch hunts. “There’s a gray zone between classified and unclassified information, and most sources were in that gray zone,” said New York Times reporter Scott Shane, who writes about National Security. “Sources are now afraid to enter that gray zone. It’s having a deterrent effect. If we consider aggressive press coverage of government activities being at the core of American democracy, this tips the balance heavily in favor of the government.”

It's a pattern, and it's time to worry.

If you look at the photo above (of the Obamas' meeting with teenage education activist Malala Yousafzai), you'll see that it's perfectly choreographed. Michelle and Malia Obama smile adoringly at Yousafzai as the president is mid-sentence, and the guest of honor appears to be paying obedient attention. But in reality, it was far from a hitch-free meeting — catching Obama's expression when Yousafzai tore him a new one for drone usage would probably have been more telling than this beautifully orchestrated shot.

So what to do? It's hard for the media to totally turn on President Obama, what with his intellectual sensibilities and adorable family. But maybe it's time to stop running staged White House photos. Maybe it's time to start including a line at the bottom of stories: The White House did not permit a [[publication name/or wire service]] photographer to attend this event. The carefully orchestrated photos are basically press releases, and there's no reason to give free, unfiltered advertising to the people we're supposed to be holding accountable.