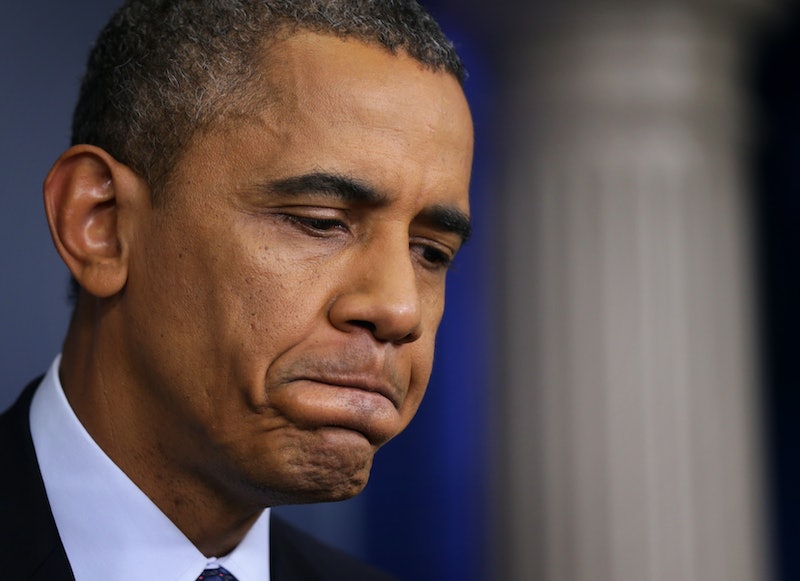 President Barack Obama’s campaign-era precision messaging has carried over from the campaign trail and created the most secretive presidential administration in recent memory, according to a scathing report by the Committee to Protect Journalists released Thursday. The report, authored by Leonard Downie Jr. with reporting by Sara Rafsky, relies on interviews with dozens of Washington journalists as to paint a picture of an administration unwilling to be subjected to journalistic oversight.

Under the Obama administration, those who might leak to journalists are subjected to “lie-detector tests and scrutiny of their telephone and e-mail records.” Among the new disincentives for talking to journalists, Downie wrote, is a new “Insider Threat Program,” in which federal employees are expected to monitor their colleagues and report suspicious behavior, in a manner very reminiscent of McCarthy-era witch hunts.

“There’s a gray zone between classified and unclassified information, and most sources were in that gray zone,” said New York Times reporter Scott Shane, who writes about National Security. “Sources are now afraid to enter that gray zone. It’s having a deterrent effect. If we consider aggressive press coverage of government activities being at the core of American democracy, this tips the balance heavily in favor of the government.”

The Times’ chief Washington correspondent, David Sanger, added that the Obama administration “is the most closed, control freak administration I’ve ever covered.”

Of course, a lot of this shouldn’t be surprising. The Obama administration has charged more people under the Espionage Act than all the other presidencies combined, despite the fact that the president ran on rhetoric of reform and flaunted his background as a constitutional lawyer.

But despite New York Times public editor Margaret Sullivan’s remarks that the current administration's attitude is one of “unprecedented secrecy and unprecedented attacks on a free press,” White House press secretary Jay Carney, a former journalist himself, said the attacks were overblown, adding that news outlets still managed to anonymously source information about a potential U.S. military strike against Syrian President Bashar al-Assad. (Those articles, however, were ultimately contributing factors to getting Russia to sign on to a diplomatic solution to Assad’s ownership of chemical weapons, and weren’t damaging but rather beneficial to the Obama administration long-term.)

The barriers to journalists are more insidious, insiders maintain, than merely not disclosing information about potential military operations. “The Obama administration will spend an hour with you, off the record, arguing about the premise of a story,” said Politico’s Josh Gerstein. “If the story is basically one that they don’t want to come out, they won’t even give you the basic facts.” Quartz’s Josh Meyer said the administration feels “entitled to and expects supportive media coverage.”

Downie, the author of the study, has a particular interest in transparency. He is a former Washington Post executive editor, and was a member of the team investigating the Watergate scandal. “The administration’s war on leaks and other efforts to control information are the most aggressive I’ve seen since the Nixon administration,” he wrote.

The Obama administration has an advantage that Nixon’s didn’t, though: direct access to voters and constituents through social media and other online venues. The administration even produces its own weekly news segment, with “events the press didn’t even know about,” said Ann Compton of ABC news. Frank Sesno, formerly of CNN, said, “Open dialogue with the public without filters is good, but if used for propaganda and to avoid contact with journalists, it is a slippery slope.”

In one of the most alarming manifestations of its crackdown on media, the Obama administration secretly subpoenaed Fox News correspondent James Rosen’s communication records, and ultimately conducted an open-ended monitoring of his communications. (His informant was tried under the Espionage Act.)

“The chilling is even worse in this case [than in the AP monitoring] because Mr. Rosen’s personal communications were subject to search for what appears to be an extended period of time. With the Fox News search following the AP subpoenas, we now have evidence of a pattern of anti-media behavior,” a Wall Street Journal editorial read. “The suspicion has to be that maybe these ‘leak’ investigations are less about deterring leakers and more about intimidating the press.”

The report points to the terrorist attacks of Sep. 11, 2001 as a turning point in government-media relations, and spotlights the treatment of whistleblowers like Chelsea Manning and Edward Snowden as further evidence of the chill.

“Closing doors to reporters is hurting themselves,” Bob Woodward, one of Downie’s colleagues on the Watergate case, told him, “because less responsible news organizations will publish or broadcast whatever they want. In the end, it does not hurt the press; it can damage national security.”