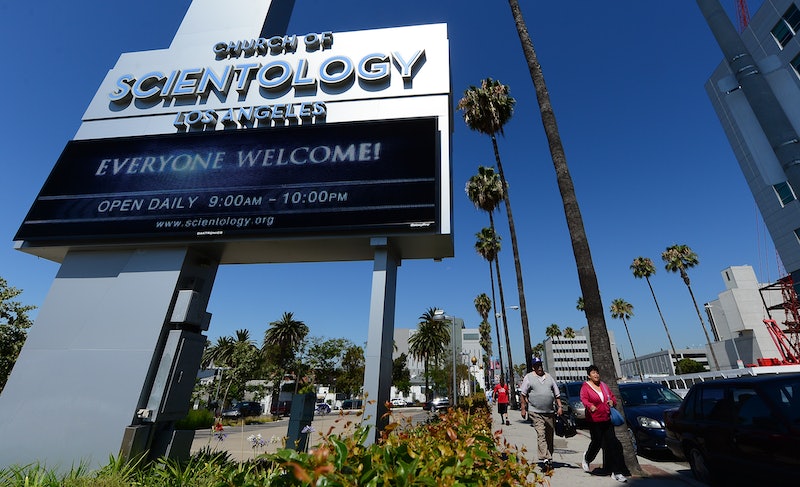 In the wake of HBO's Going Clear, Scientology appears to be getting another high-profile look into its church and practices. Ronald Miscavige Sr., father of Scientology leader David Miscavige, will write a tell-all book If He Dies, He Dies about his controversial son's role in the church. St. Martin’s Press will reportedly publish the book. This news comes after an April 8 Los Angeles Times article alleging that David had hired private detectives to follow his father, fearing that he would divulge important information about Scientology. The title, If He Dies, He Dies, is an allusion to a particular anecdote detailed in the L.A. Times article:

Once, while tailing Miscavige on a shopping trip, Powell and his partner watched him grasp his chest and slump over while loading his car. After his arrest, Powell told police he'd thought Miscavige was having a heart attack and might die. He said he phoned his intermediary for instructions. Two minutes later a man who identified himself as David Miscavige called him back, according to records."David told him that if it was Ron's time to die, to let him die and not intervene in any way," the records state, noting that the apparent emergency passed "and nothing further happened."

A representative from the Church of Scientology denied the report in a statement to Vanity Fair. In the same statement, the representative said, "The Church knows nothing beyond media reports about any purported book."

Ronald Miscavige left Scientology with his wife Becky in 2012, effectively becoming an "SP," Scientology wording for "suppressive person," or a member who has been excommunicated from the church.

David Miscavige succeeded L. Ron Hubbard as the leader of the Church of Scientology after Hubbard died in 1986. He entered the church with his father Ronald in 1972, after his father allegedly hoped to find a cure for David's childhood asthma. Under Miscavige's leadership, the Chruch has attracted high-profile Hollywood members, most famously Tom Cruise and John Travolta, and has been shrouded in controversy. Scientology opponents have called on David to show his allegedly missing wife Shelly Miscavige, who has not been seen in the public eye since 2007.

David has also been the subject of other tell-all books, including part of Lawrence Wright's National Book Award finalist Going Clear: Scientology, Hollywood, and the Prison of Belief , which was made into an HBO documentary. His niece Jenna Miscavige painted a damning picture of David in her 2013 memoir Beyond Belief: My Secret Life Inside Scientology and My Harrowing Escape.

The Underground Bunker, a blog that claims to "monitor breaking developments" around Scientology, has reported that Ronald has been working on his tell-all for "several years."

UPDATE, 2:08 p.m.: The Church of Scientology has issued the following statement to Bustle:

Mr. Miscavige has always taken care of his father and continues to do so. Beyond that, as a matter of policy, neither the Church nor Mr. Miscavige comments on members of his family. The Church knows nothing beyond media reports about any purported book.

So let me be clear: No such conversation with Mr. Miscavige ever took place and any claim that one did is provable bullshit.