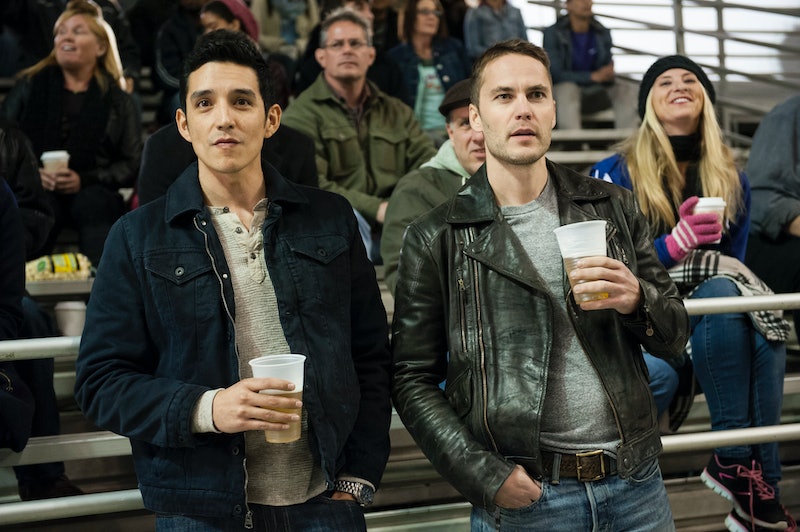 This could be a fascinating character progression if, and only if, it's done properly. During the third episode of True Detective Season 2, "Maybe Tomorrow," we get yet another small glimpse into the life of Taylor Kitsch's Paul Woodrugh, the most mysterious of all the main officers investigating Ben Caspere's death. So far, we know a lot about Ani Bezzeredes, from her early life at a hippie commune to her sister's new job. And with Ray Velcoro, we seem to be getting more information about him than we ask, including his troubles with his ex-wife and trying to gain custody of his son, as well as his anger issues and corrupt nature, both on the job and off. But with Paul, all we really know is that he was accused of soliciting sex from an actress he pulled over (which wasn't true) and that he and his girlfriend broke up. But finally we get more. We learn that during his mysterious Black Mountain time, he may have had a romantic relationship or encounter with one of the men in his unit.

We discover this when his friend attempts to reconnect with Paul and talk things through about his life. He mentions that he still thinks about their time together during their Black Mountain gig and tries to touch Paul in a caring, loving way. Paul pushes him off, leading to an argument before Paul walks away with a regretful look. But here's the thing about this storyline, I'm all for Paul being revealed as a gay character and watching him continue to grapple with that, but not if it's used as just that: a reveal, or a twist of some kind. This is not something that should be played for shock value.

We've already seen that Paul seems to hold anger towards gay men. He's made comments about gay people, including using a degrading slur when referring to a man who supposedly hit on him at a bank. He's already been seen taking Viagra-type pills in order to have sex with his now ex-girlfriend whom he couldn't seem to be truly intimate with on an emotional level either. In the third episode, he's also seen looking extremely uncomfortable while talking to two male sex workers at the club Frank's old friend Daniel runs. Though Paul has not come out on the show or discussed his sexuality, it's something others have already discussed about the character. Pajiba's Dustin Rowles called for True Detective to give Paul "a little more complexity and nuance" than being "a self-hating gay stereotype," while after watching last week's episode, Hitfix's Alan Sepinwall posited that Paul is "gay and trying very very hard not to be."

Kitsch actually implied that his character is gay in an interview with The Daily Beast. When Marlow Stern said that Paul has "gone to very long lengths to pass as a straight guy," Kitsch seemed to agree with the statement, and then began talking about playing a character who carries a heavy secret.

Right. I think that’s something that’s just in himself...With Paul, you really do see how much shame he carries, and it slowly unfolds throughout. I will say that in Episodes 4 and 5, you really see this guy fall. And the deeper we get into the season, the more desperate Paul gets for having to hold that secret and hide who he really is. It’s pretty f**king tragic to not be able to be free, or to hold shame about something like that.

Now if True Detective continues to unravel Paul's emotional state and "secret" in the way Kitsch states, it would be fascinating to watch. But just as any other aspect of someone's identity should be, the storyline needs to be handled carefully. It shouldn't be revealed as some sort of shock, or not properly integrated into his character. I also hope that if Paul is gay, we see some reasoning as to why he feels the need to keep his sexuality a secret. We get a glimpse of him interacting with his mother, did she raise him to have homophobia or does he just have fear and hatred towards his identity for some other reason?

True Detective needs to show us Paul's real struggle as he either continues to hide his sexuality or decides to come out. Perhaps it has something to do with Black Mountain, perhaps it has something to do with the woman who accused him of soliciting sex from her. No matter where this character goes, I just hope any story of his sexuality is done in the most realistic, organic, truthful way possible. Paul, and the audience, deserves that.