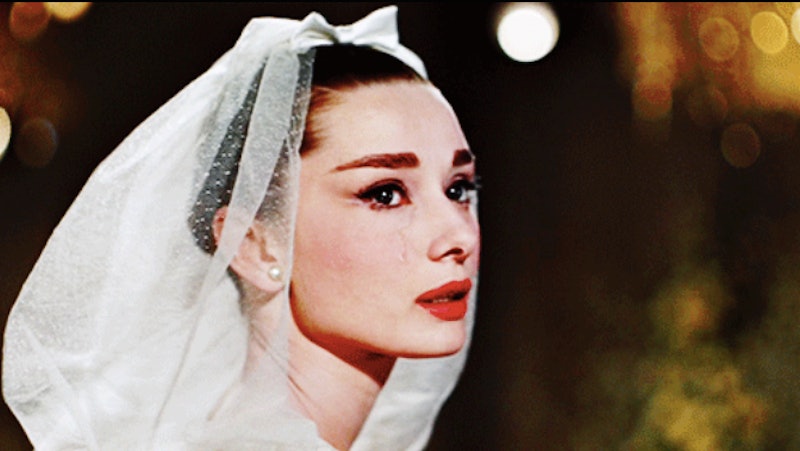 Cancelling weddings isn't just for Bristol Palin. Some people really do get well into the thick of wedding planning, with dress, ring, and hideously embarrassing first dance song picked out, only to discover that it just ain't going to work. That bit's hard enough — but going through the song and dance of telling everybody you're canceling your wedding is a superhuman effort. And if you don't do it properly, Great Aunt Mary will turn up to the reception venue and sit quietly for several hours wondering where everybody is. But fear not! I have the answer — or at least the answer as of the Golden Age Of Etiquette.

Etiquette guides are detailed about how to behave on every conceivable social occasion, from napkins at dinner parties to refusing admirers on the street. They've been around for centuries, but for our purposes, I've picked the three that remain most popular: Emily Post, doyenne of American social faux pas since 1872; Debrett's, the centuries-old British etiquette guide that the Queen would throw at you if you were marrying Prince Harry; and Amy Vanderbilt's Complete Book Of Etiquette, from 1952.

So you've discovered the person to whom you'd planned to hitch your wagon is a cheat, a liar, a nuisance or you just want to run off to Tahiti and become a marine biologist. Now what? According to Post and the gang, you're going to need a stiff upper lip, a butler, and a boatload of monogrammed note cards.

1. Remember; It's Not Canceling, It's "Recalling The Invitations"

I actually think this is eminently classier than weeping "IT'S ALL GONE HORRIBLY WRONG" in a group email. One never says the wedding is dunzo because of drug problems/infidelity/a bizarre fetish involving giraffes; one simply recalls the invitations . Or rather, one's mother does — if you're the bride, your parents will of course have sent out invitations inviting people to your nuptials, so they have to ask for them all back. Sorry, mom.

The realities of this aren't fleshed out, though. Are guests expected to literally mail the invites back? Or are they expected to keep them? Give them to the butler to dispose of? Destroy them in the nearest polite and etiquette-approved small fire?

Nothing, but nothing, in the world of etiquette is as important as the proper wording on the note cards you send to people you barely know. If you shoot a diplomat on the street, Post, Vanderbilt et al can ensure your forgiveness, provided you put your apology in the correct wording on good notepaper. With an engraved heading, obviously.

So doing something as societally detrimental as buggering off with the best man needs very controlled grammar. Think of it as saying the whole thing through gritted teeth and an air of repressed emotion. Vanderbilt suggests this hugely passive-aggressive haiku:

Dr and Mrs [your parents]

announce that the marriage of their daughter

[the person you'll have to avoid at parties now]

will not take place

Period — except that there isn't one. Note the floating, gentle non-ending sentence, threatening everybody to say one f*cking thing we dare you. Emily Post goes with:

Mr. and Mrs. [your parents]

They must be, Genevieve. If only you knew! The fate of the world is at stake!

3. Telephoning Is For Last-Minute Cold Feet Only

Telephoning is for the gauche, tradespeople, and those who cancel weddings so suddenly they don't have time to have cards engraved. (No, really, having engraving time for your cancellation notice is a genuine factor for Vanderbilt.) You're allowed to call around — or, hopefully, delegate people to do it for you — only if you're literally leaving people at the altar. Nobody wants to hear your voice deliver important social news! They want a card, so they can flap it dramatically in the air while they faint!

(Vanderbilt allows telegrams, but only at the very last minute, presumably on your way to jail or something.)

You will have to tell The Public. This, Post and the rest agree, is a necessary consideration, particularly if you announced the wedding publicly too (i.e. "did a Cumberbatch"). Keeping it short, snappy, and so utterly mysterious that people will be confused for years is the key.

Debrett's severe example is: The marriage arranged between Mr Richard Manners and Miss Caroline Debrett will not take place. That's it. Don't even think of thanking anybody for their consideration or asking for privacy. You do not have emotions! You have etiquette!

5. Don't Keep Gifts Unless One Of You Died

Yeah, no, early wedding gifts are not going to be able to stick around, guys. They need to be returned with a nice note to explain that while you love the juicer, you kind of want to use it on your no-longer-future-spouse's fingers. There are very few exceptions to this. (Nobody, interestingly, raises what to do with the ring, leaving the possibility that it is entirely etiquette-friendly to pawn or flush it.)

The one exception? You can keep gifts, kindly enough, if one of you unexpectedly died. Presumably because you'll have enough going on without trying to mail back a toaster.

6. Death Is The Only Valid Excuse

Number one etiquette rule about cancelling weddings from the Holy Three? Do not explain. Let nobody know why your nuptials are a goner. Be an enigma, hiding behind impeccable note cards and seriously snappy newspaper announcements. You have committed a Social Sin; the less said about it the better.

Unless, of course, somebody died. In which case you're allowed to be virtually verbose about it. "Owing to the recent death of Mr Samuel Herbert, Mr and Mrs John Debrett deeply regret that they are obliged to cancel the invitations to the marriage of their daughter Caroline to Mr Richard Manners," Debretts suggests.

Of course, if you're actually canceling a wedding, there are far more useful, sensitive guides about the process out there. (No, the caterers will not be mad at you. They know it happens.) But while you're coping with the madness, at least be glad you don't need to track down a telegram operator at 3 a.m.