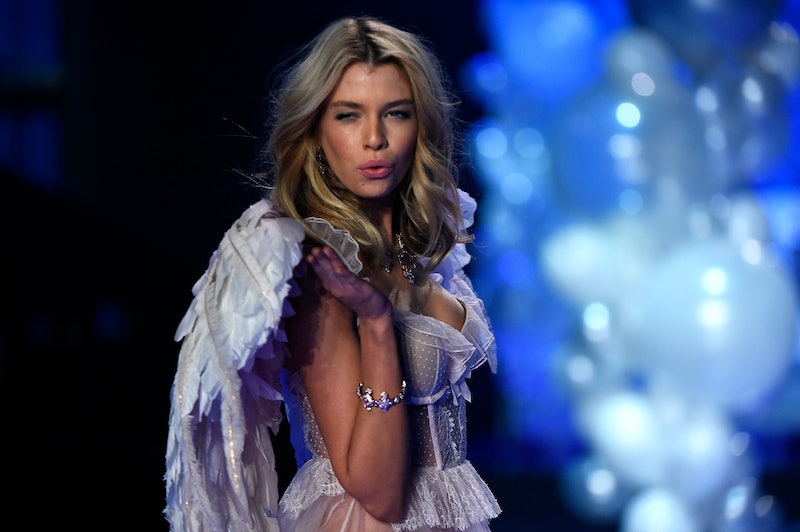 The celebrity relationship rumor mill has no chill when it comes to any evidence that Miley Cyrus and Stella Maxwell are dating. The "Wrecking Ball" singer and Victoria's Secret Angel have been close for months, going on vacation together and posing in super fun, jealousy-inducing pics all over Instagram. And speculation that the two are an item has only heated up now that the paparazzi caught Miley Cyrus and Stella Maxwell kissing in super sweet but super grainy photos and video obtained by the Daily Mail.

Of course, just because the two were caught "passionately kissing" (as pretty much every news outlet has referred to their lil makeout sesh), it doesn't mean they are officially a couple. Still, it's understandable that there's a lot of curiosity about Cyrus' rumored lady love, if not for the sole fact when it comes to any person the singer dates, the world (and the Miley Cyrus stans) need all the details.

So, who is Stella Maxwell? Here are five fast facts that you need to know about the 24-year-old VS model — you know, so you, too, can be an expert on Miley Cyrus' rumored girlfriend. After all, isn't that we all aspire to be? (The answer is yes.)

1. She has a diverse cultural background

According to the Daily Mail, Maxwell's parents are Northern Irish, but she was born and lived in Belgium until she was 13. Maxwell herself told V magazine that she "grew up in New Zealand," but she also reportedly lived in Australia as well. She's now a bicoastal badass and splits her time between New York and Los Angeles, as one casually does. She also apparently has an American accent when she speaks.

When V magazine asked Maxwell how she and Cyrus met, the model joked that they connected on Grindr before revealing that "we met through mutual friends via Instagram, which is where [Cyrus' best friend] Cheyne [Thomas] contacted me about taking some photos," she said. "It's been a trip to hang out and see a little of their world. Felt very organic and right." Cute!

3. She doesn't take herself too seriously

Just reading her V magazine interview, it's clear that the blonde stunner has a super chill, dry sense of humor. The entire thing is filled with her laid-back attitude, but my favorite part is when she told the reporter that she's a hologram when she was asked what people would be surprised to know about her. Love. It.

Maxwell and fellow Victoria's Secret model Barbara Palvin (who was rumored to have dated One Direction's Niall Horan) are total besties. They're so close, in fact, that they're "like family," according to Maxwell herself. Aw!

Maxwell Instagrammed the above photo the day that same-sex marriage was declared legal in all 50 U.S. states. Preach it, lady.