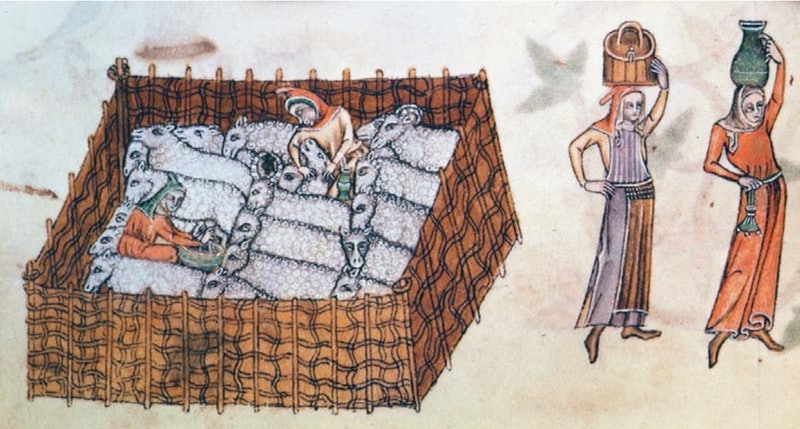 Here's the thing: medieval punishments may seem completely bonkers, but when you catch sight of the laws they were trying to punish, they make a certain sense. The medieval European world of crime and punishment was radically different to ours — for one, there were no policemen, so if you wanted somebody caught you had to raise the "hue and cry" and hope everybody dropped their stuff and ran after them — and laws controlled everything from moral behavior to clothing and death. But even in that environment, some crazy medieval laws stand out for their sheer ridiculousness. You could be arrested for stealing a whale? What?!

Medieval Europe is hardly alone in the strange-laws department. And many of the laws make sense, once you put them into context and realize what lay behind them — a fear of heathens and their pagan mince pies, for example, or wanting to avoid your house being burned down by a football-playing mob. Just because they seem to be coherent, though, doesn't mean they're any less funny.

Most of these are, thankfully, no longer in existence, and won't apply in a court of law. May you wear sables tipped with gold and play tennis indoors all year round in peace.

OK, this one's fair enough — soccer wasn't exactly what we'd call a "civilized" game back then. Forget David Beckham delicately kicking a ball: this was essentially war, and when it was played in populated areas it caused complete havoc, a lot of property destruction, and even deaths. It was completely outlawed in England in 1314.

2. Dying In The Houses Of Parliament

How on earth this one, which is actually still a law in the United Kingdom, has ever been enforced remains unclear. (A poll in 2007 rated it one of the silliest laws in history.) Technically, it's more about decorum than disturbing the peace with a sudden flop during a speech, though. People who die in the Houses of Parliament are technically entitled to a state funeral, so the law's in place to stop people bringing in dying relatives to get them televised funeral rights.

This wasn't strictly medieval; it was brought in by Thomas Cromwell as part of a series of laws about destroying "pagan" customs in England. It was booted out by Charles II, thank goodness, so British people can still go around eating strange little pies wearing Santa hats all they like.

4. Getting Married Without Your Master's Permission

A terrible law that indicates just how miserable it was to be on the lower end of the social ladder, you could get into severe trouble if you were a peasant working for a landowner, and got married without asking him first. It gets worse: if you were a woman and your husband died, your landowner-in-charge could force you to choose another husband (and pick one for you) within a small amount of time. No cooperation? Punishment.

This one makes a bit more sense when you realize that the medieval palate included basically everything, from porpoise to beaver. And whale, apparently, was on the menu — but only for the king and queen. Whales are "royal fish," and when they wash up they automatically become the property of the royals in charge — though the head is the king's and the tail is the queen's.

6. Not Washing Your Sheep

In a case in the 1200s recorded by Nathan Belofsky in The Book Of Strange And Curious Legal Oddities, an entire village, serfs and otherwise, was punished for "failing to wash the lord's sheep". Presumably there was a story behind that, but nobody left any details. Poor sheep.

7. Not Turning Up To Court If You Found A Dead Body

This dates back to 1241, but probably held true a lot earlier. If you found a dead body you were classified as the "first finder" — and, in those days without police officers or people to gather evidence, you were expected to turn up to court to tell people about it. If you didn't, you didn't just get in trouble — so did the entire village where the body was found.

8. Being An Innocent Dude At A Riot

Rioting just sort of happened in medieval Europe. It was only when things got sticky and somebody was killed, according to Belofsky, that the law got involved. If a murderer got away in a rioting crowd, the authorities were perfectly entitled to pick seven men from the surrounding area and put them through a variety of "tests" to determine their guilt. Said tests, in case you were wondering, didn't have anything to do with what you could testify you'd actually been doing at the time.

9. Playing Tennis (If You Were Poor)

It was legally forbidden, by a law of 1495, for young men who weren't nobles — working boys like apprentices and servants — to play tennis. It was thought to be distracting and to encourage gambling. The laws applied year-round, except at Christmas, and even then, they could only play it indoors, at their master's house.

10. Wearing Sables With Heads Made Out Of Jewels

This was part of the sumptuary laws of Italy in the 1500s, which were designed to reduce conspicuous consumption by restricting who could wear what, by class and income. If you were incredibly rich you could wear whatever you damn well liked, but if you weren't, lord help you if they caught you wearing a zibellino , a dead sable with its heads and feet covered in jewels. Apparently, this disgusting thing was enough of a trend to merit its own law.