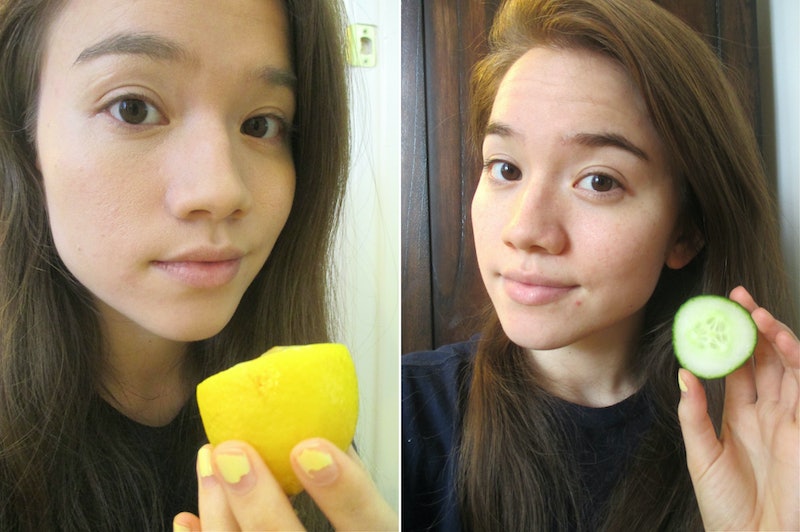 Regardless of where it actually originated, the saying "beauty is pain" sure relates to medieval times. I mean, beauty tips from the middle ages were gross. Studying Chaucer for four years in college, I spent a fair amount of time learning about what was considered comely, especially during the late middle ages:

Hir mouth ful smal, and therto softe and reed;/ But sikerly she hadde a fair forheed;/ It was almoost a spanne brood I trowe;/ For, hardily, she was nat undergrowe.

From this portrait of the Prioress in addition to the Wife of Bath's (from the General Prologue to the Canterbury Tales), we learn that red lips, large foreheads, and gap-teeth were considered attractive features for a woman to have around the 14th and 15th centuries. But what we don't learn is how women went about achieving these features.

These days, we can simply dye our hair, apply foundation and concealer, or use some other pre-made colored powder or cream products to change or hide aspects of our appearance we aren't the fondest of and accentuate features we love. During the middle ages (around the 5th to 15th century) however, achieving the desired look was not as easy... or as painless. While some beautification processes were a little more simple and included ingredients familiar to us, others were much, much more involved.

So to see what all the medieval hype was, I tried some of the simpler beauty tips to see how well they worked. (Unfortunately?) I didn't test any tips that involved my harvesting hog's lard, covering my face with blood, or removing (more) hair from my brows or hairline. However, to achieve some desired outcomes, I did supplement modern products for a more complete look. Here's how my medieval beauty routine turned out.

The following images show the "before" on the left and the "after" on the right. And please ignore my hideously modern T-shirt.

Along with strawberry juice, cucumber juice was also used to reduce redness. I found this tidbit especially neat because of how many cucumber-infused products are still on the market today to help calm the skin. Since I didn't have any strawberries around, I went the cucumber route this time around. After rubbing a juicy cucumber slice all over my face, I noticed that 1) my skin smelled amazing; and 2) I had a nice, luminous complexion. But did it relieve my redness? Not enough for me to toss my modern creams for good.

Blemishes of any kind were unwanted in the middle ages — and that meant moles and freckles, too. Since I couldn't find an amethyst to lick and subsequently rub all over my face, I cheated and caked on the foundation and concealer to hide, to the best of my ability, my oh-so-offensive face demons.

And while I was at it, because eyebrows were best if thin or non-existent (and I quite like my fuller face-caterpillars), I tapped some foundation over mine to hopefully make them less displeasing without having to pluck them away.

Apparently, lemons were used to add color to the lips, which sort of makes sense if the acid irritates them enough to cause inflammation (surprisingly one of the less painful beauty tricks). Maybe it added a slight flush to mine after some rubbing, but the stinging and the dryness made me long for my favorite red lippy instead.

And because I did not have the proper plants to grind up and create my own rouge, I did use my favorite red lipstick to add some color to my cheeks (and a little more to my lips). Eye makeup was not really en vogue during the late middle ages though, so I left my eye area untouched.

To make hair smell nicer, women could sprinkle in some powdered cloves, rose, nutmeg, watercress, and/or galangal. I chose nutmeg, and I must say my hair did smell quite delicious. After rubbing it in, dare I say I even noticed a little extra volume? Of the tips I tried, this was definitely my favorite.

For a little sex appeal, I decided to play up my forehead instead of trying to create a gap in my teeth. However, I was not about to dissolve my natural hairline. So instead, I pulled my hair back as tightly as I could. I then took some highlighter to the center of my forehead to help it stand out even more. But despite wanting a forehead that would bring all the knights to my farm, I thought I should have some shame. So I covered my hair with a makeshift hood. (Well, most of it; if you got it, flaunt it, right?) And that, my friends, is how I became a modern-day medieval seductress.

More like this
Pat McGrath’s New Highlighter Duo Will Give You A Galactic Glow
By Tomi Otekunrin
Lily Collins Swears By This Product For Perfectly Air-Dried Hair
By Keely Weiss
2022's Top Wedding Hair & Makeup Looks, According To Pinterest
By Olivia Rose Ferreiro
19 Memorial Day Beauty Sales To Shop In 2022
By Audrey Noble
Get Even More From Bustle — Sign Up For The Newsletter