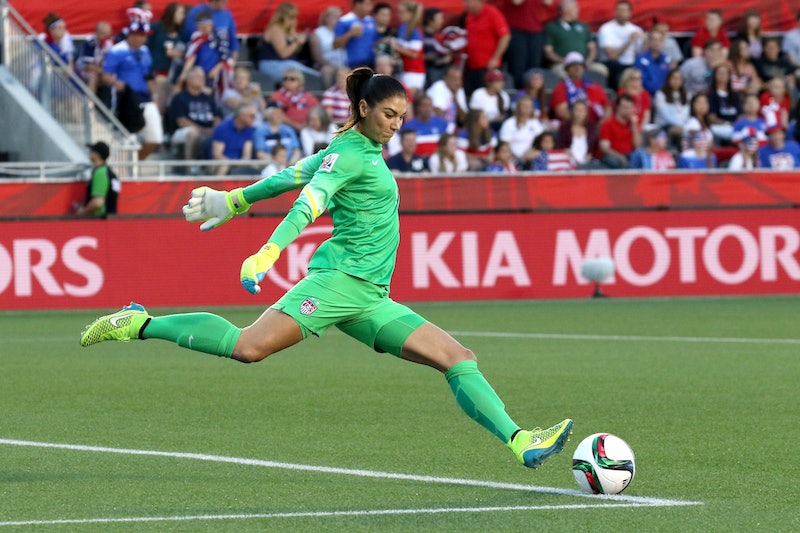 This year's Women's World Cup has sparked dozens of conversations about discrimination and gender equality in professional sports, and now that the tournament is winding down, with the United States Women's National Team slated to play in Sunday's final match, it's become abundantly clear to even the most vocal haters that these women can play good soccer. But there's still one big difference between the Men's and Women's World Cups that even I, someone who doesn't watch many sports except when there's beer involved and writes about fashion and beauty for a living, was able to spot: The women competing in the World Cup are wearing makeup.

The makeup is subtle, but it's visible, and once someone points it out to you, you won't miss it. As I've been watching the games and the short clips online, I spot a swipe of eyeliner here, a flash of eyeshadow there, mostly from the members of the American squad. Hope Solo, the team's superstar goalie, has eyebrows that are on fleek, and it's been rumored that Sydney Leroux wears false eyelashes while playing.

But it turns out that this isn’t just a thing that elite female soccer players do for the World Cup. Dig a little, and you’ll find that lots of female athletes wear makeup when competing in world class events. Figure skaters and ice dancers and gymnasts all wear makeup at the Olympics, as do women competing in sports that are traditionally considered a bit more “masculine” (which we can all agree is a silly and outdated way to think about sports, right?). The female hockey players on the U.S. and Canadian teams wore makeup when competing at the 2015 Winter Olympics in Sochi, Russia, and there was some controversy at those games when a commentator made a remark about the female downhill skier's makeup, saying, “All of that while in a Lycra suit, maybe a little bit of makeup — now that is grace under pressure.”

Part of the reason seeing female athletes wearing makeup feels out of place comes down to the practical considerations. Even the best waterproof mascara or eyeliner drips if you're sweating enough. There's also strong evidence that wearing makeup while working out is bad for your skin, and I’m pretty sure playing soccer in the World Cup counts as working out.

But the sexist comments, from spectators and commentators alike, are at the root of this culture of shaming, and the main reason why wearing makeup while competing in a world-class tournament seems inappropriate. There’s a negative stereotype associated with women who wear makeup, a mistaken belief that putting on some mascara somehow shows a lack of commitment to the game. How can someone be good at sports if they're worried about how good they look?

A recent example of this type of backlash is Ashley Wagner, the American figure skater who, it was speculated by sports media and fans, made the U.S. Olympic Figure Skating Team solely because of her looks, not her skills on the ice. (For the record, she won a bronze medal at the Sochi Olympics.) It's also disheartening when this negative stereotype is perpetuated by fellow female athletes. When asked if she wears makeup while competing, Maria Sharapova quipped, “I don’t wear makeup on court… I’m sure divas do that, right?"

If you’re being cynical, you could say that female athletes are pressured to wear makeup to get endorsement deals and sponsorship money, and unfortunately, there is some truth to that. It's not enough to have a winning record or a bunch of medals for a female athlete to land a sponsorship, especially when companies don't seem to be willing to spend big money on deals with women in sports; Fortune publishes the Fortunate 50, a list of America's highest-paid athletes, every year, and the only woman to be listed in 2014 was Serena Williams. To be noticed by a brand requires female athletes to be sexy and conventionally beautiful, and wearing makeup and looking good on the field is one way to grab that attention.

But I have a somewhat more positive perspective on this trend, and I don't think seeing women in sports wearing makeup, especially at this caliber of performance, is a bad thing or simply a ploy to get money from big companies. I think it can be a form of empowerment, a positive statement about femininity and athleticism.

A Brazilian soccer official was quoted in The Globe and Mail explaining that as women's soccer has been getting better and more competitive, it's been getting more attention, which in turn encourages the athletes to wear makeup because they're being noticed: "Now the women are getting more beautiful, putting on make-up. They go in the field in an elegant manner." And while I think his phrasing is a little misguided, I think there is something to be said about women being allowed to present their own unique version of womanhood while still being total bad asses on the field or the court or whatever other place sports are played at.

A woman doesn't have to be a tomboy to be good at sports, but women's sports shouldn't have to be hyper-feminized or sexualized either. What really needs to end is this mistaken belief that a woman can't both be conventionally beautiful and feminine as well as a serious athlete, and seeing women wear makeup at the World Cup is one way to break down this negative stereotype.

Commentators and spectators shouldn't shame female athletes for their decision to wear makeup, just as they shouldn't expect the players to wear makeup in the first place. If a woman wants to rock a red lip while playing sports, then so be it, and if she doesn't, that's also totally OK.

Being a world-class female athlete doesn’t mean giving up one's femininity, and wearing makeup doesn't make a woman any less of an athlete. And makeup or not, the women competing in this year's World Cup are playing some amazing soccer, so support them and women's professional sports by tuning into the final match this Sunday.