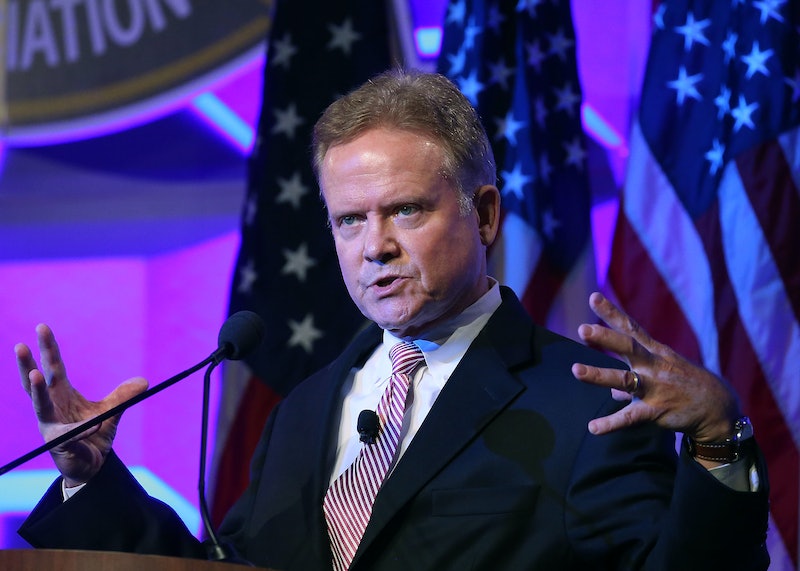 Another Democrat has finally jumped into the ring: Former Virginia Senator Jim Webb announced on his website Thursday that he would be running for president in 2016. In his statement, Webb discussed his opposition to the Iraq War, his experience in the military, his commitment to immigration and criminal justice reform, and his desire to institute economic fairness. But nowhere in his detailed statement does he mention recent strides toward equality — most recently, the establishment of marriage equality as the law of the land. So, what is Jim Webb's stance on gay marriage? Let's take a look at his opinions on the issue of LGBTQ rights.

Webb is similar to fellow Democratic candidate Hillary Clinton; both of them were originally vocal in their opposition to marriage equality but have come a considerably long way. In 2006, when he was a candidate for Virginia Senator, he said that he believed marriage was between a man and a woman, according to CBS, but he opposed a Virginia constitutional amendment that attempted to define it as such. Instead, he said in the Virginia 2006 Democratic Senate Primary Debate that he supported civil unions.

Then, in 2010, he voted to repeal Don't Ask, Don't Tell despite, according to The New York Times, having voted against allowing a repeal in a closed Senate Armed Services Committee vote and never publicly expressing his support for a repeal.

But despite his past stances on the issue, Webb said on NBC's Meet the Press in October that he was "really comfortable" with the country's "evolution" when it comes to marriage equality.

"I think this has been a good thing for the country," he said during the interview.

But whereas Clinton has vocally supported marriage equality — publicly celebrating the SCOTUS ruling on the matter and going so far as to release official campaign merchandise — Webb has not elaborated on his stance much more than saying that he is "comfortable" with public opinion.

A Facebook post by Webb in April called the evolution a "healthy" one, indicating that he has come to fully support marriage equality — though it would be difficult not to, considering the Democratic Party's position on the issue — but if his statement announcing his presidential candidacy is any indication, it is not part of his official platform.

So what does this mean for 2016? Webb seems to stand to the left of Clinton on issues like criminal justice and immigration reform, but he will have to step up to the plate when it comes to issues like marriage equality and LGBTQ rights if he hopes to develop increased name recognition and provide an actual challenge to Clinton and Bernie Sanders, who has recently been making waves and drawing increased public support.