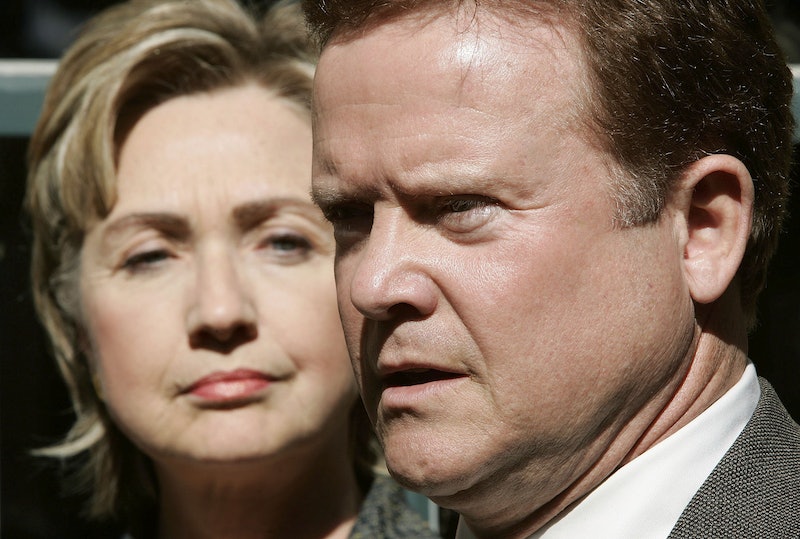 Former Virginia Senator Jim Webb is joining the race for president in 2016, according to several news reports. Following his speech on Thursday to the National Sheriff's Association, Webb told reporters that he expected to things "to get a whole lot busier over the next week or so," a statement that several outlets interpreted as evidence of his plan to officially launch his campaign. That enigmatic quote was followed by an email to supporters that, according to the Washington Post, called for "a President who understands leadership, who has a proven record of actual accomplishments, who can bring about bipartisan solutions, who can bring people from both sides to the table to get things done.” Webb is the fourth Democrat to formally announce campaign plans. He joins a packed primary race defined by Hillary Clinton's formidable, and comfortable, place in the lead.

Voters might struggle to remember Webb and his political views, since the Virginia senator retired from politics in 2013 after serving only one term in the Senate. During the Reagan years, Webb served as Secretary of the Navy and as Assistant Secretary of Defense. Most recently, Webb is notable for his apparent defense of the Confederate flag following the brutal, hate-fueled murder of nine churchgoers in Charleston, S.C. At the time his statement (which appeared as a message on Webb's Facebook page) was at odds with not only his primary opponent for the Democratic nod, but most of the Republican candidates:

Honorable Americans fought on both sides in the Civil War, including slave holders in the Union Army from states such as Missouri, Kentucky, Maryland and Delaware, and that many non-slave holders fought for the South. It was in recognition of the character of soldiers on both sides that the federal government authorized the construction of the Confederate Memorial 100 years ago, on the grounds of Arlington National Cemetery.

This is a time for us to come together, and to recognize once more that our complex multicultural society is founded on the principle of mutual respect.

To understand Webb's place in the widening race for president, it's important to compare his record to those of frontrunner Hillary Clinton on three of the major social and political issues in 2016: federal debt, gun control, and reproductive rights.

Hillary Clinton has called out income inequality as a defining national issue, according to the Washington Post, but her campaign has stopped short of outlining a strategy for tackling financial regulation.

I think certainly we need to tighten the federal budget where appropriate. One of the things that could be early on is to basically audit every federal agency in terms of their programs and have them re-justify programs.

Clinton is in favor of tightening gun control. Following the shooting in Charleston, Clinton spoke passionately before the U.S. Conference of Mayors about the need to curb access to firearms. According to CNN, Clinton said:

I lived in Arkansas and I represented upstate New York. I know that gun ownership is part of the fabric of a lot of law abiding communities. I also know that we can have common sense gun reforms that keep weapons out of the hands of criminals and the violently unstable while respecting responsible gun owners. The stakes are too high, the costs are too dear, and I am not and will not be afraid to keep fighting for common sense reforms and along with you, achieve those on behalf of all who have been lost because of this senseless gun violence in this country.

Webb has taken a more conservative position than many Democrats on gun control. As a senator, he voted for several measures to protect ownership rights under the Second Amendment. According to CBS News, the then Virginia Senator said:

I believe wherever you see places where people are allowed to carry, generally the violence goes down.

According to nonpartisan voter information site OnTheIssues.org, Webb is in favor of protecting safe, affordable access to abortion. The website quotes Webb's 2008 interview for the Wall Street Journal:

I drifted away from the Democratic Party on national security issues but I never left on social issues and issues of economic fairness [...] I believe the power of the government ends at my front door unless there is a compelling reason to come inside.

It's no surprise that Hillary Clinton is a staunch defender of reproductive rights for women. On several occasions, Clinton has defended women's rights in the U.S. and worldwide to make their own health decisions on matters from birth control to abortion.

The two candidates are divided in several key ways. Webb's stance on gun ownership and federal spending could make him a viable option for voters looking for a more conservative alternative to Hillary Clinton.