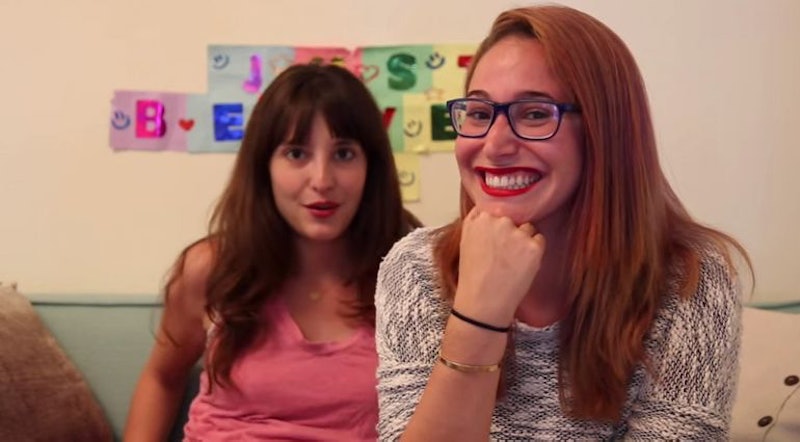 The term “sex-positivity” is thrown around in many feminist circles, but it is often misunderstood. No, it is not a philosophy that means that you must have as much sex as you possibly can if you want to be a feminist — which many people incorrectly claim in order to deny the liberating powers of the movement. Sex-positivity means that any decisions regarding sexuality, sexual activity, and relationships that are consensual, healthy, and safe should be celebrated as empowering, feminist acts. You can have as much or as little sex as you want, so long as you ensure that those behaviors are right for you and your partner(s). And sex-positivity asserts that there is no shame in your game.

Unfortunately, the media is saturated with less than sex-positive representations of female sexuality, but comedians Allison Raskin and Gaby Dunn (who you may recognize from numerous BuzzFeed videos) provide a different perspective through their sex-positive comedy web series, Just Between Us. Playing fictionalized versions of themselves, the two best friends perform sketches and provide sex and relationships advice that is both hilarious and truthful. Raskin portrays an anxious and prudish character while Dunn plays with a wild, sex-obsessed personality. Their dynamic allows for comedic, feminist critiques of slut-shaming, as well as humorously informative discussions of sex-positivity, consent, queerness, insecurity, and mental health. Having grown up feeling bad about her sexual desires and choices, Dunn says, "For me, sex-positivity has been everything... If I can just run my mouth and be positive about all the things the world deems weird or shameful then I'm happy."Raskin says, "You should be able to stand up for equality without fearing a backlash. I prefer to do it with jokes but long rants have also proven effective." Dunn adds, "I think feminist humor is the best kind of humor because as women, we need some relief. We need to laugh at these things so we don't cry."Read on for 10 ways you can make your personal life healthier and more sex-positive:

While slut-shaming is clearly prevalent throughout our entire culture, it is especially heartbreaking to watch girls slut-shame each other because that is what society trains us to do. It's a way for women to participate in their own marginalization, and it's disgusting. Becoming sex-positive requires you to do a lot of unlearning: why are sexually active women viewed as "damaged goods"? Why are women viewed as "goods" or objects in the first place?

It's important to recognize that slut-shaming takes many different, terrible forms — some less obvious than others. While I've noticed that even many of my not-as-openly-feminist peers reject the false victim-blaming narrative that declares skirt length to be the cause of rape, slut-shaming still rears its ugly head into "feminist" spaces often. I have heard women disparage sex workers as fundamentally broken, and I have heard women mock other women if they have multiple consensual, sexual partners at the same time. That all constitutes slut-shaming, so it all must go."I grew up thinking I was different or wrong for not believing sex to be a bad thing, so in the last few years as I've grown more confident and more open about sexuality, I feel my comedy's benefited greatly. I love treating sex as... normalized, no big deal," says Dunn.

2. Always Remember That Consent Is Sexy AND Necessary

Thanks to the tireless work of activists across the globe, the topic of consent has begun making its way into mainstream conversation. In the episode, "What Is Consent?", Gaby and Allison define the term as an enthusiastic agreement between all parties during any kind of encounter at any time. Gaby also extends the definition to include listening when someone expresses a lack of interest in you, rather than continuing to pursue the person.

You can't be sex-positive if you don't actively practice and demand consent. Sex-positivity requires that you communicate and respect both your boundaries and your partner(s') boundaries.

Sex-positivity, as Rachel White writes for The Frisky, “is not sexual hedonism. It’s about ethics and self-development rather than simple pleasure-seeking." You must be comfortable enough with yourself to allow self-exploration, while remaining confident and secure enough to constantly practice self-care — why are you engaging in certain behaviors? Are they really good for you? Why aren't you comfortable with certain acts?

In an episode of Just Between Us discussing self-confidence, Gaby describes the revolutionary power of loving oneself in a culture where social norms and media messages encourage self-loathing and insecurity. Likewise, Allison points out that we would never talk to other people as cruelly as we talk to ourselves. Being kind to yourself means that you are way more likely to enter emotionally safe relationships with kind partners.

4. Sex-Positivity Doesn't Mean You Have To Participate In Situations That Are Emotionally Or Physically Unhealthy For You

Sex-positivity should encourage you to explore your sexuality safely, free of stigma and shame. It also means that you own your sexuality in such a way that you honor your boundaries and won't get pressured into activities that make you uncomfortable. Maybe you'll decide to practice polyamory, but then you'll meet a new partner and realize that imagining this person with someone else upsets you. It is sex-positive to express these concerns to your partner so that you can continue the relationship in an emotionally safe way. It is not sex-positive to pretend to be "cool" with things when you're really not, and it's not sex-positive to speak poorly of polyamorous people simply because it didn't work for you.

Not to mention, some people don't even have sexual desires, and there is nothing wrong with that either. Asexuality is a frequently ignored orientation wherein a person does not experience sexual desires. Rachel White writes, “Sex positivity has long been about 'owning our desires' but it should also be about owning our lack of desire, which is totally OK."

In the episode, “Do You Sext?," Allison and Gaby interview stand-up comedian Melissa Villaseñor while she impersonates Julie Andrews. They ask Julie Andrews if she has ever sent sexy text messages, and she responds with explicit and bizarre sexcapades. This upsets Allison, who becomes visibly frustrated, shouting, "No! That's not possible!" Gaby responds by explaining that Julie Andrews isn't prim and proper Mary Poppins all the time, but rather "a complex sexual being."

While this idea is introduced through a joke, it is extremely important. Sex-positivity challenges the Madonna-whore complex, which sets up the dichotomy that women are either sluts or virgins — and that's it. It's why, for example, society shames mothers for embracing their sexuality instead of letting it wither away and die. Sex-positivity acknowledges that women are complex and three-dimensional, and that we can have sexual desires while maintaining all other aspects of our personhood.Dunn describes how her openness about her sex life has led to assumptions about her character. She says that people "have to realize I'm a complex person... I believe in what I believe in very strongly, but I'm not a monster who doesn't respect other people's boundaries."

When advising how to handle unwanted advances in public places, Gaby and Allison comically recommend aggressive tactics. While it's definitely funny, it's also pretty good advice. No, you don't want to bite off every dude's head for no reason, but if you're not interested in a guy and he won't leave you alone, why not tell him to eff off. And if a guy argues that you must want his attention because of the tightness of your jeans (because you'd never wear clothing for yourself), then why not tell him to take a hick.

8. Don't Be Ashamed Of The "Baggage" You Bring To Relationships

Owning the complex aspects of your being, rather than being ashamed of them, is key to leading a sex-positive lifestyle complete with healthy relationship dynamics. Denying important and formative parts of your past in order to please someone else is often expected of women, and it is dangerous to our humanity. Not to mention, it downplays your amazing strength and perseverance. As Dunn says, "Honestly, everyone is f*cked up so you're going to be fine. Find your people who are f*cked up in the same way you are and then love each other and never let go."

It's OK to be single, and you're not any less of a person because of it. Sex-positivity does not demand that you have a certain relationship status or frequency of sexual activity.

10. Don't Apologize For Your Sexuality Because It Isn't Shameful

Gaby frequently discusses her bisexuality and confusing years as a queer teen on the show. In an episode called, “How Do You Date a Bi Girl?,” Gaby critiques the biphobic assumption that dating bisexual girls is somehow different from dating straight girls, and attributes it to the viewer's own issues with masculinity. Being sex-positive means that you don't feel the need to apologize for your sexuality and your personal life, especially when it is hurting literally nobody. As Raskin says, "I don't think you should be ashamed about anything other than hurting people's feelings on purpose or abusing animals."