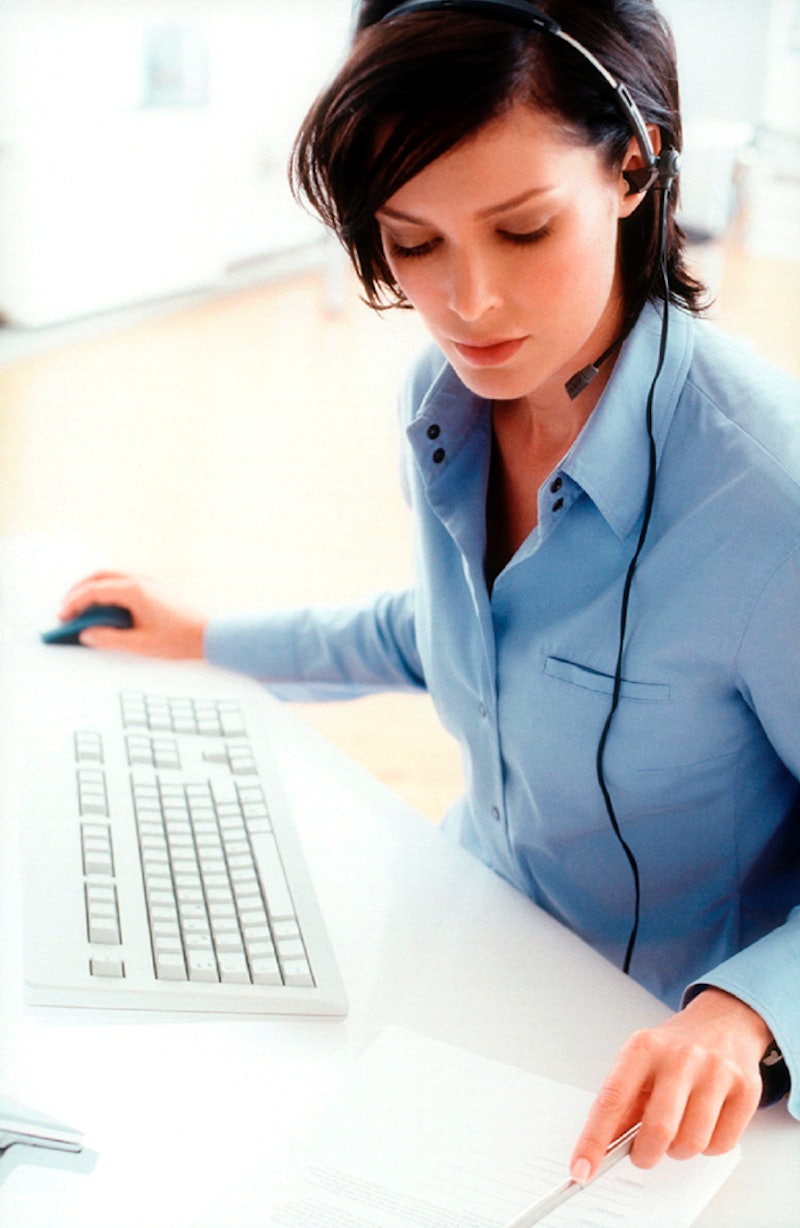 We've all heard that women say "sorry" too often, but apparently that's just the tip of the iceberg when it comes to all the ways we're doing this whole speaking thing wrong. Former Google executive Ellen Petry Leanse says women should also stop saying "just" all the time, too. Does she have a point? Probably, but I'm still not that thrilled with this trend of critiquing the ways women choose to express ourselves. But maybe I'm just too attached to my qualifiers.

In a LinkedIn post that was reprinted in Business Insider, the former executive explains what she has against this seemingly innocent four letter word. She writes that she first noticed the word after leaving Google for a company with a higher percentage of female employees (which isn't hard), and observed that women used "just" a lot more — "I was just thinking..." "I just wanted to say..." "I just thought I'd check..."

And it didn't sit well with her.

It hit me that there was something about the word I didn't like. It was a "permission" word, in a way — a warm-up to a request, an apology for interrupting, a shy knock on a door before asking "Can I get something I need from you?"

The more I thought about it, the more I realized that it was a "child" word, to riff Transactional Analysis. As such it put the conversation partner into the "parent" position, granting them more authority and control. And that "just" didn't make sense.

I am all about respectful communication. Yet I began to notice that "just" wasn't about being polite: it was a subtle message of subordination, of deference. Sometimes it was self-effacing. Sometimes even duplicitous. As I started really listening, I realized that striking it from a phrase almost always clarified and strengthened the message.

And she definitely has a point.

Using the word "just" minimizes a person's message unnecessarily, and is almost certainly a symptom of women not feeling justified in presenting ideas, making suggestions, or generally taking up metaphoric and literal space. But see, that's the thing: the word is a symptom. And so even though I agree with Leanse that the way the word is overused by women represents a problem, I find myself getting irked as she encourages women to "[take] the word out of your sentences," and "find clearer, more confident ways of making your ideas known." Because the real solution here isn't to tell women we need to monitor our language all the time.

In an ideal world, women wouldn't need to use qualifying language more than men. In an ideal world, women and men would be equally likely to feel confident, and gender would not be a factor in how assertive or self-assured someone was. But telling women we need to change our language patterns isn't going to get us to that world. It might benefit some women, or trip up still more, but ultimately it won't address any of the underlying problems.

The reason women are held back in business isn't because we're stupidly speaking the wrong way. If our speech patterns have anything to do with it, I'd argue that the real problem is that women's modes of expression are undervalued and cause women to be taken less seriously unnecessarily. After all, couldn't you argue that men aren't saying "just" enough, and therefore are exhibiting an unhealthy lack of humility? Why do we frame linguistic differences between men and women as problems for women?

And do we really believe that if women learn to mimic male modes of speaking, no matter how much more natural our own might be, that we will somehow be treated as equals?

So if you want to cut out the word "just" as a qualifier from your language, go for it. Leanse has a lot of excellent points about why the word is a problem, and not using it might come with some great upsides. But if you don't want to go through the awkward process of changing how you speak, you shouldn't have to do that, either. And either way, I think we can all agree that this delightful trend of policing women's language is getting kind of old.

More like this
Here’s Your Daily Horoscope For August 8, 2022
By Mecca Woods
TikTok’s #NapkinChallenge Is The Chaotic Good You’ve Been Missing
By Sophia Moore
15 Genius Storage Solutions For Your Next Bathroom Refresh
By Emma Garza
Your Guide To Embracing The August Full Moon
By Brittany Beringer
Get Even More From Bustle — Sign Up For The Newsletter