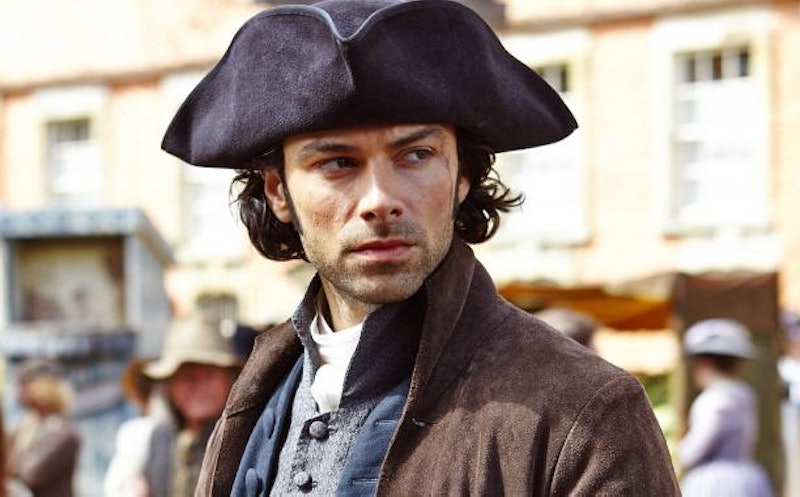 Excuse me for a moment while I go all Barney Stinson on you, but have you met Poldark ? The British import is currently steaming up Sunday nights on PBS' Masterpiece Theater (catch it at 9/8c, guys) and it is the greatest thing I have ever seen. OK, so I know in my mind that I'm being a tad bit hyperbolic, but try telling that to my emotions. The period drama (adapted from a book series and '70s era miniseries mega-hit) follows the journey of Ross Poldark, a breathtakingly handsome red coat recently back from the Revolutionary War. He returns to his Cornwall home to find out his father has died and the woman he loves is marrying his cousin. Heartbroken and penniless, he turns to working his father's decrepit farm while trying to find enough backers to reopen the family's mine.

Did that hook you? No? Then let me tell you about Demelza, a miner's daughter who leaves her abusive family and ends up working in Poldark's home. She is a total badass: she's sarcastic, always a little angry, loves her dog ferociously, and is not afraid to get her hands dirty. I don't need to be a psychic to tell you she and Poldark are destined, but watching their courtship is half the fun.

Poldark is crazy addictive, so addictive I barely noticed it was stealing my heart until it was too late. I want you to go in with your eyes open though. Here are 11 signs Poldark is taking over your life (it's OK, let it happen):

1. You Feel An Overwhelming Urge To Make Aidan Turner's Face Your Background On All Electronics

Aidan Turner has quite the face, so it is perfectly normal to want to turn on your phone and see his gorgeous eyes staring back at you. It's regular celebrity crush stuff. And OK, so you picked a photo where he's in character as Poldark and not say Kili from The Hobbit or Mitchell from Being Human. It's just the period piece clothing that's doing you in.

I'm sorry Uncle Charles, but you sir, are the worst. I know your son is kind of a coward, but that is so not Poldark's problem, dude. I don't have time for your machinations.

3. You Start Fantasizing About Moving To Cornwall, Circa The 1770s

The vistas are so drool-worthy on this show they short-circuit my brain. I know no one has figured out the whole time travel thing yet, but when they do I want to go horseback-riding along the Cornwall seashore.

4. You Start Asking Yourself "What Would Demelza Do?" On The Daily

When faced with rude people or an unsavory task — Ugh, I have to dust again? — I now find myself asking how Demelza would react and the answer is always with sass and drive. She's owns chores and always tells it like it is. I want to be more like Demelza.

5. The Need To See Demelza And Poldark Smoosh Their Faces Together Becomes All-Consuming

I wish I could say I only think about them making out when the show is actually on, but that would be a lie. A really, really big lie.

6. You Start To Feel Bad For Elizabeth

At first, I didn't have strong feelings about Poldark's first love, Elizabeth. She's awesome in her own right though. She's friends with Verity, she's kind, and she only ended up marrying Francis because she thought Poldark was dead. Granted, I don't want her to rekindle her romance with Poldark, but I don't want to see her stuck with Francis either — he is so the British equivalent of Gone With the Wind's Ashley.

7. Mining Becomes A Topic You Feel Passionate About

This mining stuff is serious business. Poldark is trying to resurrect an entire economic system on his own. Granted, the intricacies of the plot are hard to follow, but Poldark is concerned so I am too.

8. You Stop Responding To Texts On Sunday Nights

I'm sorry, but whatever crises my friends are having on Sunday night are not as important as what is happening on my TV screen.

9. Everything Poldark-related Makes You Emotional

Watching Poldark with me is not for the easily startled. I verbally hiss at the screen when that good-for-nothing banker George shows up, and I burst into tears every time Demelza snuggles up with her pup on the hearth. I have lost all control over my emotions and I don't even care.

10. You Both Avoid And Seek Out Spoilers At The Same Time

Knowing all of Britain knows what happens this season is simultaneously thrilling and terrifying. I Google spoilers and then immediately cover my eyes like Medusa just came around the corner. It's a problem.

11. You Can't Stop Talking About Poldark

What do you mean there's other TV? There is only Poldark with the romance and the drama and the flowing hair. Seriously, unless you want to talk about potential Poldark and Demelza kissage, I just cannot focus on what you are saying to me right now.

I want to say my Poldark love is a problem, but if it is, then it's the best problem ever.

Note: A previous version of this article said Ross Poldark was back from the Civil War, when in fact he has returned from the Revolutionary War.