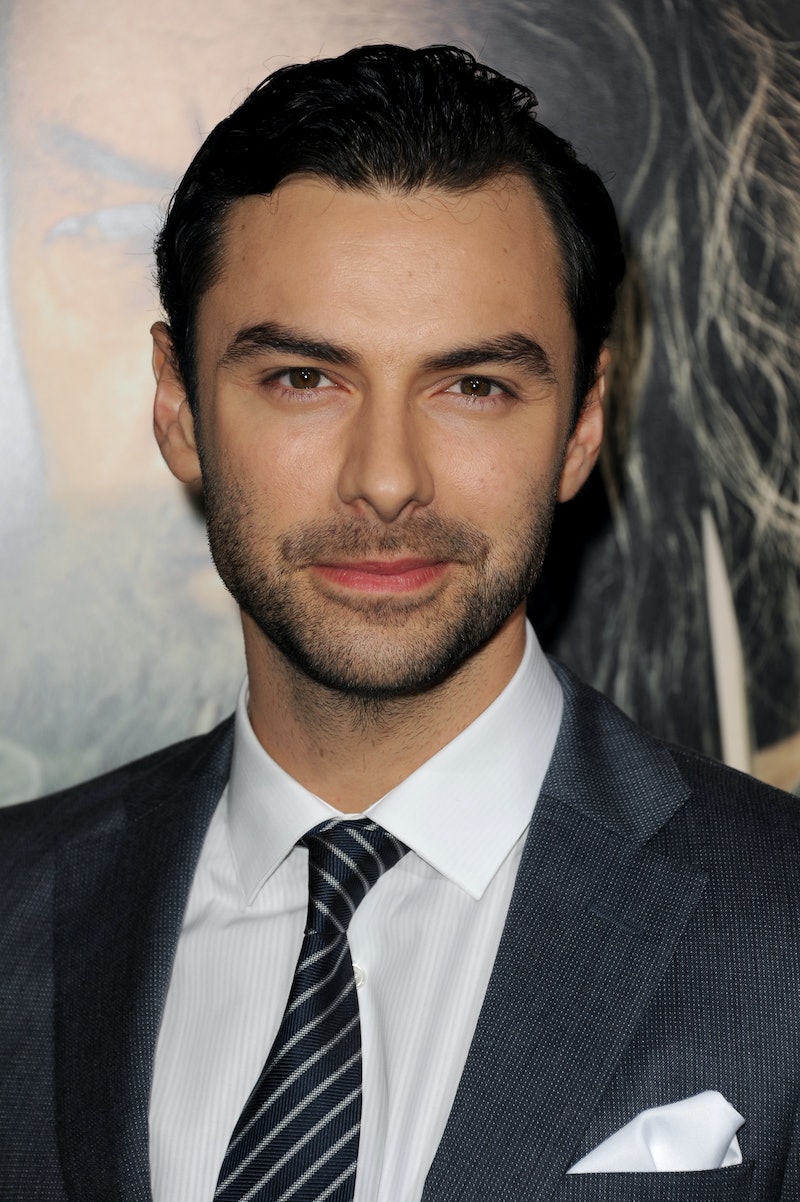 Every epic fantasy adventure series need a brooding hunk to make all the darkness, dreariness, and dirtiness a little more palatable. I know for certain my love of fantasy wouldn't be half as intense as it is now if it weren't for the moment laid my young eyes on Orlando Bloom as the dreamy Legolas or Kit Harington as the forever sad Jon Snow. I admit, I wasn't too much of a fan of The Hobbit series when it came out, but when you add a long-haired, scruffy Irish man to the mix, my feelings are bound to change. Aidan Turner plays Kili, aka the hottest dwarf in Middle Earth, so it wasn't long before I started wondering: is Aidan Turner single?

Of course, this is obviously the most important question I had before the release of the third and final installation of The Hobbit series, The Hobbit: The Battle of the Five Armies, on Dec. 17. I need to prepare my wandering eye for heartbreak or hope, which really won't amount to anything, but a girl is allowed to dream, right?

Well, after some extensive Internet sleuthing it seems like Turner is a serial monogamist, and has only really had two serious relationships — publicly anyway.

His first public relationship as an up-and-coming Irish actor was with fellow Irish actress Charlene McKenna, whom he dated for two years until 2009, after they met on set of the film, Porcelain. Prior to their breakup, McKenna said she was very open about her relationship with Turner, but after they went separate ways, being heartbroken in the public eye proved too tough to bear. She told Independent.ie, "As I've got older, I know what's really precious. Would you want people knowing about your relationships and your break-ups? It makes it so much worse." Perhaps this attitude rubbed off on Turner?

Following his breakup with McKenna, the only other woman mentioned is Sarah Greene, who has been labelled as Turner's girlfriend since September 2014. Who is Sarah Greene? Well, looks like Aidan Turner snatched himself a gorgeous a talented fellow Irish actress, who was recently nominated for a Best Actress Tony Award this summer! Not too shabby.

Although they are both in the spotlight, the couple has kept many details of their relationship private which is surely a breath of fresh air. One can assume that they either had met or knew each other while in college, as they both attended Gaiety School of Acting in Dublin, where Turner graduated in 2004 and Greene in 2006. One of the earlier mentions I found of their relationship was in 2012, when the Independent reported that Turner had arrived to the premiere of The Hobbit with his theatre actress girlfriend, Sarah Greene.

In August of this year, Greene was announced to have been featured in the coveted September Issue of Vogue magazine, a big step for a new actress. With her star rising now along her boyfriends, she has shared the downfalls of becoming more popular in the pubic eye. Greene spoke to the Sunday Times Culture magazine saying, "I have a private life and I want that to be private. I look at Daniel Radcliffe and think that is now something I would like. My boyfriend was on the Tube and people started taking pictures of him asleep. It’s like, ‘Ask for a photo if you want a photo.’ Everyone is paparazzi these days.”

Although the pitfalls may be tough, these two seem like down-to-earth people who love and support one another, and have been there since the beginning. All in all, bravo on them snagging each other and let's hope these two talented kids can make it!