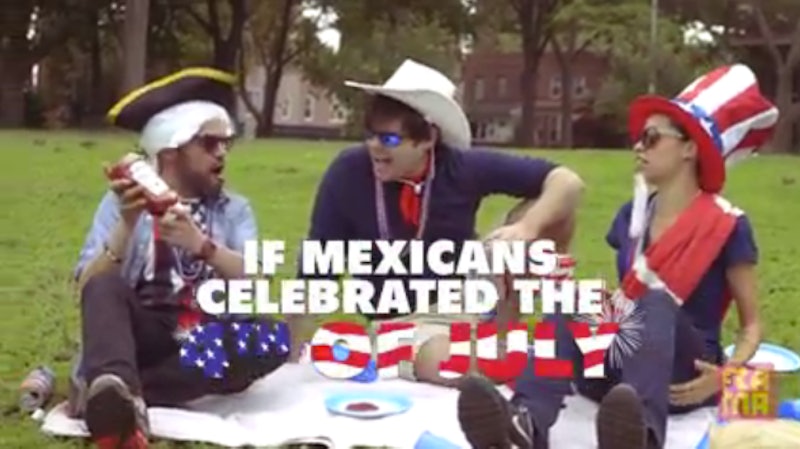 Sometimes, Americans appropriate other cultures' customs in offensive ways without realizing it. To help us take an honest look at ourselves, FLAMA's "If Mexicans Celebrated the 4th Like Americans Celebrate Cinco De Mayo" video takes advantage of today's holiday to critique Americans' problematic celebrations of another holiday: Cinco de Mayo.

Americans often view Cinco de Mayo as analogous to the Fourth of July, but it's actually not Mexico's Independence Day. Instead, it celebrates Mexico's later victory in the Battle of Puebla against the French, who occupied Mexico in 1862, the year the battle took place, and vacated the capital in 1867. (You're welcome for the little history lesson.) This is what the holiday means in Mexico, but to Americans, it's often a day of Margaritas, tacos, and debauchery.

While the analogy between the two holidays may not make sense, it does become funny when we consider how Mexicans might celebrate the Fourth of July if they practiced the kind of cultural appropriation Americans do — and FLAMA's "If Mexicans Celebrated the 4th Like Americans Celebrate Cinco De Mayo" video brings this hypothetical to life.

Here are some activities from the video that might be taking place in Mexico today (I assume the video refers to Mexicans in Mexico, because opposing Mexican Americans to Americans would just be silly) if other cultures treated us the way we treat them.

Who knows that this holiday is actually about? Most importantly, it's an excuse to get wasted. (Actually, I think some Americans view the Fourth of July this way as well.)

2. They'd "put some traditional ketchup on everything."

Because ketchup is so exotic. Also, ew.

3. Americans would find the celebration "so offensive."

And we'd be getting a taste of our own medicine.

Americans love when you pay homage to them with their cute little Yankee Doodle caps.

Along with fresh-squeezed Natty Light, imported all the way from the United States of America, they'd enjoy the American delicacies "Four Loko of July" and "Fourth of Ju-wine."

And they'd look like the morons we probably look like doing Mexican folk dances, or worse, some other Latin American dance we mistake as Mexican.

7. They'd reference the "Battle of Fourth of July" and place it in a sequence of unrelated battles, one of which is from Game of Thrones.

This segment shows a Mexican projecting his history onto Americans, the way we think of Cinco de Mayo as Mexican Independence Day, while describing the relevant historical events with gross inaccuracies. Best line: "A bunch of British people, like, threw tea over, and so it, like, stained the river, and so that's when they were like, 'Oh, awesome, we have a tea river so let's free the slaves.'"

Which is to say, they would sing a mashup of "Take Me Out to the Ball Game" and "Material Girl."

9. They'd wish Canadians a happy Fourth of July since we "all look the same."

Your countries have entirely different histories, but you have the same skin color, so...

So maybe, when Cinco de Mayo rolls around next year, think about what you're celebrating before you jump on the partying bandwagon. A lot of us could probably stand to do that today, too.