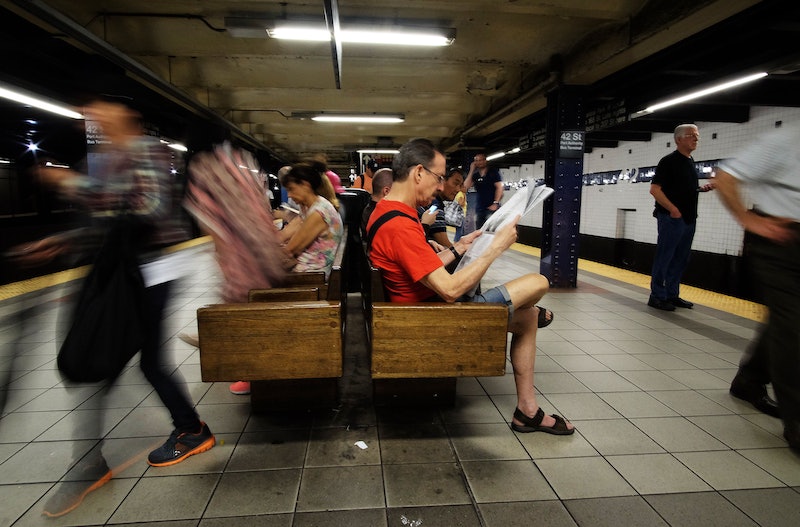 Remember that gross body shaming Protein World ad that asked passersby if they were "beach body ready"? Well feminists have defaced it, flipped it off, made fun of it, created body positive ad campaigns to fire back at it, and stripped down in the tube station to pose next to it in their bathing suits. Refinery 29 caught up with blogger Fiona Longmuir, one of the activists who took to a Charing Cross subway platform in London alongside Tara Costello to show the brand that all she needed to have a beach body was her body and a bikini.

Longmuir said she'd been longing to pose in her bikini with the ad, but didn't know where to find one of the full-size ones. "When Tara posted the photo of her giving one of them the finger, I'd tweeted her to ask where it was. The next day, we were standing in the middle of a crowded Charing Cross station in our bikinis!" she told Refinery 29. Hey: two feminists are better than one, right? The duo had never met before stripping down together, but they became fast friends and coordinated a bikini protest in Hyde Park together shortly after.

Unsurprisingly, the duo faced their fair share of backlash and terrible body shaming comments following the actions. Longsmuir says she thinks it's not the message, but the fact that her and Costello are women that made people upset. "It's funny, I didn't think my message was particularly controversial: The model in the adverts looks gorgeous, but that's not the only way to be gorgeous," Longsmuir said. "So I don't think it was the message that people reacted angrily to. The negative comments seemed to follow depressingly familiar misogynistic stereotypes: that we were taking out our insecurities on other people, that we were jealous, that we were hysterical, that we were attention-seeking. Sadly, it seems like women are still expected to just keep our mouths shut."

The responses from Protein World itself, mocking the women and even their mental health, shocked Longsmuir but eventually led her to realize that they were simply trolls. This wasn't really about the brand, it was about something bigger. "To me, it was never really about Protein World," she said. "It was about offering an alternative image to the one that's pushed on us from every single billboard. Our photograph was shared all over the world, and in Take Back the Beach, we took something that was promoting self-hatred and turned it into a huge body-positive love-fest. And I think that was worth it."