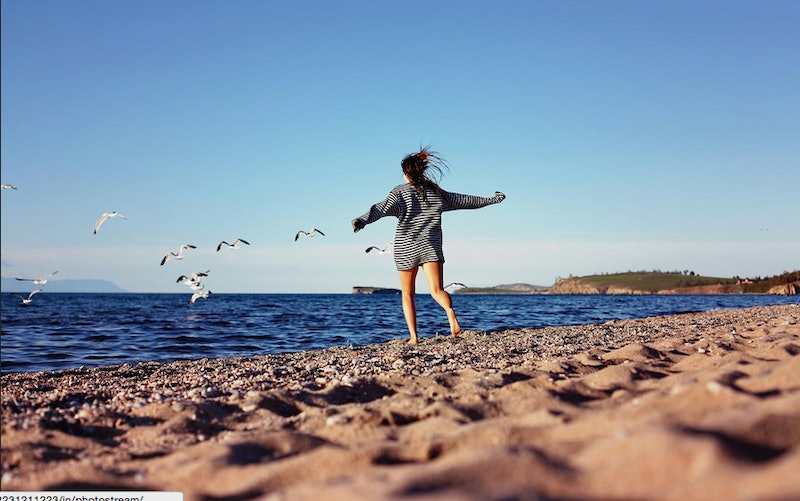 Well, it's officially ridonk o'clock, which is my semi-legit new term for what advertisers refer to as "bikini season". We should be reveling over the fact that the ground even still exists under the gigantic mound of snow we got, but instead we're all of a sudden worked up about what our bodies look like in an elastic waistband because society. I'd like to think we're moving past that era of body dissatisfaction and unrealistic expectations, and these awesome feminists defacing a "beach body" ad by Protein World are only helping further the new movement along.

If you live in the UK, you might have already seen the offensive and, quite frankly, ridiculous ad that has been spotted in tube stations. They feature an extremely skinny woman and the slogan "Are You Beach Body Ready?" to promote their new weight loss collection. While I am a huge proponent of body positivity and in no way mean to attack the model in the ad, the body that they are proposing as "beach ready" is actually an extremely unhealthy standard for a lot of women, and is psychologically damaging to perpetuate as a standard. Also, c'mon, society. We're better than this. It's 2015, yo. Let bodies be bodies and stop projecting your psychological warfare to sell your shiz.

The truth is that all bodies are "beach bodies". Literally all you have to do is transport your human self to a beach, and voilà, you've done it. And I'd worry more about this ad that Protein World put out into the world, but I've decided not to be, because the response to it has been extremely empowering and has pretty much flipped their bad message and reversed it.

And here are some of the ways feminists have taken to fixing it, promoting healthy body images and universal beach readiness:

Of course, there were the more subtle approaches, such as:

Or one of my personal favorites:

What's great is that the powerful defacement of these ads has spread like wildfire, way beyond the damaging message that they send. The only real mystery is Protein World, who has refused to back down on the ad, and is defending it to a disturbing degree.

They're also aggressively retweeting any and all support that they have gotten for the ad, and continuing to promote and defend it on social media. They've even gone so far as to mock users tweeting at them about the ad:

One particularly bad case comes from a user named Harriet Johnson, who tweeted her concern about the ad a few days ago. Since then, Protein World has not only mocked her by telling her to "grow up" and tweeting pictures of skinny models at her, but has inspired dozens of other Twitter users to tweet at her with the nonsensical hashtag #GrowUpHarriet:

Like, excuse me? What does growing up and projecting body standards on people have to do with each other? Even if Protein World's ad is defendable, is encouraging a movement to bully a Twitter user supposed to be?

And this recent thread shared by a Facebook user shows just how creepy the extent of their marketing is. Fortunately, users have managed to keep a sense of humor about it:

In the meantime, a petition has gone up online in protest of the ad, and has already garnered 45,000 of its 50,000 necessary signatures. If you're too far out of the UK to deface your own ad, you can click here to sign, which will probably be every bit as satisfying.