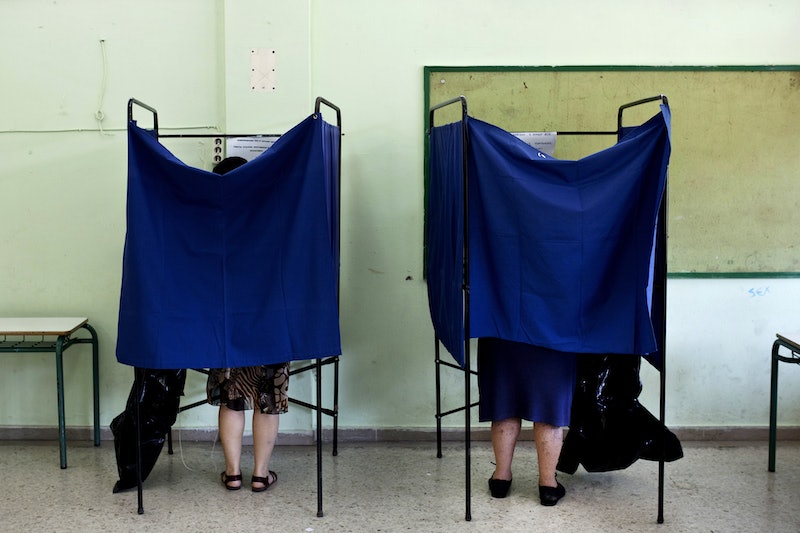 The Greek people vote Sunday to decide just how the country is going to deal with its worsening debt crisis. The referendum vote will be on whether the country should accept a bailout deal from the European Central Bank, which would include harsh austerity measures, or severe spending cuts and tax increases for the Greek government, according to NPR. Athens missed an important payment on an International Monetary Fund loan last Tuesday, so German negotiators presented a new bailout agreement to the country, which the citizens will vote on. So, what does Greece's debt crisis vote mean? Voting "yes" and taking the bailout could hurt jobless citizens more, while voting "no" could mean that the country exits the 19-country eurozone.

UPDATE: Greece has voted "no" on the bailout referendum, according to Reuters. Officials declared the "no" result when only a fifth of the votes had been counted at about 60 percent "no" and 40 percent "yes."

If the country votes "yes" to taking the bailout, then its three creditors — the International Monetary Fund, the European Central Bank, and the European Commission — will set tough austerity measures like tax hikes for Greek citizens, according to the International Business Times. Greek Finance Minister Yanis Varoufakis said he would resign if the country accepted the bailout. If the bailout is supported, the IB Times said the action would show that the Greek people have lost faith in Prime Minister Alexis Tsipras. Saying "yes" to the bailout would also mean that Greece remains a part of the European Union that uses the euro as its national currency.

If the country votes "no" to the bailout, it would mostly mean that they don't want to succumb to the austerity measures set by Greece's creditors. Tsipras, who is asking citizens to vote against the bailout, told people that rejecting the bailout as written would allow him to sit down with the creditors and try to negotiate from a stronger position. So, simply put, rejecting the current bailout doesn't mean Greece wouldn't get a bailout; rather, it would just mean that it might not get a bailout with such restrictive spending limits or high tax increases, according to the IB Times. Unfortunately, the creditors have said they would be unwilling to renegotiate the deal if it's rejected by Greek citizens. If they won't renegotiate and Greece does reject the bailout, then the country could exit the eurozone.

A "Grexit" from the eurozone seems a bit more likely given early polling data. But it wouldn't be a great solution. The country wouldn't be able to immediately return to its former currency, the drachma, so it wouldn't have a bailout deal or money, which means it would just default on more loan repayments, according to the Associated Press. Even worse, without some kind of bailout deal, the government wouldn't be able to pay salaries or pensions. In a short amount of time, banks could run dry. If that happened, the only available option would be to print a new currency, but the AP said that most economists and government officials think that would "be a short-term disaster for the Greek economy." Eleni Deligainni, who lives in Athens, told Reuters that she voted "No" to the referendum, according to NPR: "I have been jobless for nearly four years and was telling myself to be patient ... but we've had enough deprivation and unemployment."

A Friday Bloomberg News poll that surveyed 1,042 Greeks showed that 43 percent of responders were planning to vote "no," and 42.5 percent were going to vote "yes," according to the IB Times. As this article was published, "no" voters had the lead, according to Business Insider.