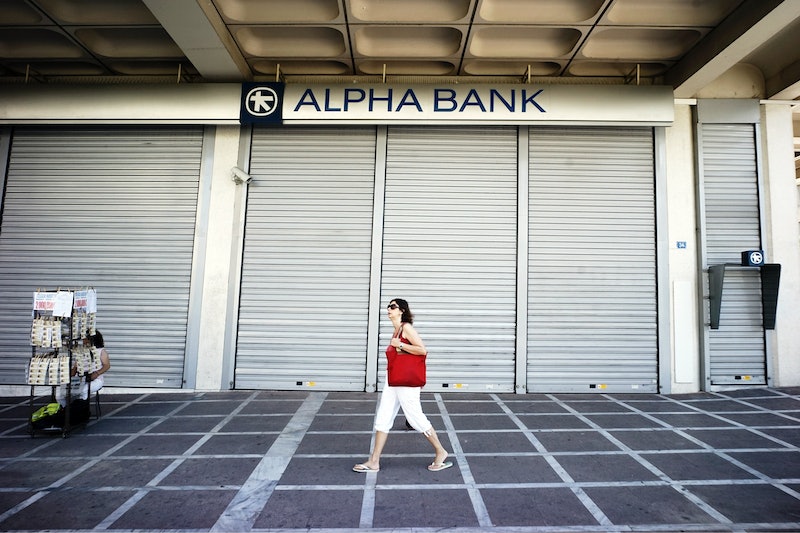 Following failed negotiations with creditors, Greece closed all of its banks on Monday as the country steers into another financial crisis. Greek Prime Minister Alexis Tsipras made the announcement in a videotaped statement broadcast Sunday night. Tsipras placed much of the blame on the Eurogroup, the coalition of financial ministers from European Union states that denied Greece's request for an extension of a loan program that was reportedly keeping the Greek economy afloat for weeks.

Greece's growing financial troubles reached its boiling point when Europe's financial ministers met over the weekend to discuss the country's debt and possible bailout. The Greek government wanted an extension on its loan program, which expires June 30, so it could hold a nationwide vote on reform and bailout proposals on July 5. Now, all banks in Greece will now remain closed until July 7.

"The Eurogroup's decision prompted the European Central Bank to not increase liquidity to Greek banks, and forced the Bank of Greece to recommend that banks remain closed," Tsipras said Sunday. The prime minister added that this move by the Eurogroup and ECB was an "attempt to blackmail the will of the Greek people" and block the nation's "democratic process." It seems Tsipras believes this was a threat, forcing Greece to stay in the European Union.

"They will not succeed," Tsipras continued. "[These decisions] will further strengthen the resolve of the Greek people to reject ... the institution's ultimatums."

The prime minister added the Eurogroup's decision was "an insult" to Europe and its "democratic traditions." He is again asking for a short extension on its loan from the European Central Bank as Greece braces for another financial crisis, and a possible exit from the euro currency.

On Sunday night and early Monday morning, hundreds of Greek residents flocked to the banks, hoping to withdraw their pensions and other funds. For the next week, Greek residents can only withdraw 60 euros — about $67 American dollars — a day from ATMs.

The new, strict restrictions imposed on Greece this week are meant to stem withdrawals from the banks, but that could cause problems for the nation's elderly population. According to the Associated Press, many older Greek residents don't have bank cards, so they typically withdraw their pensions in person; with the banks closed, these residents won't have any access to their money.

"I don't have a card, I don't know what's going on, we don't even have enough money to buy bread," 74-year-old resident Anastasios Gevelidis told the AP as he waited outside a bank in Thessaloniki. "A bank employee came out at 8 a.m. and told us 'you're not going to get any money,' but we're hearing that 70 branches will open."

Others lined up outside bank branches to see if they could get their hands on their limited funds from ATMs. Credit cards can still be used in the country, but many stores have said they won't be making credit card transactions over the next week. Electronic transactions, such as bill payments, can still be made. The prime minister also stressed that his citizens' deposits and funds are secure.

However, Greek Financial Minister Yanis Varoufakis said in a statement on Sunday that the upcoming referendum on the bailout proposals is not a vote on the euro or Greece's place in the EU. Varoufakis explained:

To those who say that, effectively, this is a referendum on the euro, my answer is: You may very well say this but I shall not comment. This is your judgement, your opinion, your interpretation. Not ours! There is a logic to your view but only if there is an implicit threat that a No from the Greek people to the institutions’ proposal will be followed up by moves to eject Greece, illegally, out of the euro. Such a threat would not be consistent with basic principles of European democratic governance and European Law.

But many European leaders don't see it that way. "If the euro fails, Europe will fail," German Chancellor Angela Merkel said in a speech in Berlin on Monday. "That's why we have to fight for these principles. We could maybe set them aside in the short term. We could maybe say we’ll just give in. But I say: in the medium and long term, we will suffer damage that way."

More like this
How To Fight For Reproductive Rights, Based On How Much Time You Have
By Courtney Young
What Is Barack Obama’s Net Worth? He Makes *Way* More Now As An Ex-President
By Hugh McIntyre
President Zelensky Spoke Out On Ukraine's Chances Of Hosting Eurovision Next Year
By Sam Ramsden
The Music Industry Continues To Fail Black Women
By Precious Adesina
Get Even More From Bustle — Sign Up For The Newsletter