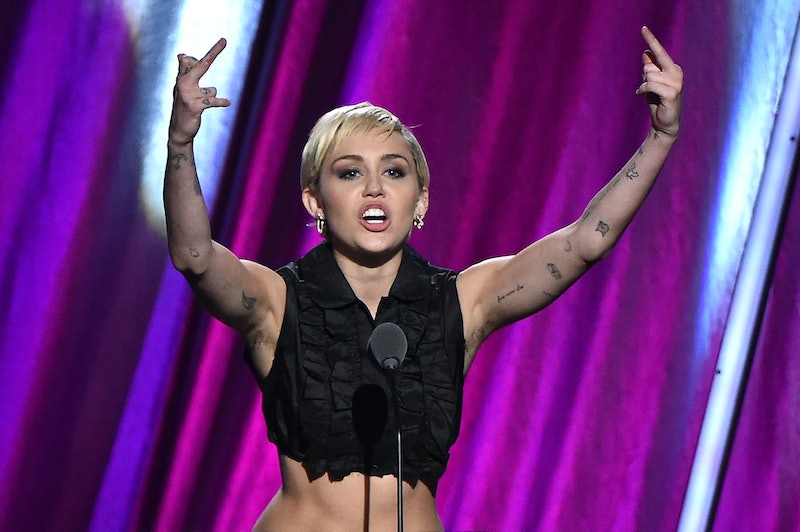 As of late, we are seeing an increasing number of feminine celebrities with body hair in the media. Bold and fearless, bathroom selfies and red carpet photos alike are being taken over by unshaven legs and colorful armpits. And this is incredibly important. As a feminine person who prefers to keep all of their hairy bits, well, hairy, it is encouraging for me to see mainstream celebrities like Miley Cyrus and Jemima Kirke showing off their unshaven armpits. Of course, feminine people are expected to keep all parts of their bodies virtually hairless, in accordance with male-dominated media and beauty companies. But there is no other part of the body that seems to stir up more controversy than The Hairy Pit.

Everyone around me easily accepts the fact that I don't shave my legs. Maybe it is partly because my legs aren't always exposed, thanks to my favorite high-waisted jeans, or because my hair is too fine to truly be able to tell that my legs are in fact unshaven. But unshaven armpits seem to be an entirely different beast altogether. Somehow, an unshaven armpit is where many people draw the line in terms of being able to accept the body hair and choices of others. The image of a feminine person lifting their arm, and exposing a bushy pit warrants shock and disapproval, as passersby whisper about what a "hippie" she is.

When I first started growing out my armpit hair, I got very mixed reactions. My mom was very hesitant at first, and kept asking me, "When's the last time you shaved?" I've gotten some inappropriate questions from friends and strangers alike, as well as the eternal glare from fellow subway passengers (which has caused me to be conscious of keeping my arms down while in transit). I did not expect all this attention to come from such a small personal choice, and try to stay confident and strong in my beliefs, despite trolls on social media and the conservative, rude people IRL.

No decision that I've made about my body that could be considered slightly alternative, such as piercings, tattoos, or dyed hair, has ever gotten as much attention as my hairy armpits. And as a result, people on the Internet had very strong reactions to when I dyed my armpit hair. They were outraged or even disgusted that I would embrace part of my body I had considered normal in such a way that I would dare to bring even more attention to it.

Recently, young feminine celebrities have been getting the same kind of backlash for their own armpit hair. When Miley Cyrus dyed her armpits pink and documented the experience on Instagram, outrage flooded the comments sections, as many people took to all forms of social media to express their distaste for the look. Similarly, when Girls star Jemima Kirke stepped out at the 2015 CFDA Fashion Awards, fashion and news publications all over condemned her choices in a number of ways. Take E! News' coverage of the event, for example:

"The GIRLS star arrived to the 2015 CFDA Fashion Awards revealing a few missed shaving sessions with her fiery Rosie Assoulin creation. And while she's yet to dye her underarm hair pink a la the "Wrecking Ball" singer (Miley Cyrus), our immediate reaction was still the same: Cringe!"

It's an obnoxiously common assumption that feminine people who have hairy armpits have simply forgotten to shave, implying poor hygiene and neglect. My hairy armpits stem from a conscious choice, and not because I don't take the time to maintain my body properly. I simply maintain it the way I want to, much like Kirke and Cyrus. It says a lot about the way our society has been conditioned to look at gender when there is such an uproarious, angry reaction (resulting in ugly comments) to a feminine person choosing not to shave their armpits. Why is my fluid idea of gender and my personal brand of femininity intimidating to you?

As a feminist, I'm a firm believer in feminine people presenting in whatever way makes them feel the most comfortable and beautiful. You don't have to shave if you don't want to! You are not offending or violating anyone's personal spaces by doing so, despite ignorant comments that suggest otherwise. If you prefer shaving, that's great! Do that. Shaving and participating in any beauty routine that happens to coincide with gender norms does not make you less of a feminist. What makes you less of a feminist, and a decent person in general, is judging the habits of others.

In the same way that Beyoncé declared her feminist identity at the VMAs last year, feminine celebrities are doing progressive and important work in rocking hairy armpits by raising awareness of differing ideas of beauty and gender. It destigmatizes the practice as an exclusively feminist unhygenic offensive statement, and seeks to normalize the power of the personal choice. Which is all it is: a personal choice. And we all have a right to that.

Cyrus, Kirke, and others who choose to keep their armpit hair and even show it off help to drive the point home that armpit hair on feminine people is perfectly natural, acceptable, and clean. But most importantly, that it's a personal choice that has nothing to do with the opinions of others, and a choice that is incredibly inappropriate to critique.

But to the active hair haters, I say: My body is my own, and your opinions on how I should maintain it, as well as your assumptions about gender, are not helpful or impactful to me. And I have some beloved ladies in the music world, on the big screens, and on the small screens backing me up.