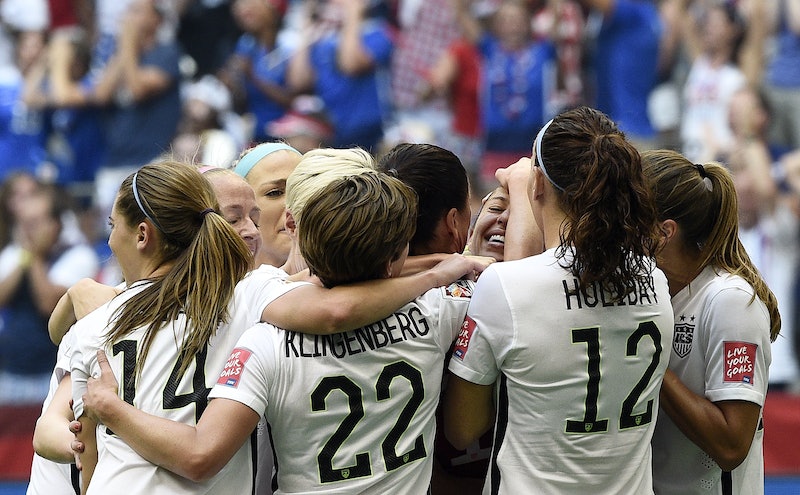 We know everybody's truly about an event when the Internet starts producing memes about it. And as much as we love to see a new version of the Willy Wonka meme with another sarcastic jab, there are some web creations that are just not entertaining, no matter how we look at it. From sexist comments to racist images, there are enough offensive creations to collect the most offensive memes of the Women's FIFA World Cup. From images showing women's bodies being objectified (ugh) to even more idiotic misogyny, there are way too many anti-women's World Cup images out there.

In a year where much of the sports-watching world is focused on an international women's soccer tournament, it's especially prudent to watch for the kind of offensive stuff that ends up on memes. And, as the NYC Metropolitan Transport Authority says, "If you see something, say something." And unfortunately, after a full year of games, there is plenty to see and plenty to say — plenty that wasn't said about the men's World Cup, no less. Let's take a look at some of the memes we will have the pleasure of un-seeing after the close of this year's World Cup. Get ready to add some more website names to your Internet hit list.

The Meme That Kind Of Just Forgets About Soccer

This one is actually from last year's FIFA World Cup, where obviously it makes sense to use women to represent each country. Because there are no team photos, or you know, any other representation that we could use as symbols of each team. Like, oh, say, a flag? Women and their unique body types don't represent an entire country. OK. Angry feminist rant coming on. Let's move forward.

The Meme With The Blatant Sexism

Oh, OK. This is nice. Let's use an old favorite YouTube video to insert a message that has nothing to do with the World Cup, women in sports, or women's ability to play sports. Way to go, Internet. But, uh, there's a game playing, in case you get bored of being sexist and want to see how real athletes play soccer.

The Meme That Ignores The Fact That Women's Sports Are Entertaining

Aw, no more Premiere League soccer? So, there hasn't been any regular programming of sportsball featuring sweaty, grunting dudes running kicking around a sphere for the past month? That's sad. Actually, no. It's not sad at all. Because women are amazing athletes and also... what? The U.S. women's team just won a major world championship. Right. That little thing. It's not like anyone took home a giant award or anything.

Senseless sexism: existent; an unnecessary feature of our society that women have to deal with on a day-to-day basis. Pointless because women are bad-ass athletes, humans.

The Meme With A Pretty Messed Up Sense Of Humor

Wanna hear a joke? Someone actually spent time creating this meme. No, this is not a prank. Someone actually sat down, thought "I want to make a meme about how women can't actually play soccer, and someone isn't going to find it and point out its blatant tone of misogyny."

Alright, that's enough of this negative energy. We've got a victory to celebrate!