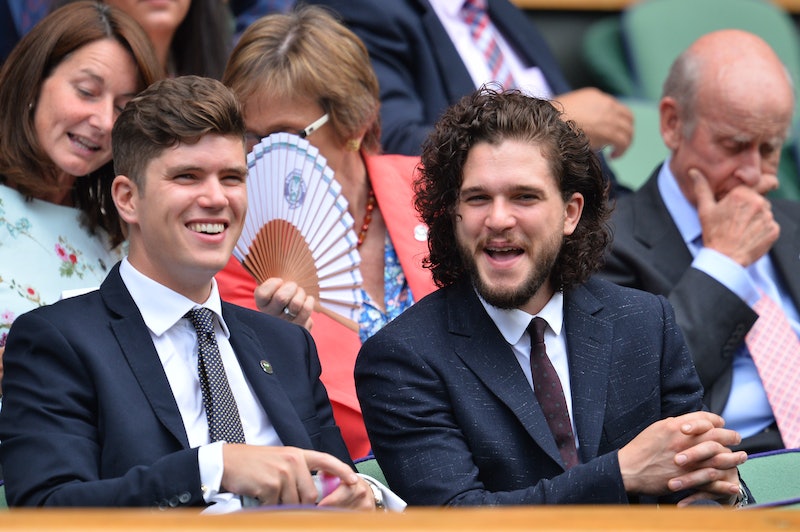 I can't believe I'm about to do this to you again, but I know you want to hear a new, hair-cut based reason why I think Jon Snow is coming back to Game of Thrones ? We've looked to the books by George R.R. Martin for clues that Jon Snow might be resurrected, and found plenty of proof there, as well as looked for symbolism in the last few episodes of the show, but now it's time to stop messing around and go to the source itself — Kit Harington. Harington is, of course, the actor who plays (or played!) the character Jon Snow, and he's been adamant in interviews that Harington isn't returning for future Game of Thrones seasons after he bled out in the snow during the finale. But, instead of believing the words that come out of his mouth, since that's too easy, I'd rather mine his personal appearance for clues, so that's what I'm doing. Harington showed up at Wimbledon with those long, Jon Snow locks intact.

As in, not cut! As in, still looks like his character, should he need to play him again when he comes back from the dead hint hint hint! I know this kind of speculation is pretty much all I've been doing since that character died in the Season 5 finale, but I really feel like, if I stop, I'll go crazy waiting for Season 6. So cut me some slack, here. And, for all of you thinking that this doesn't matter, and I'm crazy to think that this is proof Jon Snow is returning, here are seven pieces of evidences showing that it does, and I'm not.

1. Kit Harington Has Had The Same Hair For Years Now

If your character on a show had long hair and a beard, wouldn't you cut it the moment you got killed off? Like go straight from the set to a barber? Do not pass Wimbledon, do not collect $200? I know I would.

2. He Cut It As Soon As He Could The Last Time He Had An Opportunity

Harington has always complained about not being able to mess with his hair during the show, and many people felt he spoiled his own imminent death when he cut his hair after the Season 5 finale last year. So this dude knows that hair = spoilers, and he's still gonna sit there watching tennis with that mop like it's no big deal? I know something, Jon Snow...

Yo, and, of all the seasons to have long hair by choice, we're going with summer? Yeah right.

4. He Wouldn't Want To Be Pigeonholed

Even if Harington was done with the show, and even if he did like his hair long, if he was gonna be moving on to other projects and didn't want to be pigeon-holed into one category for the rest of his career, a shave and a haircut would only make sense. It's like how Dan Stevens left Downton Abbey and immediately did a whole series of roles that couldn't be more different from Matthew Crawley, just to (try to) wash that taste out of our mouths. Unless he wants to play characters like the Bastard of Winterfell for the rest of his days, I would've expected him to clean up a little, maybe get some clean-shaven head shots. You know the drill.

5. His Contract Goes Through Season 7

Oh right, and there's that. Let's not forget the actual concrete, non-haircut-based evidence.

6. He Could've Shaved At Least

You're gonna tell me your face likes that patchy summer beard? Uh huh, sure.

That might not sound like a great reason at face value, but come on, Kit Harington. We need this. In case you couldn't tell, the Game of Thrones fandom still isn't over your on-screen death. You've got to throw us a bone here, or we'll be clinging to things like your refusal to get a hair cut until the end of days. And no one wants that.