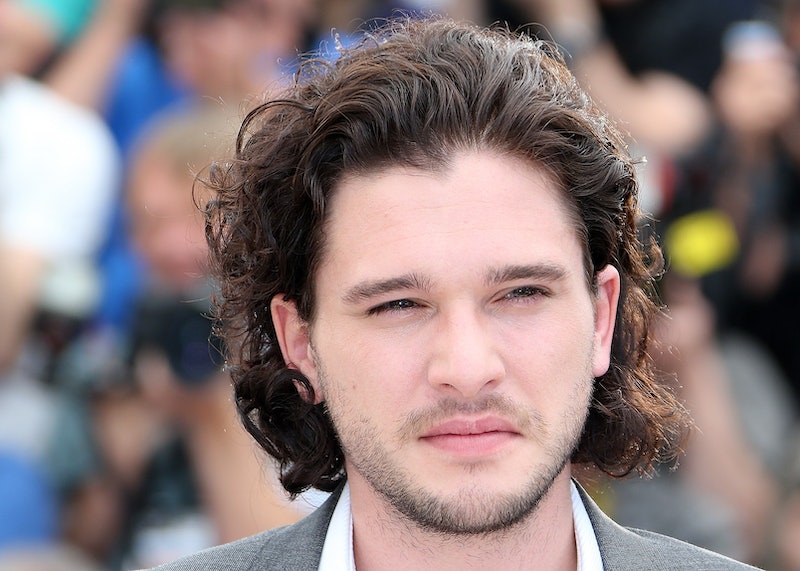 Ugh. If you watched Sunday's Game of Thrones finale then you know the sad truth: Jon Snow was stabbed (by his own men no less), and is most likely dead. I wanted to believe that he was maybe not dead, but then Kit Harington dashed all my hopes. In an interview with Entertainment Weekly, Game of Thrones actor Kit Harington said Jon Snow is definitely dead. Or, at least, he was told Jon Snow is dead, which could be an important distinction.

I'm in denial when it comes to Jon Snow's death, but even as final as Harington's words seem, it also sounds like he's hedging his bets. When asked if Jon was really dead, Harington explained to the magazine where he sits on things.

This is my understanding of it. I had a sit-down with [showrunners] Dan and David, we did the Tony Soprano walk [letting an actor know they’re being whacked]. And they said, “Look, you’re gone, it’s done.” ... Quite honestly, I have never been told the future of things in this show, but this is the one time I have. They sat me down and said, “This is how it is.” If anything in the future is not like that, then I don’t know about it — it’s only in David and Dan and [author] George’s heads. But I’ve been told I’m dead. I’m dead. I’m not coming back next season. So that’s all I can tell you, really.

At first glance, that's a pretty depressing quote and it makes it seem like Jon is gone for good. But, I do think it holds a little hope. For one, Harington made an effort to point out that he was told Jon was dead. I can think of another really good example of an actor being lied to about a death: Janel Parrish from Pretty Little Liars. To avoid having the secret leaked that Mona wasn't dead, the writer lied and told Parrish that her character was gone until filming started up again. Pretty sneaky. Perhaps the same is being done with Harington. Additionally, he simply said, "I'm not coming back next season." We do know that Harington's contract originally ran through Season 7. So, perhaps Jon will take a Bran Stark-like respite from the show for Season 6, only to be back for Season 7.

The idea of him being gone for a whole season doesn't appeal to me, but it is a lot better than him being dead forever. Sorry, Harington, I know you're in the know and all that, but I'm going to poke as many holes in this "Jon Snow is dead" thing as I can. Heck, I'll even forgive The Red Woman if she resurrects him. Basically, it's not over until it's really, really confirmed for 100 percent certain that it's over. And, even then, I'm probably not going to believe it. Long live Jon Snow and my particular brand of denial.