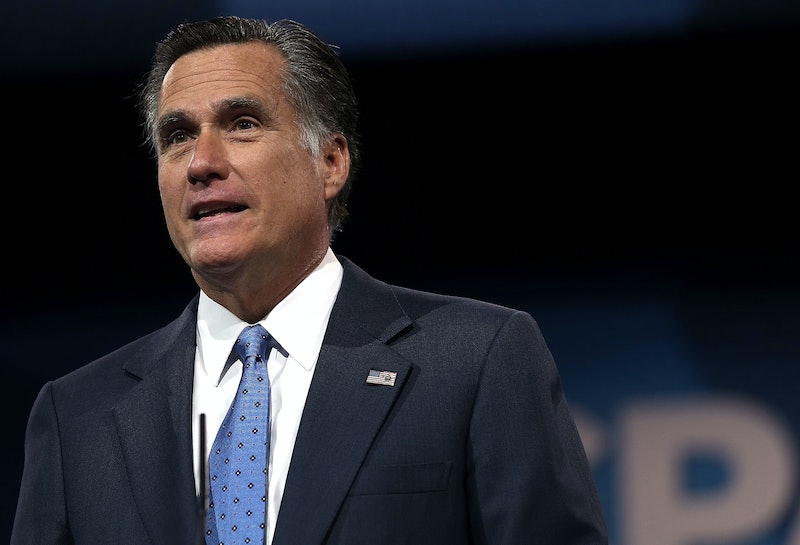 Revealing that he is essentially a 13-year-old girl at heart, Mitt Romney hosted a sleepover for Chris Christie and Marco Rubio and their families, according to The New York Times. Romney extended his invitation to the two when he heard that they would both be campaigning in New Hampshire, where the Romney summer vacation home is located. Romney probably bought the home with the sole purpose of inviting over his Republican BFFs.

The Christie and Rubio families traveled to Wolfeboro, New Hampshire, on Friday to celebrate the Fourth of July with the Romneys. An aide to Romney disclosed information about the secret slumber party to the Associated Press, though he or she preferred to remain anonymous because it was a private event. According to The New York Times, the aide said, "Governor Romney heard that his friends Governor Christie and Senator Rubio, along with their families, would be in Wolfeboro over the July Fourth holiday weekend. He and Mrs. Romney opened their home to their friends and look forward to celebrating America’s birthday."

The New York Post reports that Christie said of the event, "I suspect there might be a little politics discussed tonight with Mitt and Ann, but me and Mary Pat, and Andrew and Sarah are really happy that Mitt and Ann invited us to stay with them tonight."

It's easy to imagine Christie and Rubio pulling up at the Romney house, sleeping bags and pillows in tow, for a night of fun. Although they are competing with each other, the largest amount of animosity was probably only the result of dipping fingers in warm water and freezing bras. Here's what probably went down at the sleepover:

Opened Up About Their Deepest Insecurities

Despite the friction between Christie and Rubio, they'd eventually open up about their deepest fears and insecurities. Except instead of worrying about getting a prom date or their changing bodies, they'd say, "You guys, I don't think I'm polling well enough in New Hampshire." "No! You totally are!"

Romney would probably dare Christie to tell the country that one of his priorities as president would be to start a moon colony. Oh wait, Republicans already did that.

Rubio and Christie would probably cower in fright as Romney said with a flashlight under his chin, "And then, to the country's horror . . . a woman became president!"

Took Embarrassing Photos Of Each Other

Christie sure would love to get a shot of Rubio wearing anything but a crisp button-down with the sleeves rolled up. Instagram is going to love that.

These guys almost definitely called up the president in the wee hours of the morning to ask how the Affordable Care Act was running. Obama, not being able to recognize them because they didn't call it Obamacare, would say that it was running pretty well. "Then you'd better go catch it!"

When making public remarks about other Republican candidates, these politicians have to be very careful. In the privacy of the Romney sleepover zone, they're free to call Donald Trump a witch-with-a-B.

Chatted About Their Celebrity Icons

Somewhere in the Romney home, there is a glossy poster of Ronald Reagan with lipstick kiss marks on it.

They were probably trying to speak to Romney's political career.

More like this
Watch Jacinda Arden’s Devastatingly Honest Resignation Speech
By Sam Ramsden
What The UK Blocking Scotland’s Gender Recognition Bill Means
By Sam Ramsden
Courteney Cox & Laura Dern Proved Their BFF Status With Matching Tattoos
By El Hunt
Man Meets Politics: ‘Boy Meets World’ Star Ben Savage Is Running For Congress
By Jake Viswanath
Get Even More From Bustle — Sign Up For The Newsletter
From hair trends to relationship advice, our daily newsletter has everything you need to sound like a person who’s on TikTok, even if you aren’t.