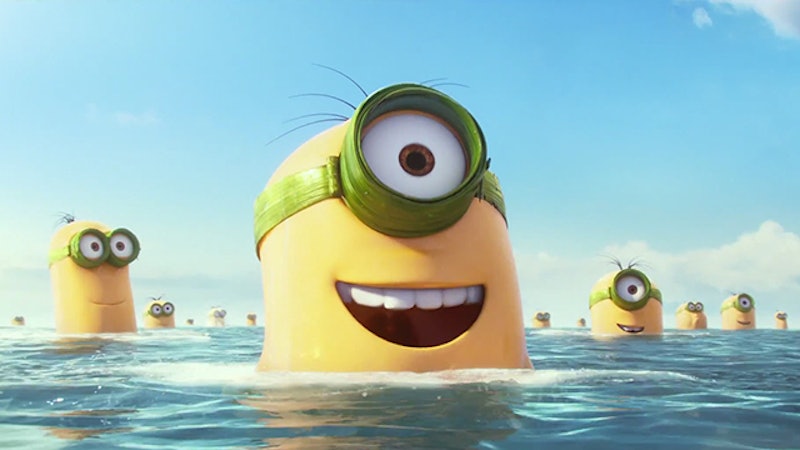 Prior to 2010, the word "minions" had a very different connotation. But in popular culture, the term is now synonymous with the small, mischievous yellow henchmen from the Despicable Me franchise. These peculiar little creatures will be returning to the big screen on July 10 in a Despicable Me prequel of which they are the main focus —aptly named Minions. But who is the voice actor for the Minions? Many people are aware of the stars who are lending their voices to the human characters in the film (Sandra Bullock and Jon Hamm, among others), but not as many people can name the voice actor behind Minions' namesake characters.

Although several individuals have contributed to the voicing of the creatures in the franchise's previous films, in Minions the voice talent will be provided solely by none other than co-director Pierre Coffin. Coffin has played at least one lead Minion in each film thus far, and now he will be giving voice to all three of Minions' yellow protagonists (as well as hundreds of other Minions who appear in the movie). But Coffin didn't originally intend to have any involvement with the voicing of these characters; it actually came about quite serendipitously.

Speaking to TrailerAddict.com, Coffin recalled how, during the early stages of production for Despicable Me, he used his own voice in an unofficial test for the Minions "just to show whoever [was] going to design the voice a way to go." Producers listened to the test and decided on the spot that Coffin was to be the voice of the Minions.

In addition to his characters' signature high-pitched voices, Coffin gave the Minions a unique gibberish dialect, according to DenofGeek.com. The filmmaker speaks multiple languages himself, and so he was able to draw from a variety of real phrases and words (and some made-up ones) to construct the Minions' trademark style of speaking. The language was mostly nonsensical in the first film, but with the second film, Coffin included words from French, Spanish, English, Italian, and... Indian cooking. He noted that, since the upcoming film reveals that the Minions have been traveling the world since the beginning of time, it would make sense that their speech would be a compilation of many languages. He has said that the emphasis is less on the words themselves and more on the melody of the words together. Coffin explained to The Hollywood Reporter, "It's about finding a particular magical rhythm and melody that makes the nonsense make sense."

It seems that this statement could be applied to the mentality of the film in general. Would anyone have guessed that there would be such excitement for a film about a league of oddly-shaped yellow beings with the sophistication of lemmings? Probably not, but some combination of the animation, the story, and Coffin's playful vocalization makes the nonsense make sense. And, yeah, we're pretty excited for it.

More like this
Lego Just Announced Its 'Black Panther' Set Release Date
By Maxine Harrison
Margot Robbie Breaks Her Silence On *That* Viral 'Barbie' Moment
By Maxine Harrison
Nicola Coughlan Shared A Lady Whistledown Excerpt From ‘Bridgerton’ Season 3
By Grace Wehniainen, Alyssa Lapid and Sam Ramsden
Everything To Know About 'The Last Of Us' TV Adaptation
By Sophie McEvoy and Radhika Menon
Get Even More From Bustle — Sign Up For The Newsletter