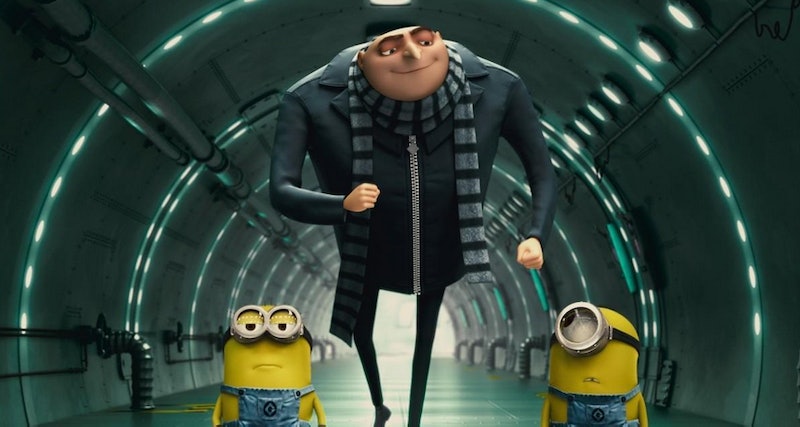 When we first met the yellow, overall-wearing Minions in Despicable Me, it was within the context of their (very willing) servitude to supervillain Gru. But the Minions quickly developed a following of their own, and the 2015 prequel Minions focuses entirely on their story. It's like when you meet someone through a mutual friend, and then you become so close with that new person that you end up excluding the person who introduced you (sorry, Karen). But just as you never really forgot about Karen (promise!), we could never totally forget about Gru and how he introduced us to the Minions in the first place. That being said, will Gru be in Minions?

The answer is yes and no, but mostly no. It's important to remember that Minions is a prequel, meaning that everything in it pre-dates the events of Despicable Me. The Minions of this film are not yet the henchmen of Gru — in fact, the trailer specifies the setting at one point as "New York, 1968- 42 Years B.G. (before Gru)." That being said, since we know that Gru was born in 1960, he was in fact alive when the events of Minions were taking place. And although a younger version of Gru does make a cameo in the prequel, he is not a relevant part of the plot. Instead, the film focuses on the history of the Minions themselves.

Despicable Me voice actor Steve Carrell addressed why Gru isn't the star of Minions, explaining to MTV, "It doesn't have to do with Gru...it's just about the Minions." The actor went on to say, however, that he had seen clips from the upcoming film, and it "looks really good." Although Carrell's hilarious portrayal of Gru will undoubtedly be missed, fans can look forward to the opportunity to get to know the Minions better on their own.

Apparently, these quirky creatures have been around since the beginning of time. They have only one goal: to find the most despicable master possible. To this end, the Minions are willing to travel the world and search high and low for a dastardly villain to follow and serve. The only problem is that the Minions' enthusiasm often leads — through hilarious circumstances — to their given master's unfortunate demise. After so many of these negative experiences over time, the Minions are disheartened. But three of little yellow guys —Kevin, Stuart, and Bob — refuse to give up. Armed with determination, goggles, and many bananas, they set out to find a new master who can withstand the test of time.

Along the way, we get to know more about their origins, idioms, and individual personalities. Therefore, the Minions movie is just that: a film about the Minions themselves, with the villains they serve on the periphery (as opposed to the other way around). By introducing new villains with whom the Minions interact, the filmmakers demonstrate that the yellow figures are identified by more than just their association with Gru; they are, in fact, their own characters, and totally deserving of their own movie.