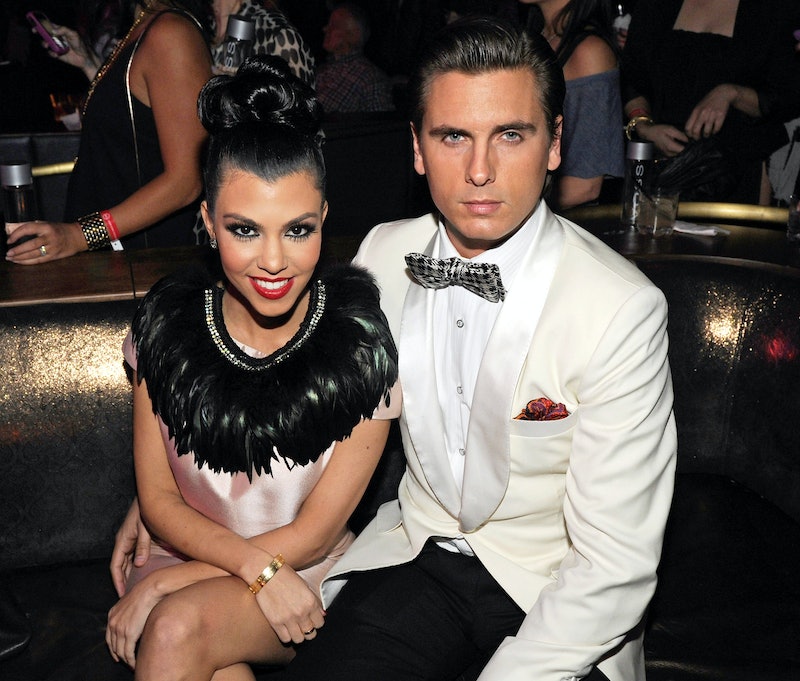 What's the first text message you sent this Monday? Mine was "KOURTNEY AND SCOTT BROKE UP" followed by a string of emoji appropriate to my level of despair, which is high. Kourtney Kardashian and Scott Disick have broken up, AGAIN. TMZ reported from "solid sources" that Kourtney finally had had enough of Scott's partying, and he hadn't even been living in their Calabasas home for over a month. As sad as I am to see the split, largely in part because I'm not sure what that means for Lord Disick's televised future — he's an honorary Kardashian, so we'll still get to keep up with him, right? — I can't say I didn't see it coming. Kourtney has never been shy about calling Scott out on his crap, and he's got quite the handful of crap.

The two got together in 2006 when they met at a party at the house of Girls Gone Wild creator Joe Francis (a bad omen, if you ask me). Since then, Kourtney, 36, and Scott, 32, have had a rocky relationship, to say the least. Much of their heartache, largely in part due to Scott's philandering and general tomfoolery, has been aired on KUWTK, and this breakup is just one of many, though it feels more permanent this time. Kourtney has more than hinted at this breakup for a long time, so she's probably annoyed with all the sadness. Run free, Kourt — as much as I love Scott's penchant for the Finer Things, he really does seem like a jerk

Here are all the ways Kourtney helped us realize this break up was coming before it came.

1. She Never Married Him

Sure, marriage isn't for everyone, but I suspect the reason that Kourtney never married Scott was because she was afraid he would never get past his Peter Pan syndrome. He first proposed to her on camera on Keeping Up With The Kardashians in 2011, but Kourtney said she just "wasn't ready," even after they had been together for more than four years. Scott was hanging on the hook forever after, because the two decided never to get married, which probably means that Kourtney decided they would never get married.

2. She's Broken Up With Him Before

Probably more times than we the people are knowledgable about. Kourtney first dumped Scott back in 2009 after he had been texting a woman in his phone, the contact labeled "My Wife." A Borat joke?! She bounced to Miami as a single lady after their breakup to open a new DASH store with Khloe on Kourtney & Khloe Take Miami.

3. She Gave Him Plenty Of Chances

Things really came to a head in 2010, when Kourtney seemed donezo. The biggest tender spot in Kourtney and Scott's relationship was Scott's history of substance abuse, especially alcohol, and Kourtney told him to give it up or give up his son. On air, she told Scott: "You're not going to be around Mason while you're working on yourself... I can't do this anymore. I love Mason more than you." Harsh? Sure, but necessary. It seemed like after that kick in the pants, Scott scraped himself together, at least for a little while.

4. She Wasn't Ignoring His Cheating

This year has been particularly saturated with rumors that Kourtney "lets" Scott cheat; he called it an open marriage, but one of his "friends" said that Lord Disick supposedly paid a woman a healthy sum to keep quiet about an affair. In hindsight, Kourtney was robably jut too busy living her fabulous life with her amazing kids to give a damn; at least, I hope that she was just probably getting ready to dump him but had to find an adequate window of time.

A toast to Kourtney Kardashian for keepin' it real. On an episode of Keeping Up With The Kardashians in April, Kris Jenner had her birthday party in Vegas, and Scott got crazy drunk, again. It was an uncomfortable echo of a very early episode on the very first season of KUWTK in 2007, when Scott got scarily, violently drunk at Kim's birthday party in the same Sin City. When Kris told Kourtney what happened, she was pissed as all hell, but not surprised. "He's not trying, he's a d***... he's literally schizophrenic," she said.

Whatever the reason that Kourtney dumped Disick on Monday, be it his alleged relationship with his ex-girlfriend Chloe Bartoli or because she was finally, finally fed up with his reckless behavior, I have to a feeling she's gonna be just fine.