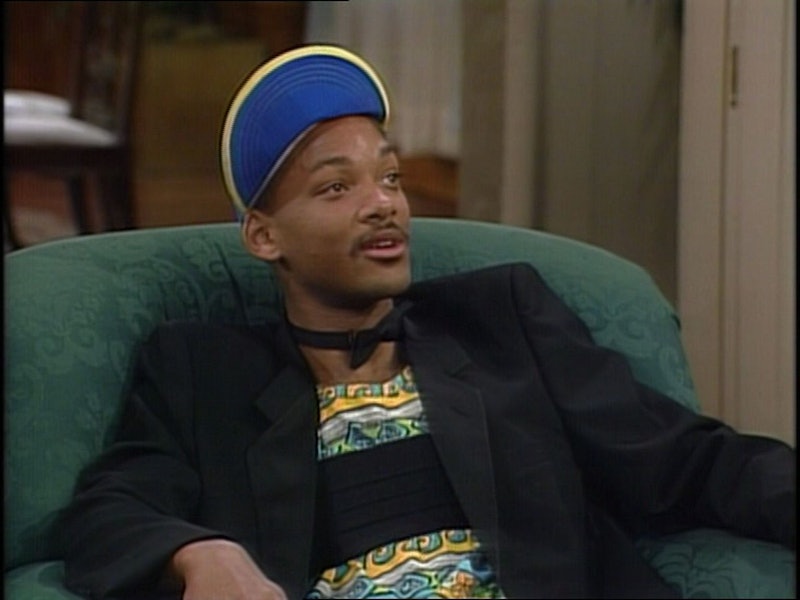 It is blatantly obvious that Will Smith's character on The Fresh Prince of Bel-Air is one of the best characters in television history. From his laid back personality to his hilarious jabs at Uncle Phil and his cousin Carlton, Will was a smooth talking phenomenon who could usually find his way out of any situation. It wasn't just Will's personality that made him so great, though. His fashion choices usually set him apart from his stuffy surroundings. When Will arrived at the Banks' mansion from West Philadelphia, he brought both hip-hop and street style with him. His presence immediately brightened up both Bel-Air and the Banks' home, but Will's taste in fashion brightened it up even more.

From the Jordans on his feet to the plethora of baseball caps on his head, Will — like his cousin Hilary — had '90s swag down. Still, Will's style might strike a modern viewer as a little bit odd, because, most of the time, his outfits are proudly emblazoned with such a '90s feel that they stand apart from anything anyone would wear nowadays. Neon hats and over-sized sweaters with jumbo pockets were the name of the game back then, and, while they are a perfect product of their time, they might seem a little outdated now.

Still, Will Smith was the epitome of extreme 90's style, and we need to celebrate that. Here are 16 of Will Smith’s most dated outfits.

I love jewelry, but this necklace paired with printed harem pants on a man who is well over six feet tall makes Will look like he stepped out of a time machine from the '90s.

I'm all for a guy or gal in a fabulous snap-back hat. But I don't think anyone outside of 1992 can rock a highlighter green cap.

I suppose I should be thankful that these pants aren't of the harem persuasion.

This jacket may have stood the test of time if it was all one color. Unfortunately, it got way too busy with the various colors and the numerous designs sprawled across it. Sorry, you stay in the '90s, jazzy jacket.

Even if you move a Philly boy to Southern California, I suppose he can't be expected to give up his super '90s outerwear.

6. The Shirt That Matches the Polka Dot Jacket

At least Will didn't wear the shirt and the jacket together.

I suppose Will should get points for being creative.

There is so much going on here that I can't help but laugh. This is '90s fashion madness at its best, pairing different prints and different colors into one amazingly bright ensemble.

I really have little room to judge here, considering the fact that I owned several jogging suits during the final decade of the 20th century. Luckily, we have long since left these in the past.

This shirt literally screams "THIS IS THE '90s!" when you look at it. It's so colorful and full of designs that it appears to have been inspired by a children's coloring book.

11. The Socks That Match

When Will wasn't able to find a hat that matched his ensemble, he went to the next best thing: his socks.

12. The Turtleneck and The Leather Vest

The grey turtleneck would have been fine on its own, but, when paired with a leather vest, it became a rocket ship straight back to 1993.

Will's outfit may not be quite as bad as Uncle Phil's. However, his jumbo pocket is so large that I'm certain an iPad mini would fit in it. Not very 2015. (Although, to be fair, I would love a jump pocket to fit my iPad mini in.)

14. The Undershirt Worn On The Outside

Once again, Will's harem pants and side baseball caps have made an appearance. However, the most alarming part of his outfit is the fact that he's wearing his undershirt over his t-shirt. On second though, that might fly at American Apparel in 2015...

I'm all for a nice pajama set, especially one covered in hamburgers. Just not after the year 2000.

16. The Checkered Shirt That Coordinated With The Walkman

The fact that Will coordinated his outfit with his banana yellow Walkman is more '90s than I can deal with.

Thank you, Will Smith, for teaching us all how to dress in the '90s... and how to keep all those style tips in the '90s.

More like this
Bella Hadid Will Think Of Her Spray-On Dress From Paris Fashion Week “Forever”
By Brad Witter
Lindsay Lohan & Jonathan Bennett Celebrated Mean Girls Day Very Differently
By Jake Viswanath
What Does Nancy Jo Sales Think Of 'The Real Bling Ring'?
By The Editors
Twitter Is Unravelling Over Wolverine’s Return For 'Deadpool 3'
By Darshita Goyal
Get Even More From Bustle — Sign Up For The Newsletter