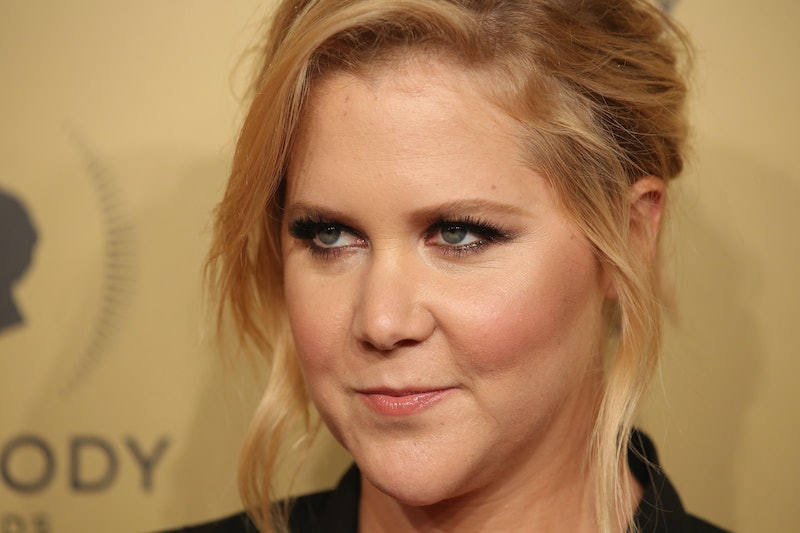 After Amy Schumer responded on Twitter last week to a piece in the Guardian saying she had a "blind spot" on racism, the 34-year old comic opened herself up to questions from Twitter users. On Monday, a week after Amy Schumer wrote her response, the discussion still, thankfully, continues. A Twitter user asked Amy Schumer about one of her racial jokes, asking her what the comic felt her personal responsibility was as a storyteller. Schumer's response to this Twitter user was a big improvement on the general response she posted last week. It's definitely a step in the right direction.

Schumer tweeted that she wrote the "dumb" joke two years ago, and she's owning up to it. "I played a dumb white girl character on stage. I still do sometimes," she wrote on Monday. She went on to say that she is taking full responsibility and apologized if her joke had hurt anyone. The good part about Schumer's second apology is that she came right out and said that she was taking responsibility, and now, she can be held to it. Twitter is forever, and I'm sure this response will be saved as a receipt for many. Schumer also said that she realized her audience is quickly growing, which has helped her evolve as an artist.

The last episode of Season 3 of Inside Amy Schumer airs this Tuesday, July 7 on Comedy Central, but if Schumer is going to continue to engage with comedy about race in her next season of her show, she's gonna have to do it right. In her first apology, she seemed, in my opinion, not as receptive to the criticism, asking for people not to question her because she was "in their corner," and though she can say that she's an ally, asking not to be scrutinized could be counted as a form of silencing.

Her second apology seemed much more sincere than the first. She's in a unique position as a woman — with creative control of her own television show — giving her a lot of space to explore. If she wants to continue to further the feminist agenda, she'll have to take responsibility for her jokes. And that's just what she's done with this second apology.

More like this
Beyoncé & Madonna’s “Break My Soul” Remix Honors A Group Of Black Icons
By Stephanie Topacio Long
Josh Peck Shows Love To Jennette McCurdy After Her Shocking 'iCarly' Revelations
By Radhika Menon
An Ultimate Guide To The Music Of 'Rap Sh!t'
By Brad Witter
Steve Martin Hints That He May Retire After 'Only Murders In The Building'
By Jake Viswanath
Get Even More From Bustle — Sign Up For The Newsletter