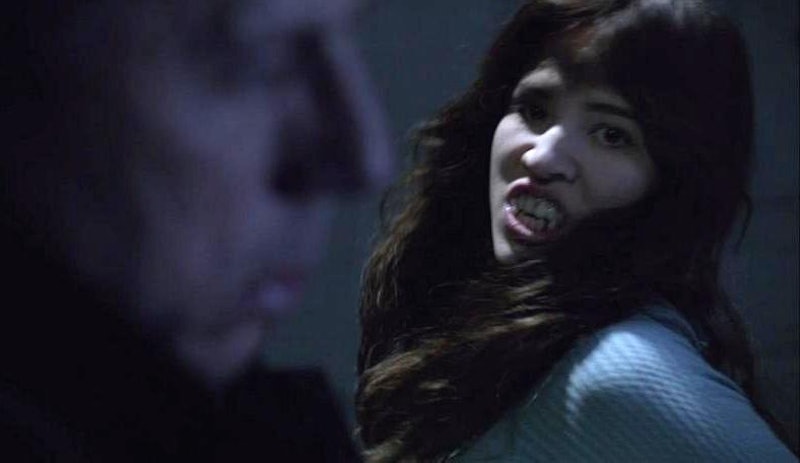 Did anyone else just have the biggest WTF moment thanks to Monday night's episode of Teen Wolf? Yeah, I thought so. I think we can all agree that the ballad of Tracy on the Teen Wolf Season 5 episode "Dreamcatchers" was one of the scariest, strangest and saddest moments in Teen Wolf history. This poor girl's story began as was scared out of her mind by what she believed were night terrors. And in the end, she turned into a killer kanima who murdered her own father. Of course none of these terrible things should be considered her fault as it was clear when the Dread Doctors killed Tracy that she was one of their experiments.

Not only was Tracy not a typical kanima (We miss you Jackson!), she was also shown with the Dread Doctors in the previous Teen Wolf episode where she was awaken to her true monstrous form by the Doctors after they injected her with something. At one point during "Dreamcatchers," Tracy also fainted and spit silver liquid and then at Deaton's office, she was able to paralyze everyone and then get through the circle of Mountain Ash that Deaton uses as protection from and for supernatural creatures. And clearly Tracy is not the Doctors' last experiment, as they also were shown to be doing something truly horrible to recent prisoner Donovan by injecting something into his ear.

So what on Earth is going on? Scott's pack tried to help Tracy face her demons in real life, but unfortunately were too late. However, at least Malia got a glimpse of the Big Bad's for the season and in the promo for next week's episode, she looks pretty afraid. I would be too if I had just watched these terrifying men clad in black and sporting some pretty heavy metalics all over their clothes kill Tracy and then walk away like it was no big deal at all.

What purpose could these Dread Doctors have to make supernatural experiment creatures like Tracey and electric blue claw man from the Season 5 premiere? And why did they destroy their experiment (aka Tracy) so quickly? Perhaps they didn't like that she was able to pull herself out of danger and control and what the Doctors really want are loyal, unwavering soldiers.

I use the word soldiers because it seems like a big war is coming on Teen Wolf. And Scott's pack better arm themselves for what frightening things are awaiting them all.