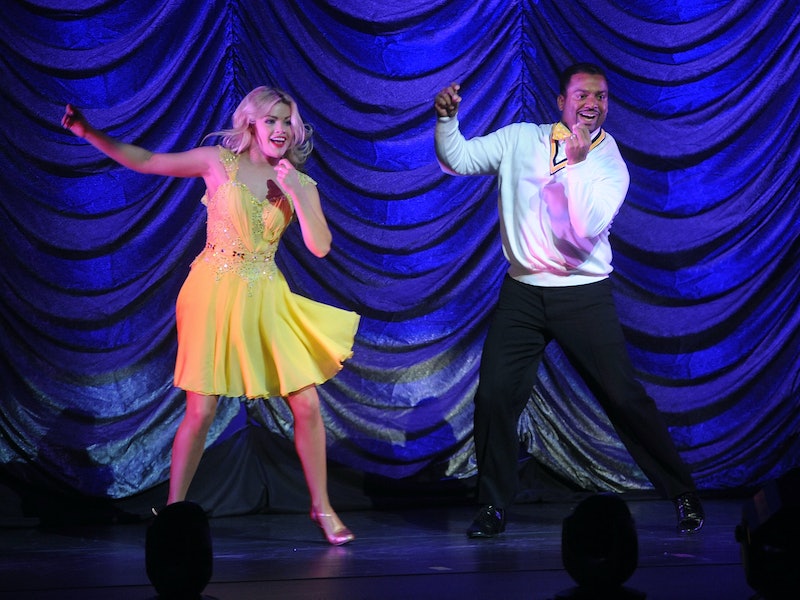 Dancing With the Stars celebrated its 20th season and 10th year on the air last year... if the show were a married couple, Tom Bergeron could have gifted it with a tin-and-china combo anniversary gift. Alas, DWTS settled for a perfectly-on-the nose golden mirrorball trophy and it glittered with the light of a thousand sequins until it was finally awarded to a deserving Rumer Willis and pro-partner Val Chmerkovskiy. It was a pretty exciting year, but I'm already looking ahead to when Dancing With The Stars will return for it's 21st season. Fortunately we don't have to wait too long. DWTS comes back to television September 14 in its regular Monday time slot.

I would put the DWTS cast reveal right up there with holidays that include presents and marriage proposals as far as exciting reveals go. Even though the cast almost always includes the same types of stars, the specific stars with whom the DWTS casting department actually chooses to fill the roles makes all the difference in whether a season sinks or swims (or sashays... ugh). Using a careful equation of casting rumors, dreams, and DWTS archetype assessments, I've got a few recommendations for the DWTS Season 21 cast...

There's a fun little rumor circulating that frequenter of last season's DWTS audience — she was mother to the winner, after all — Demi Moore might be at the front of the pack for casting department hopefuls. Demi fills that perfect Lea Thomspson/Jennifer Grey role of stars we loved in the 80s, we love now, and we'd love to see win.

I would be happy if the entire cast of Season 21 was just players from the US Women's Soccer team, but if I have to pick one, its got to be hat trick extraordinaire, Carli Lloyd... OK, or badass vet, Abby Wambach... or Alex Morgan who's already visited the ballroom in the past to see Hope Solo dance. Listen, this team deserves recognition forever and they're athletic and awesome, just put them on DWTS!

This casting slot could go a few ways. Sure, there's rumor of Ricky Martin who would easily fill the ringer spot, be totally hot and charming, and win the whole damn season. But, let's get creative, here — there's also always usually some sort of Bachelor contestant, and this season we just so happen to have a dancing Bachelorette in Kaitlyn Bristowe, who very well might end up alone at the end of this Bachelorette thing (drama and douchebag guys for days). A Bachelorette arriving at DWTS only to rediscover her passion for dance, win DWTS, and maybe fall in love with a pro along the way is a true American love story.

DWTS loves a good inspirational figure, and while this seems highly unlikely, any DWTS rumor you read from here until the announcement is going to include Caitlyn Jenner. I would love to see her dance; I'm totally inspired by her story, and know others would be even more; I just think she might be kind of busy right now. Of course, I think anyone might find the time once they hear last season's winner, Val Chmerkovskiy, told InTouch, "I’ll be Cait’s partner for sure." And, Caitlyn is an Olympian: A DWTS staple!

The Disney Channel Star role is always an interesting one, because even though I never start out knowing who they are, that mouse doesn't know how to pick some charming kids. There have been the former stars like Corbin Bleu, the more current stars like Zendaya, and the outliers like Riker Lynch. In Season 21, I'm hoping for a little creativity, going way back into the archives for some child stars who just so happen to be having their second coming as current Disney Channel stars... you may have heard of a little show called Girl Meets World? Ben Savage or Danielle Fishel would be obvious hits, but as they've been a little more on our radars in recent years, there might be even more excitement for the remergence of, say, Rider Strong or Will Friedle. Please listen to me on this, DWTS — give me Rider Strong dancing with Peta Murgatroyd!