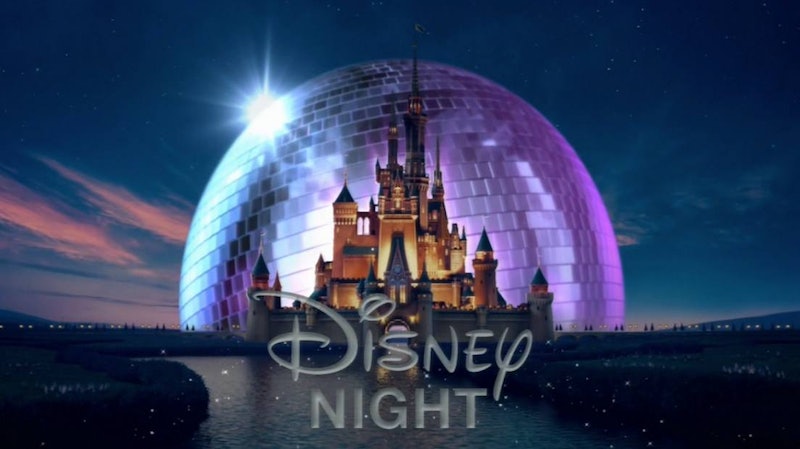 In one of the most-anticipated nights of the season, Dancing With the Stars tackled Disney songs — and they went all out. ABC is an affiliate of the Disney brand, which allowed the show to use licensed material not usually available for this kind of competition-style show. So DWTS took full advantage of what they were offered and it was an amazing production. They brought out live characters like Pluto and Donal Duck, added animated aspects to the live dancing, and created fantastic costumes. The judges' score paddles even had Mickey Mouse ears!

With so many amazing characters to choose from, DWTS had quite a Disney display. Hercules, Alice in Wonderland, The Little Mermaid, Aladdin, and more were utilized by various couples as they competed for the Mirrorball trophy. But if there was an award to be given out tonight, it would go to the costume designers and the makeup team. They transformed the everyday stars into incredibly accurate versions of your favorite Disney princesses and villains.

Tonight was about dancing well, of course. But it was also about the showmanship and wow factor, and these couples nailed it from beginning to end. Check out some of the amazing Disney costumes below.

Ballas is known for going all-out with his costumes, but he really outdid himself with this one. Not only is Shields the perfect Alice, but Ballas' white rabbit is an amazing piece of costumery.

Willis was originally supposed to do a Frozen piece, but she didn't want to be a Disney princess. Instead she asked to be a villian and was granted her wish complete with all-purple Ursula makeup.

The Bachelor braved the stage in a dress-like toga to capture his inner Hercules.

Lynch was so into his character that he walked around all week doing a perfect Captain Jack Sparrow accent. If Johnny Depp's hand injury keeps him out of Pirates 5, Lynch can step in.

They looked just like Hans and Anna from Frozen. It was spectacular.

These two captured the spirit of Aladdin, magic carpet and all.

The two potential lovebirds tackled Mary Poppins, and Herjavec was not subtle about his love for the sexy version of Johnson's costume. They didn't earn a great score, but they did have a great time, which is the whole point of Disney Night anyway. Good times, fun people, and amazing costumes. DWTS knocked this one out of the park.

More like this
This 'Emily In Paris' X 'The Hills' Crossover Is Très Chic
By Marenah Dobin
This 'Bachelor' Contestant Got Back With Her Bachelor Nation Boyfriend After Going Home
By Grace Wehniainen
'Bling Empire: New York' Star Nam Laks Is The “Blair Waldorf Of Thailand”
By Alyssa Lapid
Paris Hilton & Carter Reum’s Relationship Timeline Includes A Surprise Baby Boy
By Bustle Editors
Get Even More From Bustle — Sign Up For The Newsletter
From hair trends to relationship advice, our daily newsletter has everything you need to sound like a person who’s on TikTok, even if you aren’t.